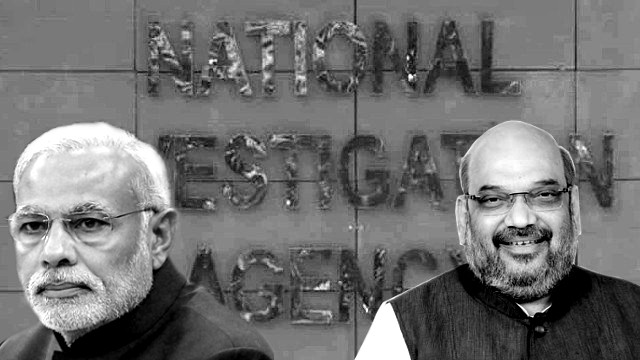 After much deliberation, the National Investigation Agency (Amendment) Bill, 2019, was passed in the parliament with not only the ruling Bharatiya Janata Party (BJP) but even the entire opposition, except a few, voting in favour of the bill. It’s an irony that all opposition members of parliament (MPs), who were opposing this National Investigation Agency (Amendment) Bill, 2019, only a few days back, relented and allowed its passage with their vote in favour of the bill.

A brainchild of BJP’s outgoing president and the Union Home Minister Amit Shah, National Investigation Agency (Amendment) Bill, 2019, proposes to empower the NIA to investigate Terror Crimes relating to Indians and Indian interests abroad, as well as provides enough teeth to the organisation to interfere in the state’s subject of law and order by using terrorism as a pretext. It’s feared that the NIA, which is infamous for its Islamophobia and its soft corner for the Hindutva fascist terrorism, will use the new powers to interfere in the state policing in those parts of the country where the BJP is not in power, particularly in West Bengal, Kerala, etc, which are vilified as hotbeds of “Islamic extremism” by the ruling party and its ideological mentor – Rashtriya Swayamsevak Sangh (RSS).

Since its formation, the NIA has more or less worked to feed the political ambitions of the ruling dispensations. The BJP has officially made it an instrument to legitimise its Islamophobic vitriol by slapping fake terrorism cases against people from Muslim community, while at the same time, coax it to dilute its charges and stop its investigation into the cases of Hindutva terrorism, especially the Malegaon blasts, the Ajmer Shariff blast, the Mecca Masjid blast, the Samjhauta Express blast, etc. Following the RSS’s diktat, the NIA shamelessly dropped terror charges against the notorious Hindutva terror suspects like Aseemanand, alias Naba Kumar, and Sadhvi Pragya, alias Pragya Singh Thakur, accused of running the Abhinav Bharat, a terror outfit that allegedly executed a large number of terrorist attacks throughout India. While Aseemanand is now working for an RSS-affiliated organisation in West Bengal to incite communal tension, Thakur is in the parliament, elected as a BJP MP.

It’s unsurprising that the same NIA that forced public prosecutor Rohini Salian to go slow on the 2008 Malegaon blasts case, to allow a relief to Thakur, who is the principal accused in the case, also got involved in forcefully separating a married couple in Kerala by levelling terror accusations against the man whom a woman, who converted to Islam, married. The case of Hadiya of Kerala vis-a-vis the case of Thakur can prove very well the unhidden agenda of the NIA. Even the recent arrests and a purported “revealing” of an ISIS module in India by the NIA, where it displayed firecrackers and a computer printout of the ISIS logo as prized catch, just before the Lok Sabha election, showed how the agency is hand-in-glove with the RSS and helping it in fuelling Islamophobic vitriol.

In this context, Shah coldly brushed aside the critical remarks made by the opposition MPs regarding the NIA’s obfuscation of facts in the Samjhauta Express blast and Malegaon blast cases to provide leeway to the defence in securing bail and acquittal for the accused. Shah kept reiterating the jingoistic rhetoric over combatting “terrorism”, which can translate into industrial-scale persecution of Muslims through the NIA, by making the latter a neo-Gestapo for the RSS-led Hindutva fascist regime of Prime Minister Narendra Modi.

While Shah’s love for a neo-Gestapo force and his eagerness to interfere in law and order matters of states using the NIA’s privileges can be comprehended from his political allegiance, it’s indeed sheer hypocrisy of the opposition that rather than combating the legislation, which actually wants to interfere in the Constitutional rights of the states, they have supported it en-masse. The opposition to the National Investigation Agency (Amendment) Bill, 2019, was negligible and it shows that despite their tall talks of differences with the BJP and the Modi regime, most of the parliamentary opposition parties have shown how identical they are on the matters of ideology, especially using the arms of the Hindutva fascist state machinery to persecute and suppress the minority communities.

Except for the parliamentary left, most parties have endorsed the National Investigation Agency (Amendment) Bill, 2019. Rather than walking out, which is the next best thing to oppose apart from voting against the bill, most opposition MPs voted in favour of the bill, blurring their ideological differences, if any, with the BJP. Even the parliamentary left isn’t opposed to the NIA or its anti-minority campaigns, rather it’s only concerned about the NIA becoming a super organisation in India.

With the amendments to the Unlawful Activities (Prevention) Act, and the National Investigation Agency (Amendment) Bill, 2019, the Modi regime is trying to tighten the noose around the people’s neck and using its brute majority in the parliament it’s trying to establish the official corporate-feudal dictatorial regime — the Hindu Rashtra — which will eventually undo the minimal democratic space and a few rights that the common people, the working class, the peasantry, the toiled masses, especially from marginalised communities, have enjoyed so far. Even the right to voice an opinion, even the right to think differently than the ruling dispensation or differ with it ideologically will be grounds for persecution.

Despite the betrayal of the parliamentary opposition, there is an ardent necessity to resist these draconian laws and attempts by the Modi-Shah duo to intensify the fascist reign. The neo-Gestapo NIA or the draconian UAPA can’t be allowed a free reign against the minority communities and marginalised people; the Indian ruling classes must be stopped from gagging free voice and tormenting the dissenters by using these forces and laws. This can’t happen without mass resistance and without exposing the hypocrisy of the parliamentary opposition. The delay in building mass resistance against these anti-people measures of the Hindutva fascist camp will only embolden the spirits of Modi-Shah and their sycophants, and repress the marginalised communities. To ensure that this fascist clique can’t inflict any more injuries to the people, to ensure that the people’s democratic rights are protected and their struggle for emancipation is strengthened, the anti-fascist, democratic forces must go to the grassroots, educate the people about the peril of Hindutva, organise them and empower them to lead the struggle that’s essentially theirs.