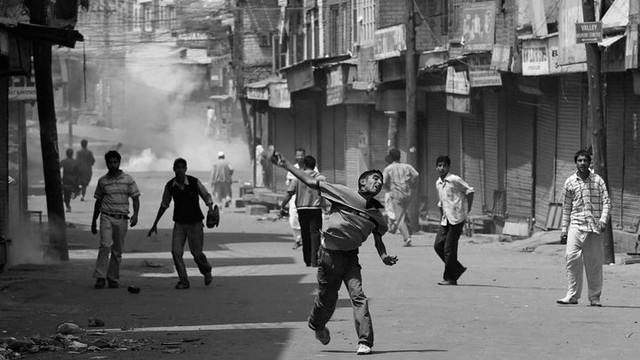 Jammu & Kashmir ceased to be a state in the parlance of Indian governance. Now, the erstwhile Dogra kingdom that acceded to India after committing a heinous genocide killing 237,000 ethnic Muslims in Jammu, is split into two union territories — Jammu & Kashmir and Ladakh — to be directly ruled by New Delhi. The bifurcation of Jammu & Kashmir, following the scrapping of Article 370 and Article 35A of the Indian Constitution through an utmost illegal route by Prime Minister Narendra Modi’s Hindutva fascist Bharatiya Janata Party’s (BJP) regime has got huge support from the upper-caste Hindu elites and urban middle class of India, who, immersed in extreme bigotry and xenophobia, want to hold on to the Kashmir valley, sans its eight million, largely Muslim, population.

The domination of Islamophobia on the psyche of this politically crucial bloc — which not only votes but also influences the voting pattern of those below them in the class-caste pyramid — has provided an extreme advantage to the Modi regime and the BJP. Modi and his party have been able to thwart any anti-incumbency wave over the rising unemployment, higher taxes, and rapid slumping of the Indian economy, mired in an unprecedented demand crisis, by playing the Kashmir card and using the Muslims as the regular punching bag.

Thus, despite a faltering economy, Modi and the BJP are able to sail through assembly elections using chauvinism as their weapon. The formula of jingoism that the BJP and its ideological mentor — the Rashtriya Swayamsevak Sangh (RSS) — have employed repeatedly since the 1999 Kargil War, came to their rescue even in 2019. From using jingoism over a purported victory against Pakistan in Balakot to the bait of integrating Jammu & Kashmir with the rest of the country by scrapping the very Article 370 that formed the basis of the princely state’s turbulent relationship with India, which later turned into blatant colonial occupation, the Modi regime has repeatedly triggered xenophobia and jingoism among the Indian upper-caste Hindu elites and urban middle-class to get a pat in the back and sail the rough tides of assembly elections in states like Haryana and Maharashtra, where it never had any independent standing prior to 2014.

Today, when the Kashmir valley is under a brutal military blockade since 5 August 2019 — the day when Amit Shah, Modi’s close aide-cum-Union home minister, scrapped Article 370 and bifurcated the state — with the majority of its eight million people living in an incommunicado state due to a blanket ban on communication through snapping of mobile phone, landline telephone, internet and cable television, when its people are locked in their houses, their newspapers are censored and all political activists, leaders, organisers or influencers, as well as common people, including children as young as nine, detained under the draconian Public Safety Act, which allows the state to keep someone imprisoned for two years without trial, then urban India, upper-caste Hindu India, the elite India, the Fab India-lover India, the mall-hopping India, the consumerist India, the brand-aware India, the plethora of Indias in one India that’s distanced from the agony of millions of hungry, exploited and oppressed people, is indifferent to the plight of the Kashmiris whose Kashmir they call their own. In this indifference lies the socio-political victory of the BJP and the RSS’s communal engineering scheme. In this indifference lies the fallacy of democracy.

Thus, when the Indian press and its ruling party’s diehard supporters can cajole people to come out on the streets with candlelights to protest the death of 42 central paramilitary soldiers killed in a doubtful militant strike in Pulwama in South Kashmir, a conspicuous silence reigns on the agony of the Kashmiris caged in their houses, incommunicado, in a state of wilderness, amidst a beleaguered territory they call home just because of their identity and their reluctance to show obeisance towards Indian hegemony like a handful of Indian lackeys would. Therefore, when suddenly an unidentified group of assailants spray bullets at five migrant Bengali workers in Kulgam of South Kashmir, no self-styled patriots come out to protest, no one does an analysis of the reason of the massacre and what’s the objective behind killing poor migrant workers who had a cordial relationship with their Kashmiri employers.

The shrilling indifference, the bile-inducing silence over the killing of migrant workers in Jammu & Kashmir vis-a-vis the boisterous showbiz over the killing of soldiers who went to Jammu & Kashmir, armed to the teeth, to fight Kashmiris, can be due to the class and communal identity of the victims, who happen to be hapless Bengali Muslims, the very community the ruling BJP and the RSS have stamped as “termites”. The nonchalant attitude of the Indian mainstream press and the opinionated upper-caste Hindu elites and middle-class about the brutal suppression of human rights in the Kashmir valley, the repression laden by the Indian state on the Kashmiri people can be accredited to the religious identity of the victims — Muslims — which prevents the rumbustious, self-styled patriots from calling them their own, though the land of the Kashmiri Muslims, each inch of it, the Kashmiri women and Kashmir’s resources are drooled for by these Hindutva-incensed men.

So, while Kashmir, brutalised to the core, flogged and mocked repeatedly, continues to wail yet determinedly navigates the path that would take it to the realm of emancipation, the new India of Modi, where the RSS and the BJP’s big-ticket donors — the big foreign corporations, their Indian crony-comprador lackeys and usurers — do rejoice bifurcation of Jammu & Kashmir, its formal colonisation, is actually not ashamed of tormenting and oppressing the Kashmiri people because the Kashmiri identity epitomise courage to oppose Indian occupation and hegemony.

It’s true that the Kashmiri people, who went through a tortuous course since the last three decades, experienced macabre atrocities committed by the Indian state — from the killing of more than 100,000 Kashmiri people to sexual violence against women, maiming of thousands, including children as young as few-month-old — didn’t keep any faith in India’s morality. They knew that India will never cease to brutalise them and enforce the Hindu-supremacist Indian identity on them. Therefore, the majority of Kashmiris didn’t trust New Delhi; those who did or those who carried New Delhi’s water, like the three former chief ministers languishing in Indian detention centres now, didn’t get any respite either. They too are reduced to their immediate identity and shown their rightful place in the Hindutva fascist kingdom.

Thus, against Modi’s whimsical fancy, against the RSS’s vision of taming a rebellious Muslim people with ethnic cleansing and demography change, the Kashmiri people, despite the unprecedented blockade, aren’t giving up their struggle but are uniting and are resisting with valour against a mighty state machinery that hates them for their identity. By using propaganda tools, lackey media outlets, or sponsored private visits of the members of the European Parliament, the Modi regime can’t change the narrative on Jammu & Kashmir, can’t create favourable optics and dupe the world for long.

The Indian state under Modi has appeared nakedly as the aggressor in Kashmir, without the topping of sweetness and democracy that Modi’s predecessors marketed with vigour to cover up their complicity in a grave crime committed against humanity in the history of mankind. Though the Kashmiri people have suffered a hindrance with the bifurcation of Jammu & Kashmir and making it a union territory but still, their struggle didn’t stop. It just got better, stronger and larger, assuming a gigantic and epidemic proportion that Modi and his coterie can’t curb anymore.