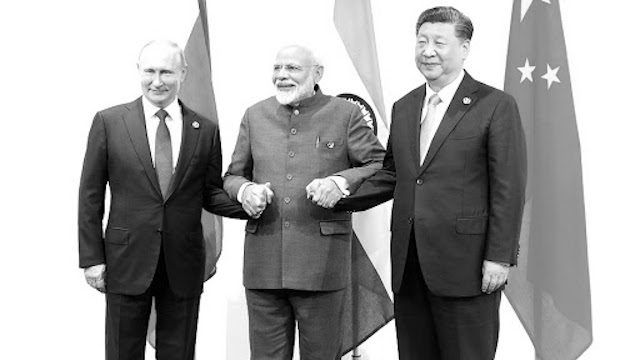 Authoritarian populist leaders come to power because of their direct appeal to the people through the unconventional approach to leadership and a kind of detestation of the traditional elite. Generally, authoritarian populist leaders tend to be narcissistic. Oxford Dictionary defines a narcissistic personality as someone with selfishness, involving a sense of entitlement, a lack of empathy, and a need for admiration. So, their leadership style is quite personality-oriented. They assume that their charisma is what gives them authority. Hence, they tend to ignore the time-honoured traditions and practices of the position that they occupy such as accountability. A reason why Indian Prime Minister Narendra Modi resorts to his monotonous radio programme “Mann Ki Baat” (words of the mind) rather than an open press conference.

This happens also in their approach towards governance, where they would bypass traditional diplomacy and project themselves as the centre of authority. Modi’s dealings with other countries and leaders show many examples of his personalised style of diplomacy. All power is concentrated within the Prime Minister’s Office (PMO) and all other ministries and ministers hardly have any power. How many ministers’ names or portfolios do people know? All personal secretaries of different departments are supposed to report to the PMO. Also, given the nature of personalised approach, no dissent is tolerated, and no talent is entertained in the matter of governance.

All those who are perched at the higher echelon of power as bureaucrats and ministers were either Modi’s loyalists from his Gujarat chief ministership days or those nameless and faceless imbeciles from the ruling dispensation whose qualifications are communal hatemongering or incessantly praising Modi or his chosen successor Amit Shah. As far as talent is concerned, all those appointed as specialists and advisors were sent back at the end or even before their terms ended. Think about Aravind Subramanian, Aravind Panagariya, Raghuram Rajan and many other experienced experts. Even Modi’s blue-eyed boy Urjit Patel left halfway during his tenure as Reserve Bank of India director.

Propaganda and bravado are the staple

Everything was done and money is spent on image building or project the Supreme Leader’s power. The Bharatiya Janata Party (BJP)-led National Democratic Alliance (NDA) government has spent Rs 60 billion behind the image building exercise of Modi and his rule. During the last six years, Modi has spent Rs 4.46 billion for his foreign tours.

So far, in his 59 foreign tours, Modi has been projected by the BJP as a leader of international stature and a popular statesman. What is the outcome in terms of policy and returns? Did any country bring investments to India? If they did Modi’s pet project “Make in India” would not have been a fiasco. Can we recall Modi diverting a flight to Pakistan to greet Nawaz Sharif (Biryani visit) during the early days of his premiership; meeting Xi Jinping on a swing at Sabarmati Ashram, or treating Donald Trump (“Namaste Trump” event) and Barak Obama (“my friend Barak”) as personal friends?

Modi even allowed Pakistan’s intelligence agency ISI to come and investigate a terror attack by their proxies on an Indian military base at Pathankot. Despite all these whimsical acts of hubris did any country stop bullying India? What did Trump do? He bullied and imposed tariffs. What did Xi do? Pakistan never stopped infiltration. Even India’s closest Nepal is entangled with India over a territorial dispute.

Besides, India could never get a permanent seat at the United Nations Security Council. Did any country call Modi to side with India over its recent conflict with China? If they have done so the people aren’t aware of such a gesture.

Hence, Harish Khare is absolutely right when he points out the flaws in Modi’s style of governing that has led the nation to this sorry state despite professing a strong leader image. Referring to the colossal all-round failure in Delhi in gauging what was happening with our relationship with China he writes:

“…. why did we misread the evidence? That too, when we have the institutional blessing of a new chief of defence staff, with a much-touted promise of taking our national security to a higher level of efficient planning and preparedness. However, we also do know that evaluating “agencies” – from the Enforcement Directorate to RAW to Military Intelligence – have an incurable habit of rigging their assessments, inferences, conclusions to suit the political masters’ expressed or divined preferences. The result has been a humiliating loss of face.” (sic)

How the overbearing personality of Modi and his penchant for concentrating power under his tight fist has led the nation to this situation is further described by Khare in the following harsh words:

“Nonetheless, it is being suggested, rather insincerely, that the nation needs to close ranks behind the government and its Supreme Leader in this moment of ‘crisis’. But national interest also demands we recognise that if we find ourselves in a tight spot today, it is because the system has croaked under the weight of a prime ministerial overload. Unless we are willing to concede this debilitating burden, the country may find itself saddled with another crisis, with unforeseen consequences.” (sic)

Modi has left no stone unturned when it comes to politicising and benefiting from propaganda and bravado using little things that he achieved even while destroying the federal and democratic character of India. His divisive, anti-elitist, populist rhetoric has managed to carry him across despite his economy-destroying demonetisation and flawed Goods and Services Tax implementation. His propaganda and Pakistan bashing have carried him over to another election victory with a larger margin despite his flawed economic policies that resulted in a 45-year-high unemployment, rising poverty index and curtailment of civil liberties.

Claims are that even his biggest failure to control riots in Delhi while Trump was visiting India and his whimsical decisions about COVID-19 lockdown that brought untold misery to migrant labourers and small businesses have not affected him personally. However, this China fiasco has exposed all the bravado and propaganda of Modi and Hindutva politics, which is so successful in garnering votes. It has exposed that Hindutva’s bravado is all about the weak neighbours such as Pakistan, Bangladesh, Nepal and especially against the minority Muslims of India.

It has exposed the 56-inch chest of Modi that is ready to show “Laal Aankh” (red eyes) only against the weak but he easily folds or falls silent before the powerful. If Trump bullied him for Hydroxychloroquine supply when India itself was facing a shortage, he sent it readily, and now, he capitulates before China’s Xi. The Supreme Leader and his sidekick (Shah) do not even appear before the press to answer questions. The Modi (Godi– lapdog) media is trying to protect the Supreme Leader’s image even if that means blaming the military for the failure.

Harish Khare’s statement “…. national interest also demands we recognise that if we find ourselves in a tight spot today, it is because the system has croaked under the weight of a prime ministerial overload” exposes all that is rotten and deadwood under Modi’s authoritarian and paranoid administration.

Need we say, how the BJP’s response to the China crisis will unfold? Yes, soon the entire BJP apparatus (IT Cell, spokespersons, and the media lapdogs) would be on the lookout for a scapegoat to save the sagging image of a callous and narcissist Supreme Leader. Let’s see it unfolding before us.