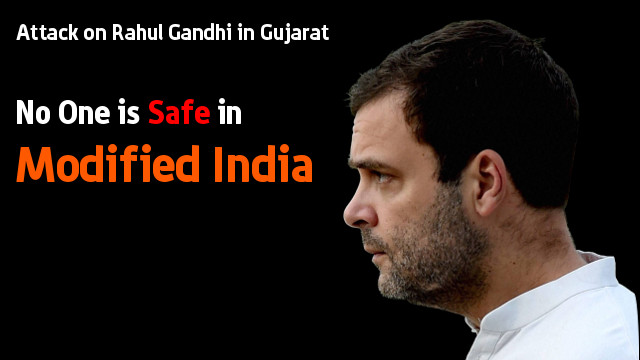 The Congress Vice President Rahul Gandhi was attacked by the BJP goons, during his Gujarat tour, where we went to take stock of the flood situation that is prevailing in the BJP-ruled state. The Sangh workers threw stones at the car ferrying Rahul Gandhi and it injured his PSO. Rahul Gandhi and the entire opposition forces strongly condemned the heinous act of the ruling BJP and shamed the RSS-led Hindutva camp for using violence as an official weapon to gag the opposition.

The BJP government of Gujarat, led by Vijay Rupani, and the Narendra Modi-led central government remained unapologetic about the attack, rather the BJP leaders in Ahmedabad and New Delhi started accusing the Congress leader of self-inflicting the attack by touring the flood-affected areas and even cited the terrible condition that prevailed in the country during Indira Gandhi’s tyrannical emergency rule to justify the violence against Mr Gandhi. The Congress Party was blamed for playing politics out of an issue, which itself is a very much politically motivated issue.

While it’s true that Rahul Gandhi is truly a pathetic leader in the opposition bench and his party, the Congress, is the replica of the BJP in all matters, except the latter’s open adoration for the Holy Cow, still an attack on a political leader, who happens to be one of the principal opposition figures in the country after Nitish Kumar’s volte-face, cannot be considered normal and brushed aside from the discourses, as per the wish of the BJP and the RSS.

Such an attack on a parliamentary party leader like Rahul Gandhi in Gujarat shows the impunity with which the BJP and its Hindutva allies operate in the state, which is the alma mater of Narendra Modi and is one of the major Hindutva laboratories in the country that helped the present dispensation to be what it has become. It must not be forgotten that the Congress Party was equally popular to the big corporations who are now placing their baits on the Narendra Modi-Amit Shah clique and the saffron camp headed by them.

Rahul Gandhi is not a random left-wing or democratic activist who can be heckled at the will of the ruling classes anywhere in the country. To launch an attack against the Congress heir apparent, the BJP must have secured permission from its masters like the US-based foreign monopoly and finance capital and their Indian crony and comprador lackeys. Rahul Gandhi was attacked because the ruling classes now want to portray only the BJP as its true representative and want to sideline the Congress Party, which has lost its credibility before the masses and cannot hoodwink the people for long anywhere.

If a leader of the stature of Rahul Gandhi can be attacked with such impunity and the culprit leaders of the RSS and the BJP can remain aloof from the arms of the law in a state where the administration is clearly biased against the Muslims, Dalits, tribal people and other marginal sections of the society, then the message is clear – the attacks on the genuine opposition, i.e. the people’s opposition, the resistance erected by the progressive and democratic forces against Hindutva fascism, will be far more intense and barbaric than the trial show on the cosmetic opposition leader.

Throughout the country, the RSS and its mass-organisation, the BJP, has created an environment of intimidation, through which it can eliminate anyone who dissents or challenges the hegemony and juggernaut of the Hindutva camp. The Modi regime has resorted not only to witch hunting using the central agencies like the CBI to bully those who dare to oppose its government, but through lucrative baits involving a huge amount of money and share to secure power, it’s also luring the key figures in the opposition parties to join its bandwagon.

It was in Gujarat that the RSS and the VHP members committed the goriest atrocities against the Muslim community during the 2002 pogrom. It was in Gujarat that the Amit Shah-Narendra Modi clique experimented their media management skills by cleansing the blood-trailed track record of the BJP government and by veiling the incidents of state-terror unleashed upon the members of the minority community through a series of staged encounters. It was in Gujarat that the comprador and crony capitalists of India and foreign capital found a paradise of loot and plunder, as the unity of the working class and the toiled people was wrecked by the communal vitriol that the BJP carried out incessantly.

It was Gujarat, where the Gau Rakshaks could publicly flog the hapless poor Dalits in Una accusing them of cow slaughter and thereby fuelling a nationwide anti-Brahminical movement that cost the then Chief Minister, Anandiben, her job. Despite promoting an artificial mode of vegetarianism throughout the country, it’s a pleasure for the RSS-led Hindutva camp to devour the blood of human beings from Dalit, Tribal and Muslim communities in states like Gujarat, where death of Muslims and Dalits in the hands of the RSS goons never make up to the TV stations, which would otherwise shed gallons of tears over the death of RSS men in Kerala.

While Rahul Gandhi’s party, Congress, has its own dark past, including the usage of its own mercenaries at different periods of time to crush the opposition and to bully the career-politicians, that past cannot justify the violence unleashed by the ruling BJP on the leader and his supporters at present with only one intention, to drive away opposition and to silence any critical voice that questions the fascist instincts of Narendra Modi-led government. Rather than building an opposition to the Congress and its dangerous and reactionary politics, the BJP actually is taking forward the heinous policies of the arch-reactionary party of India to greater heights.

Despite calling themselves a party with a difference, the BJP has walked on the path of the Congress and implemented all its policies and agendas in the economic sphere. The Modi government is actually replicating the Congress Party’s style of functioning and methods of governance, minus the cow, as former BJP leader Arun Shourie would put it as. Narendra Modi and his coterie implemented the very neo-liberal economic policies that the Congress championed since the early 1990s and sold the country to the foreign monopoly and finance capital more vigorously than what the Congress could have under the leadership of a seasoned American stooge like Dr Manmohan Singh.

Through the method of intimidating the opposition leaders, the BJP is foraying deep inside those terrains where it was a non-factor a few years ago. It’s pressurising the West Bengal government run by Trinamool Congress, which was its previous partner-in-crime, to allow a greater share of power to the party in the state where it’s successful in building up communal polarisation of Hindus, especially the non-Bengali upper-caste Hindus and Bengali backward caste and Dalits in most of the urban areas.

In Kerala, the RSS is constantly flaring up communal clashes with the ruling CPI(M) cadres and using the gory violence to build up mass opinion against the parliamentary mainstream left, which is also a lackey of the neo-liberal economy despite firing occasional salvo against capitalism and imperialism, to ensure that an elected government can be toppled and a makeshift BJP rule is allowed in the state that can build up a broad base for the Hindutva camp in the very state where it was always defeated by other political forces.

After being reduced to a scooter-riding tally of three in the Delhi Assembly election, the BJP managed to cripple the AAP government by eroding the party’s MLA base and by intimidating and trolling the government throughout its tenure. The AAP has lost considerable support base due to its phrase-mongering hollow politics, but also it lost a lot of its members and leaders to the constant poaching exercise by the BJP. Leaders like Kapil Mishra, who came to the AAP from the RSS and other leaders like Kumar Vishwas, etc. are eagerly waiting to dislodge the government led by Arvind Kejriwal and reinstate the BJP in the ruling clique in lieu of lucrative deals.

In Bihar, Nitish Kumar’s sudden volte-face and joining the BJP’s camp using the pretext of the CBI raids and charge sheet against Tejaswi Yadav, his now-former deputy CM, has shown how much influence the BJP and the Modi regime can exert on its opponents to make sure that the Hindutva cavalcade remains invincible in the parliamentary arena. The BJP is unapologetic about its quest for a Brahminical theocratic fascist rule by 2021-22 and it will go to any extent to achieve it. Politically the parliamentary opposition has turned bankrupt and hence it’s deprived of any strength to put up a successful resistance against the Modi government’s heinous agenda.

Political forces outside the parliamentary arena that are working hard to erect a strong resistance against the BJP’s Hindutva fascist rule, must stand up against the bullying and intimidating tactics, now employed in public by the Modi regime to destabilise any dissent. It’s not a question that the likes of Mulayam, Lalu, Mayawati and Mamata are deeply involved in corruption, the leaders of the BJP, from Shivraj Singh Chauhan to Narendra Modi, have been accused in scams and corruption cases also, rather it’s a question of preserving the right to dissent and to oppose the moves of the government following the provisions of the Constitution.

The BJP and the Modi government, which keeps drumming its purported success stories, must now also drum the fact to the people of the country that the government that comes to rule the country by winning a general elections becomes the custodian of the very Constitution that rules the land. It must not therefore overturn the Constitution and snatch away the hard-won rights of the people, as the Indian people, whose votes can be bought easily by the RSS’ men, are known best for their struggles for democracy and through people’s movements they can surely bring down the Modi government in a similar way they fought to end the tyranny of Indira Gandhi during the emergency.

Clever people do read the writings on the wall at the right time. It’s only the muddle-headed fascists who dare the might of the people and thereby gets wiped off from the lands that they rule with iron fist. The attack on Rahul Gandhi is not just done with the intention of bullying the parliamentary opposition, it’s also done to express the frustration that is growing within the RSS-led Hindutva camp over the rising discontent of the people against the Modi regime, which bears the potential to cripple the very iron rule that the saffron fascists are determined to laden on the people. Their frustration shows clearly that they are certainly travelling on the highway to doom.