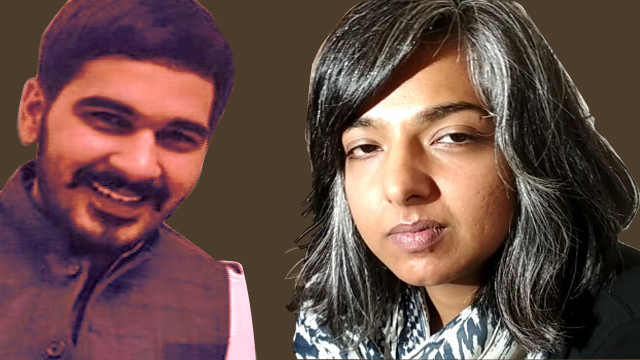 The national media is now filled with the cliches about how the powerful and the rich in India can get away with justice using their influence, following the uproar created by the recent incident in Chandigarh, where the Haryana BJP President Subhash Barala’s son Vikas Barala tried to allegedly kidnap a girl driving home. The survivor of the incident said that the accused men, Vikas Barala and his friend Ashish Kumar, chased her car on the streets of Chandigarh and tried to stop her and take her out.

Since the incident was reported, the case has gone through several ups and downs as it involved the “prestige” of the BJP chief and RSS strongman of the state who also handles the fascist Hindutva stormtroopers. As usual, following the feudal-patriarchal scheme, the family members of Vikas Barala and the larger Hindutva fraternity on the payrolls of the RSS, started victim shaming over internet and television.

The deputy to Subhash Barala in the Haryana BJP, Ramveer Bhatti, a sworn RSS mobster, questioned the character of the victim and raised the age-old patriarchal question regarding why a woman would be out of the house at late night. It re-exposed the hypocritic RSS outlook, which is eternally patriarchal and horrendously feudal and no wonder it came from the BJP leader from a state where the feudal-patriarchal domination has ensured that girls are killed before and after their birth and also if they dare to love someone outside their caste-lines. It’s purely this patriarchal and medieval outlook that is prospering the BJP in a state where it remained a non-player even a few years ago.

BJP spokeswoman Shaina NC, a former fashion designer, tweeted an old irrelevant image that were first taken from the survivor’s Facebook account by an advocate of the Supreme Court infamous for his fake image circulation, and then claimed that she was friends with Vikas Barala, a clear indication that the saffron party is determined to derail the legal processes, quite opposite to what Haryana’s Chief Minister Manohar Lal Khattar’s claims at the initial stage of the probe.

Varnika Kundu, the 29-year-old daughter of a serving IAS officer- Virendra Kundu, firmly fought against the patriarchal slurs by saying that it’s none of the business of the BJP leader what time she should return home. In an interview to NDTV, Ms Kundu said:

“It is none of his business, it is my business and my family’s what I do and where…If it wasn’t for men like these, I wouldn’t be unsafe going out… whether it was 12 am or 2 am or 4 am.”

“If it happens at night it’s my fault? Can the men not control their urges at night? Why am I being questioned? I am the one who was under attack…but they are not questioned…”

Earlier Ms Kundu said in her statement on social media that being a daughter of an IAS officer she feels secure but wonders what would have happened to her if she was a daughter of an ordinary man when the perpetrators of such crimes are powerful people.

“I’m lucky, it seems, to not be the daughter of a common man, because what chance would they have against such VIPs? I’m also lucky, because I’m not lying raped and murdered in a ditch somewhere,” (sic) Varnika Kundu said over a Facebook post after the incident.

Though she praised the police force for coming to her rescue on time, the police have dropped the non-bailable charges against Vikas Barala and Ashish Kumar to let them slip off by obtaining bails. The police, under the not-so-secret direction from the BJP brass, is trying to dilute the case to ensure that the BJP leader Barala can resolve the matter outside the judicial premises by intimidating the Kundu family and by bringing them down to their knees by using his influence, money and muscle power.

There are questions raised over the dropping of the serious allegations against the accused by the police and how the police have retracted from their initial position on the case. Despite the assurance from the top brass of the Chandigarh Police regarding taking the accused to the justice system and helping the survivor to get justice, there have been several lapses in the case, especially the suddenly missing CCTV cameras installed on the roads where this incident took place. Almost all cameras and their footage are missing, which will eventually help the Baralas to score points over the Kundus in the court.

Virendra Kundu understood what lies ahead and took a firm determination to seek justice for his daughter even if the path ahead is tortuous and the scope of getting justice is bleak due to the political and socio-economic standing of the accused. The character assassination campaign of Varnika Kundu started by the BJP IT Cell members over the internet has shown Mr Kundu the strength of the foe, who are all but unapologetic criminals trying to have their way to establish a fascist dictatorship in the country and overturn the Constitution in force.

Haryana remains a state that is infamous for its crime against the women and the overtly feudal dominance in the countryside. It’s no wonder that Vikas Barala and his friends, intoxicated with power and influence of their parents, are keen to rule over the streets of the town with an intention to flaunt their power and money. It’s not a surprise that the entire political spectrum of the country is filled with numerous Vikas Barala type scions of political dynasties, who mostly have their roots in the feudal production relation. Through such horrible crimes and by flaunting money and muscle power, such youth from rich families make themselves available for the launchpad of the right-wing parties and become leaders of the future. We cannot forget the incidents of stalking of women by Amit Shah and many other such politicians of the ruling saffron brigade.

The feudal political structure, dynastic rule and utmost disrespect for women who are free thinking and raise questions, make men from the powerful families commit crimes against women with an intention to “teach women a lesson” of Brahminical patriarchy. As Varnika Kundu was alone, driving a car on her own, therefore, she automatically became a game for these young mobsters of the RSS, as their patriarchal libido would not have been satisfied until they taught such women a lesson through rape and other forms of gender violence.

Rape and gender violence is an important weaponry in the arsenal of the RSS-led Sangh family, which is used more often to subjugate the Dalit, Adivasis and women from minority communities. It’s a practice that has paid huge dividends to the BJP, which stormed to power in states like Uttar Pradesh, Gujarat, Maharashtra and Assam, where it rapidly used gender violence to incentivise its foot soldiers. Even the Hindutva ideologue, Vinayak Savarkar advocated rape as a political weapon to intimidate the Muslims and castigated Hindu rulers for not using the weapon of rape more often.

It was when Narendra Modi ruled Gujarat that the world saw the goriest atrocities, especially gender violence unleashed by the RSS stormtroopers who cut open the womb of pregnant women, after raping and murdering them, to take out the unborn foetus and then burn them to satisfy their quest for blood and domination. Therefore, it’s very infantile to expect the BJP and its top brass to empathise with the pathetic condition that the women in India are subjected to and come to their rescue leaving behind their masculine Hindutva fascist ideology.

In India, even being the daughter of a long-serving IAS officer, Varnika Kundu can face so much wrath from the Hindutva hate mongers for raising her head against the BJP leader’s son. What would have happened if the Sanghi goons would have targeted a poor and hapless peasant woman from a Dalit family in the hinterlands of Haryana that night? Who would have come to the rescue of such a woman that night and how much media coverage would have the case got?

Every day, thousands of rapes are committed in India and in 90 percent of the cases, the perpetrators are known to the victims. Rather than addressing the core issue of the feudal-patriarchal system that reigns till this day and empowers men with a sense of being superior and thus free to take women for granted, the entire exercise in the country to protect women remains largely cosmetic and is centred around reforming a system that can never be fixed.

All women, who are victims of gender violence in India, especially women from the Dalit and Adivasi communities, women from the Muslim and other minority communities, cannot stand up with firmness and determination against the perpetrators of gender crimes due to their weak socio-economic condition in a largely semi-feudal and patriarchal country. They are left with no scope but either to get killed by the powerful or be isolated from the society, which will proactively shame the victims than the oppressors.

The women of India needs the political power for themselves than having the men rule over them using the feudal yardsticks of morality and justice. In a 21st century world, the ideas of patriarchal puritanism, like the one preached by the RSS-led Hindutva moralists, stinks as badly as rotten corpses of one million rodents. It becomes imperative for the women themselves to take up the fight, more daringly than what Varnika Kundu did to save her life, to ensure that a just, egalitarian and gender-violence free India can be built upon the foundations of democracy and freedom. Until then the likes of the BJP leaders, who would love intimidating women and shame them for being independent, will rule over the country in their most disgusting ways.