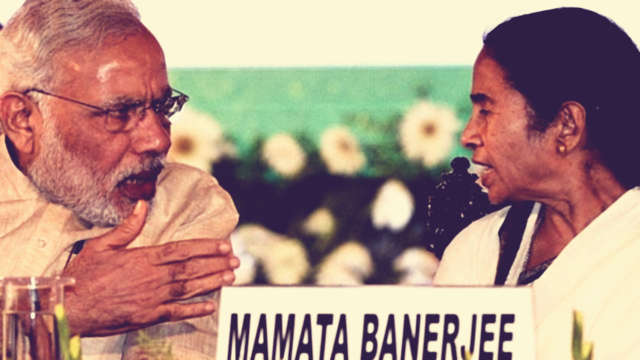 West Bengal is experiencing a paradigm shift in its political theatre as the BJP and the Mamata Banerjee-led ruling Trinamool Congress entered into a cut-throat competition to outdo each other in playing the game of communal polarisation. The state that was once called the oasis of secularism in a country that is ravaged by communal carnages and large-scale genocides, is now sliding into the same gutter hole in full public view, which the middle-class of the state considered obnoxious a few years back.

Mamata Banerjee is waging a sham battle to showcase her “secular credentials” in West Bengal against her yesteryear partner, BJP, a party that her party helped to entrench deep inside the state along with a plethora of Hindutva fascist organisations in the late 1990s when she forged an alliance with them to become a minister in the central cabinet and chalk out her own independent political career.

In her political rhetoric, Mamata Banerjee will often accuse the Narendra Modi government of dividing the nation into the lines of religious identity, oppressing the Muslims and Christians, discriminating against the Muslims and above all, killing the minority community members with impunity to score political leverage.

However, did she go any step beyond the periphery of traditional Congress-defined secularism? What did her government do to help the Muslims, reeling under the juggernaut of abject poverty, semi-pauperisation, illiteracy, lack of healthcare and even lack of proper drinking water in the state that is lurching due to an immense economic crisis caused to it by systematic discrimination by the New Delhi-based ruling classes?

When Mamata Banerjee seized victory in West Bengal, riding the anti-incumbency wave against the opportunist and social-fascist parliamentary Left Front that ruled the state for 34 years, following the massive people’s struggle against land acquisition in Singur and Nandigram and the movement of the Muslims against the discriminatory policies of the government, which was evident from the Sachar Committee Report, it was perceived that she will usher the state and its minority community, Dalits and tribals to a new dawn of progress and prosperity.

It didn’t take long to shatter that utopian dream, when the Muslims found that by ignoring their plight and the issues they face in real life, like poverty, unemployment, agrarian crisis, illiteracy, lack of healthcare, lack of proper hygienic living condition, lack of government support, etc., Mamata Banerjee and her sycophants were busy in appeasing the reactionary Muslim clergy, by promising them a fixed monthly allowance, holding of Islamic Jalsas, religious programmes and promotion of the Urdu language, which 90 per cent of the Bengali Muslims do not understand.

For the progressive and democratic Muslims, it became evident that the “secularism” of Mamata Banerjee is sham, it’s more about promising the Muslims a great “afterlife” than making things better in this world. Mamata Banerjee’s unapologetic Muslim appeasement is actually appeasement of the powerful Muslim clergy, the defacto local kingmakers in the Muslim-majority regions, to ensure that the clergy can indoctrinate the youth, women and children through radicalisation programmes so that they remain immune from left-wing, progressive and democratic ideals, which agitated the Muslims of both sides of Bengal against the prevalent feudalism, comprador capitalism and foreign imperialism for a long time.

The overt communal appeasement and the state’s reluctance to act against the communal politics done by the reactionary Muslim clergy helped the BJP to rise in the state with the help of the RSS and various other members of the Hindutva camp, like the Hindu Samhati. The RSS-led saffron camp started penetrating deep inside the Namasudra Bengali colonies (Dalit colonies) and exploited the anti-Muslim sentiment prevalent among the refugees from Bangladesh, who either faced the wrath of Muslim fundamentalists during partition or in recent days. The Hindutva fascists fanned the inherent Islamophobia to build up a huge army of Hindutva mercenaries, including the mass murderers like Lakshman Sheth into their fold.

Since 2011, numerous communal riots were ignited throughout the state and unlike the 1980s and 1990s, when the majority of the Hindu upper-caste Bhadralok community condemned communal politics despite loathing the Muslim community, the Bhadralok community is now shedding the mask of its “Bhadrata” or “politeness” to expose their grotesque self. Now they openly and very unapologetically support the lynching of Muslims, even if they are Bengali-speaking Muslims killed by non-Bengali upper-caste Hindus. Mohammad Afrazul Shaikh being the recent example, whose death didn’t bring many Hindu upper-caste Bengalis on the streets, rather made a lot of urban, elite and upper-caste Hindus grin on the tragedy.

So, when Mamata Banerjee and her party found this discontented and unapologetically Hindu voter base of the BJP growing, it started replicating the model of the BJP to woo the Hindu voters, especially the upper-caste Bhadralok Bengali and Namasudra communities by bagging their leading figures. After completely occupying the Matua Sangha, the community organisation of the Matua community, one of the dominant Namasudra group, Mamata Banerjee allowed her members to participate and then hijack Hindutva rallies and programmes that the VHP and the Bajrang Dal organised in parts of North and South 24 Parganas, Nadia, Hooghly, East Midnapore, and Howrah district.

The organisation of Ram Navami rally by the BJP, an unprecedented event in a Shakta Hindu dominated West Bengal, and the Trinamool Congress’ meek opposition to it, intensified communal tension throughout the state and to tap the mood of the Hindu community, overwhelmed by the communal rhetorics of Narendra Modi, Amit Shah, Dilip Ghosh and Tapan Ghosh, Mamata Banerjee ordered the celebration of Hanuman Jayanti, another non-Bengali, Vaishnava Hindu festival with full fanfare throughout the state.

After multiple stints to woo the Hindu voters through her version of Hindutva, Mamata Banerjee finally gave nod to a large-scale Brahmin Hindu Priest Convention in Bolpur, organised by her henchman and the local tyrant Anubrata Mondal, a man who is alleged by the poor people and the opposition of killing and maiming numerous people to consolidate the domination of the ruling party in the region. The terror spread by Anubrata Mondal is one of the major reasons that the BJP could build up a huge organisation in the Muslim-majority Birbhum district, by including, surprisingly, a large number of Muslims in its ranks.

Infamous as Keshto, Anubrata Mondal spoke as the official of the Trinamool Congress in the aforementioned convention, signifying the importance of the Hindu priests in the Hindu society for the betterment of it and thereby confirmed that the state government is a firm defender of the heinous and reactionary caste system that brutally segregates the Hindu society on the basis of birth and reserves the right of priesthood only for those who are born to the highest strata – Brahmins.

Even before the hullabaloo over the Brahmin Convention was over, the participation of a Brahmin minister of Mamata Banerjee’s cabinet, Irrigation Minister Rajib Banerjee, as an official representative of the Trinamool Congress government in a convention called by the Sanatana Brahmin Trust, a pro-Hindutva and hardcore casteist fascist organisation, where demands for the Brahmin community were raised, exposed, once more, the real Brahminical fascist character of the Trinamool Congress government and its supremo.

What are the things the Sanatana Brahmin Trust is asking for? What demands did they make during their convention in Dakshineswar, a pilgrimage spot for the Bengali Hindus? It’s not surprising that the Sanatana Brahmin Trust didn’t demand anything that can be remotely tagged as progressive but handed over a list of utmost reactionary demands to Rajib Banerjee and Gopal Saha, the Chairman of the Kamarhati Municipality.

The leader of the Sanatana Brahmin Trust, Sridhar Mishra told the media that their organisation has placed a list of nine demands, including the following, before the Mamata Banerjee-led government through Rajib Banerjee:

Mamata Banerjee has already allocated three bighas of land to the Sanatana Brahmin Trust in Mecheda, East Midnapore, to build up its infrastructure.

Now, when this government of Mamata Banerjee is so much communally inclined to hijack the Brahminical fascist vote bank by peddling communal hatred along the lines of the RSS, while appeasing the Muslim clerics and fundamentalists on the other hand, it becomes crystal clear that Mamata Banerjee can’t and isn’t thinking about defeating the Hindutva bandwagon led by the Modi regime to protect secularism.

Rather than defeating Hindutva fascism with the ideology of secularism and progress, the Trinamool Congress government is actually using the same mechanism used by the BJP to hoodwink the voters and then divide them along caste and communal lines.

By legitimising the reactionary Manu Smriti-based caste oppression mechanism and by considering the Brahmin community as the top of the social hierarchy in the Hindu society, the Mamata Banerjee-led Trinamool Congress government of West Bengal is endorsing the enslavement of the Namasudra community and their ostracisation as well according to the puritan Brahminical rules. The Mamata Banerjee regime is also making it clear to the tribal people that it wholeheartedly supports their exploitation and oppression at the hands of the Bengali upper-caste elites.

Hindutva ideology, like any other fascist ideologies, is strongly based on bigotry and racism. Brahminical hegemony over the backward castes and the ostracisation of the Dalits, tribals and minority communities is strongly imbibed in its nefarious doctrine and any attempt to appease a constituency on the basis of Hindutva or by promoting Brahminical hegemony will mean succumbing to the fascist ideology.

Despite her rhetoric on secularism and lambasting of Modi’s Hindutva jingoism and bigotry, Mamata Banerjee has failed to prove that she has actually snapped her ties with the communal fascist powers, with whom she was partners when Narendra Modi was overseeing the genocide of Muslims during the 2002 Gujarat pogrom. She has either supported and appeased the reactionary Salafi Muslim fundamentalists and clergy or she has approached the arch-reactionary Hindutva elements with the desire to seek assistance and support. Through her such actions, she has shown that rather than uniting the Bengali society, she is working, indirectly for the RSS and the Modi regime, to divide and create antagonistic contradictions on communal lines in the state.

To restore the glory of Bengal as an oasis of communal harmony and to truly build up an iron-strong communal unity of the people, a massive anti-communal and anti-fascist unity of the poor, the workers, the landless and poor peasants, the toiled masses and the common urban people must be constructed with diligence and perseverance from today onwards. Mamata Banerjee and the Hindutva scums will not get an inch of political land in the terrain of Bengal if the people can be aroused and united with a strong democratic fervour. This is guaranteed by history and its progressive and revolutionary course.