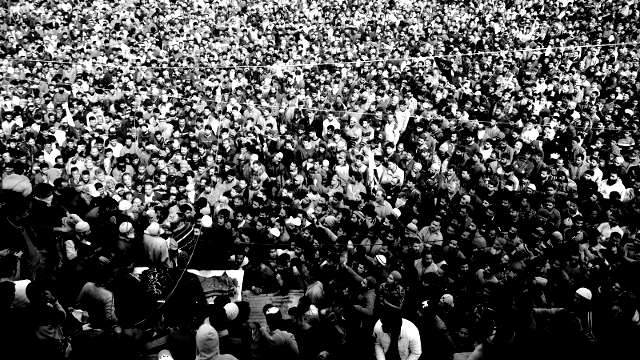 When the TV channels were busy debating how Sunanda Pushkar died to avoid mentioning a large number of farmers agitating in Mumbai for their demands, Kashmir saw another tearful farewell given to those militants who were killed by the government forces in Hakura village of Anantnag district. The militants who were killed in an alleged “encounter” are identified as Eesa Fazili, a resident of Soura area of Srinagar district, Syed Owais of Guhnoo of Kokernag area Anantnag, and an alleged Pakistani militant, named as Sabzaar Ahmad. Eesa Fazili and Syed Owais were engineering students who joined the militancy last year after being infuriated by the atrocities committed by the Indian forces while suppressing the rebellion that flared up throughout the valley following the killing of Burhan Wani in 2016.

The corporate-controlled mainstream media of India, following its ancient self-censor policy, merely mentioned the killing of three militants in Anantnag, by crediting the Indian forces for gunning down “terrorists”. The media remained absolutely indifferent towards the public sentiment, visible throughout the valley, which manifested a resolution to fight against the Indian occupation and expressed anguish over the death of the three militants. Except for the Kashmiri media, no mainstream media house of India dared to show the sight of protests and the massive gatherings during the funeral ceremony of these two militants. Like any other incidents of gross violation of human rights, the media swept the incident of people’s resentment against the atrocities below the carpet.

While Indian audience were watching conspiracy theories on Kim Jong-un in Hindi news channels, such incidents and facts that even the DPRK leader is unaware of, a complete shutdown was observed in the entire Anantnag town and in the adjacent areas to mourn for the militants who died. A panicked government responded by suspending the mobile internet services in Anantnag as incidents of stone pelting were reported from several areas of the district in the morning. Intense clashes between the Indian forces and the local Kashmiri youth went on throughout the entire day in different parts of Kokernag area. At least 15 youth are reported to have sustained pellet injuries and were treated at the Sub District hospital of Kokernag. The police reportedly lobbed tear gas shells to disperse protesting youth in Anantnag town.

After the police officials informed Fazili’s family about his death in the encounter at Hakoora, strict restrictions were imposed in Srinagar to prevent people from going to Soura, where his funeral was to be held. The media in Kashmir reported that large contingents of police, CRPF were deployed to prevent the formation of any procession, while concertina wires, barricades, and armed sentries were used to prevent public movement towards Soura.

Clashes were reported from many areas of Anantnag town during which police lobbed several tear gas shells to disperse the protesting youth. There was a complete blackout on the national media coverage and the police only said that it’s doing all these to “maintain law and order”, a cliché used by the forces of the government whenever they have to violate human rights and civil liberty in the Kashmir valley. Actually, the Indian government still shows the mass rebellion in Kashmir against its misrule and wrongful occupation as a “law and order problem” in one of its territories to the world to ensure Kashmir remains out of the purview of United Nations’ criteria of conflict zones and hence, human rights violation and forceful subjugation of the people through military might becomes easy.

Still, the preparations and prevention mechanism of the Indian bureaucracy, trained by the British and American imperialist forces and their Zionist Israeli puppets, didn’t bring much success for the rulers, as the defiant Kashmiri people observed a total shutdown in Srinagar, the commercial hub Lal Chowk had a deserted look and public transport stopped plying on the streets. In Ahmad Nagar, the local youth attacked an SSB camp with stones, while the forces used stun gun, pellet guns and smoke grenades to disperse the protesters.

Hurriyat (G) Chairman Syed Ali Geelani paid his respect to the young militants and said: “Indian insensitivity is the sole reason for this unabated bloodshed”.

“These youths spilled their hot blood for the great and sacred cause of Kashmir and the entire nation of Kashmir is indebted to them for their ultimate sacrifice. It is the collective responsibility of the people of Kashmir and the leadership to take the ongoing movement to its ultimate realization,” the Rising Kashmir quoted him saying. The remains of Fazili was brought to Soura for his last rites at 8:00 am and thousands of people braved the morning cold to gather for his Janaza (funeral). The crowd swelled until 3:00 pm to a sea of mourners when finally he was buried in a local graveyard. The people, who didn’t mind the Indian media’s blackout, shouted anti-occupation and pro-freedom slogans with pledges to carry forward the freedom struggle of Kashmir.

Mobile internet service was stopped in Srinagar afterwards, to prevent people from sharing the photographs and videos of Fazili’s funeral. However, the pictures and the videos still sneaked out to the world to show the resolution of the Kashmiri people towards their cause of freedom and their love for the youth, who falls to the bullets of the Indian state. It’s true that the youth had chosen militancy as their way of protesting the Indian occupation and they were misguided into believing that militancy will resolve the problem of Kashmir, however, at the end of the day, each Kashmiri have two choices left in the present day, to be a militant and get killed by the Indian forces or to not be a militant and then get killed by the Indian forces. What should they choose? Which one is the most glorifying among these two? It’s the sheer apathy of the Indian establishment towards the plight of the Kashmiri people that the blood is flowing on the streets.

If the corporate-controlled mainstream Indian media thinks that it can blow the horn of chauvinism and jingoism with a high pitch to conceal the pain, the grief and the anger of the people of Kashmir, then it’s still living the life of an ostrich with head immersed in the sand dunes. The people of Kashmir are indeed despising the Indian media as much they despise any media that doesn’t portray their just struggle in the correct way. The adulteration, the dilution and vulgarisation of the Kashmir movement by the Indian mainstream media is an example of how the press owned by the big corporations can torment truth and fabricate lies for the sake of an establishment.

The incidents like the funerals of Eesa Fazili and Syed Owais are now regular affairs in Kashmir. Being emotional people, the Kashmiris will weep and mourn the dead as they feel a sense of belongingness with the dead, despite sharing ideological or tactical difference with them over the path to achieve freedom from occupation. The support and respect that the people of the Kashmir valley showed for the three militants and the overwhelming crowd that gathered at their funeral showed how the Kashmiri people are seeking small scopes to unite and form a strong force for the Indian establishment to reckon with. It’s very evident that the self-certified “nationalist” and “patriotic” Brahminical channels will never show that unity because that unity is where the strength of the Kashmiri society lies.