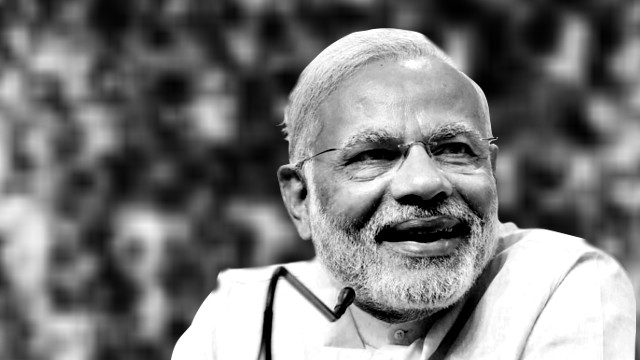 While Prime Minister Narendra Modi is having utmost difficulty to chest thump on his purported “masterstrokes” like demonetisation, GST implementation, recovery of black money, employment generation through Pakoda frying and a host of such propaganda, which he and his coterie of Hindutva fascist thugs had earlier used to bamboozle his gullible supporters and stun some of his ardent critics as well, during the campaign for 2019 Lok Sabha election, and resorting to jingoism, Hindutva hate mongering and the Sangh Parivar’s usual communal rantings over Kashmir, Ram Mandir, etc, to seduce the upper-caste Hindu elites and middle class voters, the BJP’s core voter base, there are a lot of things that are going unsaid during this crucial campaigning phase which may show the country what a unique system the BJP has implemented in the last five years of the most cacophonous government India has ever seen.

This unique system is the rule of the non-existent. Those who didn’t exist suddenly started ruling. Those who are non-existent in reality started captivating the imagination of the gullible middle class. No, this isn’t about the online troll army roosted by the BJP’s notorious IT Cell, it’s about a series of entities, programmes, schemes and claims that have been reigning over India since 2014, without any real existence.

Everyone is aware of the Rafale Jet scam’s depth and volume, which of course make it the “mother of all scams”. The fact that both Modi and the head of the Reliance Defence, Anil Ambani, showed the audacity to negotiate a deal that has national security implications with the French government and the French aviation company — Dassault Aviation — to dump a reputed public sector company like Hindustan Aeronautics Ltd (HAL) and replace it with a company like Reliance Defence Ltd, shows how concerned Modi and his cohorts are about India’s security.

The replacement of the service provider wasn’t merely about favouring a crony-comprador capitalist whose companies donate liberally to the BJP’s coffer. The problem actually is how a prime minister could personally lobby for a big crony-comprador capitalist whose firm neither existed in reality nor owned any land or infrastructure required to become a contender for the deal, in a foreign country? How could the prime minister help the French choose a partner like Ambani’s firm over the reputed HAL knowing well that the company itself registered a few weeks before their France tour?

How could a company become eligible for maintenance of military aircraft even without an iota of experience in aviation-related business in the past and even without the required formal setup and infrastructure in place?

Neither Modi nor his loud-mouthed sycophants will give any concrete answer to this question. No one will be explaining what made the BJP allow the prime minister to take this step when the reality was always before his eyes.

When the JIO University was felicitated as an “Institution of Eminence” by the HRD ministry in 2018, it created a ruckus as the opposition and the common people mocked the government for favouring the Reliance Industries led by Mukesh Ambani. The “Institution of Eminence” is a status to reach which hitherto all institutions had to struggle hard, however, Modi’s generosity towards Reliance, or his act of expressing loyalty towards his master, proves that in an era when higher education is commercialised on a large scale, anyone with a sackful of money can not only own an institution of higher education to reap profit but also get ornamented with the accolades like Reliance’s JIO University, without even having a bare minimum campus.

What made the Modi regime bestow a prestigious title of “Institution of Eminence” to JIO University even before its campus came into existence? Why a non-existing university, without a campus, students, processes or practices gain a certification for which many others have to struggle for years? What’s the point of this new grade for higher educational institutions, if a non-existent JIO University can become equal to IITs, IIMs, and other reputed institutions even without existence in real?

The Modi regime’s shameless advocacy for JIO University, which is given a status of a “greenfield” university to help it acquire land at a throwaway price without many complications, proves that in the coming years, the future of thousands of students will be jeopardised by allowing such cronyism in the field of education, which is supposed to be a resource creator for the country. After all, it’s Modi’s attempt to make the Reliance groups of both Ambanis the omnipotent rulers of India through a 360° control over the lives, opinion and behaviour of the people.

The high degree of non-existence

The end of this tyranny of non-existence isn’t near. Take the example of Smriti Irani, who had held a portfolio like the Union HRD Ministry, using falsehood in her election affidavits of 2004 and 2014 over her highest educational qualification. Her sheer and unblinking lie, supplemented by her claim that she holds a degree from Yale University, is exposed during her recent election affidavit filing, where she mentioned herself as a non-graduate. She didn’t apologise or clarify regarding her 2014 election affidavit of being a graduate. Rather, quite adamantly she and her party brushed aside the goof up and resorted to rhetoric to avoid any ignominy.

Playing the card of “humble background” to woo voters, she tried to downplay a criminal offence — filing false claims to misguide the people — which would’ve landed someone from the opposition in jail. Mrs Irani didn’t gain this impunity spontaneously, rather the courage to lie and deceive the people, to fiddle with the system was imbibed in her by the BJP and its prime ministerial candidate Modi himself.

After acknowledging in a television interview during his tenure as the Gujarat chief minister that he studied up to standard XII, Modi became a postgraduate from Delhi University in “entire political science” suddenly in 2014. Though the university and its School of Open Learning declined to provide any evidence over the prime minister’s educational qualification, the BJP lambasted the opposition for questioning his credentials that are mired in controversies and are of dubious character.

It’s not mandatory for a prime minister or any other such constitutional position-holder to have an impeccable educational background or carry an eloquently-versed vocabulary. They are public servants and are meant to show correct political leadership in facing challenges and achieving goals. There’s no requirement of an erudite character with an impressive educational track record at the prime minister’s office, rather an honest, straightforward, visionary and able personality is preferred for the position. The same goes with other cabinet berths.

If Modi has been promoting himself as a visionary leader with an ability to take tough decisions, then why he and his cabinet colleague have to lie before the country over something like an educational degree? The compulsion comes from the “wannabe” character of the BJP leaders, who, despite lacking any human qualities and bred in crassness of Hindutva fascism, suffer from extreme inferiority complex comparing themselves with the stalwarts of other political outfits of the centre and the left.

Trained only in rabble-rousing, inciting communal riots by spewing venom, organising mob violence and gang-raping women of Muslim and Christian community, the Hindutva thugs have no other qualities that can make them compete as the best lackeys of the ruling classes. Due to their pro-corporate outlook and indulgence in extreme corporate appeasement, they try to promote themselves as highly sophisticated, erudite and pro-business individuals and that compels these Sanghis to wear an educated look to be in the league. Missing which, Modi and his coterie wouldn’t mind faking it. Even if Irani and Modi’s lies are caught, exposed and publicised, still it will not hurt them politically as they will twist it by playing the victim card easily, shedding crocodile tears and accusing the opposition of attacking them for their “humble” origins.

This series of the rule of non-existent factors will keep dragging India into the abyss of sheer darkness, crisis and chaos in the days to come, as Modi and the BJP are all set to sweep victory in the Lok Sabha election using the most dangerous tricks that no other ruling party could employ until now. During Modi’s second term, followed by the establishment of the Hindu Rashtra the reign of the non-existent, the omnipotence of cronyism and comprador capitalism will increase manifold. A bamboozled and utmost disarrayed opposition will not be able to take any concrete step to undo the damages perpetrated by the Hindutva fascists, providing leverage to the BJP-RSS camp to continue with their unapologetic promotion of cronyism. India, not only needs an end to Modi’s tyranny to save itself from such blatant thuggery by a gang that has no shame in concealing their utmost heinous agenda, but it also needs a total purging of the toxic filth that this regime has filled its public mindscape with so that a better tomorrow can be created.