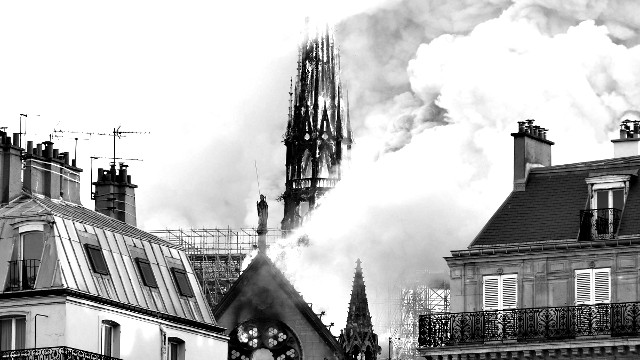 Sure it is pretty. I guess, depending on how you define that, which is the goal of the philosophy of aesthetics. Let this be the time of rebuilding the ancient ruins. Yes, it’s a pretty church and it still stands for something. I’m supposed to be concerned, sad and praise the billionaire who is going to spend the money to fix it… heck, the world is so unequal that literally, 50,000 children die every day mostly because they can’t afford 50 cents worth of nutrition or mosquito nets, and since I can’t do much about that I try not to let that bum me out too much.

Logic and rationality could probably solve that problem but it ain’t gonna happen in a world where 98% of the world believe in fables written to explain the natural world’s phenomenon that people didn’t understand 3000 years ago, or to convince working people to obey powerful people who didn’t work but appropriated their labour.

I’m sad for the loss of this building; pious peasants and artisans built it with their blood, sweat and tears. But the loss of the faith which built this beautiful cathedral is a million times more tragic. The words of the Gospel are more real than the stones – the Gospel assembled the rocks – the rocks did not assemble the Gospel. Notre Dame was built during the end of the darkest ages of European Catholicism when people accused of sorcery were forced by the church to pull stones out of pots boiling water to prove their innocence, or put in dungeons for years until they confessed to crimes they were accused of by unnamed people. Notre Dame amazed the (purposefully) uneducated serfs and proved to them that the Catholic and royal hierarchies were to be obeyed. Serfs were not permitted to leave the plots of land they tilled for their owners. Basically, they became slaves, bonded to the landed aristocracy. They were killed or punished with torture if they tried to leave. It’s beloved because it’s pretty!

Several of the great cathedrals fell during the original attempts to construct them. The “rib vault” ceilings were strong but pushed the walls outward, causing the walls to topple and the roofs to fall. If you were below them, then any incident will result in a severe cry and a large number of victims won’t blame anyone but call it “will of God.” This led to the development of the “flying buttress“, what one might call a half “fix” that pushed the walls back towards the interiors. Many church roofs were made of lead, which was quite valuable.

Henry VIII stripped all the Catholic churches in England of their roofs and any other things that were valuable during his take over of the church. It financed his genocide and his own propaganda Anglican churches. Protestants in England were totally against the stained glass, fancy golden crap and the mysticism of the Catholic church. The state Anglican church, created by the mass murdering King Henry VIII settled on fancy churches but more protestant services.

Someone will be blamed. Actually, many of them will be. Muslim arsonists? Neglectful French state? Incompetent diocese? The blaming process will be a civilisational game of rugby. The hearts of many will be revealed. I would not call this terrorism. Some will no doubt fit climate change into the narrative, therefore, leading to Trump’s policy being accused as the cause. Some said it might have been caused by a restoration project. That reminded me that the Venice Opera House also burned down in 1996 due to a restoration project. An excellent story, The City of Falling Angels by John Berendt narrates the situation in Venice. It will be rebuilt. Cathedrals like this are reflections of society. Building it took nearly 200 years. Rebuilding might take less. And who knows what modern technology, materials and architecture might end up there…

Notre Dame is Europe – Europe in microcosm. European Christianity has been burning down for decades, and it is now down to the embers. Today, the old Queen is the supreme governor of the Anglican and Episcopal churches; she is supposedly ordained by God, which how many people can delude themselves into believing in the 21st century is beyond me, the only explanation that makes sense is genetics. Flying buttresses below.

I guess I’m a negative person, what I see as crazy others see as pretty. If I was religious I’d probably be more like an Amish religious person. They don’t seem to spend a lot on big buildings. They build barns or help their neighbours build homes. But I’m not religious, I’m philosophical, which means I have no beliefs, just suspicions, based on science and history. And I worry about keeping myself alive and housed.