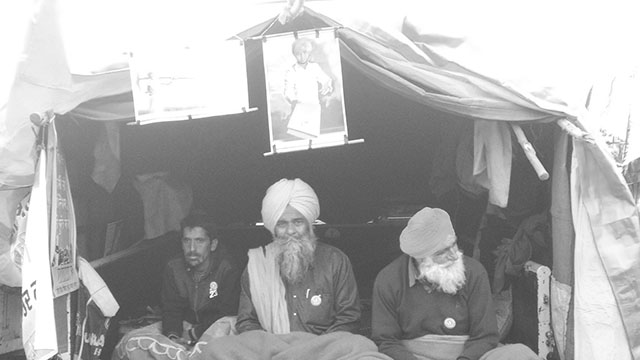 The Samyukt Kisan Morcha (SKM)—an umbrella body of 32 farmers’ organisations—postponed its march to the Indian Parliament demanding the repealing of three contentious farm laws and a legal guarantee of a minimum support price (MSP) for crops. The proposed march was supposed to take place in May. What compelled the SKM to postpone the farmers’ march to the Indian Parliament in Delhi?

According to the farmer leaders from various factions of the Bharatiya Kisan Union (BKU) and other constituents of the SKM, Prime Minister Narendra Modi’s regime has grown desperate to evict the farmers from the protest sites at Delhi’s borders–Ghazipur, Singhu and Tikri. The SKM is fearing that the Modi regime will use the farmers’ march to the Indian Parliament as an excuse to unleash state terror and pulverise their movement.

It has been five months that the farmers, mostly from Haryana, Punjab and Uttar Pradesh, are demonstrating at Delhi’s borders against Modi’s contentious farm reform laws that exclusively serve the interests of corporates that fund the ruling Bharatiya Janata Party (BJP) and its parent body Rashtriya Swayamsevak Sangh (RSS). Out of sheer hubris, the Modi regime has been rejecting the core demands of the farmers regarding the repealing of these three contentious laws and a legal guarantee of MSP for crops.

Rather than paying heed to the farmers’ cause, the Modi regime, the RSS-led Hindutva universe and their servile press have been vilifying the farmers, accusing them of being separatists, terrorists and, also, super-spreaders of the COVID-19 pandemic. The Modi regime is even contemplating an operation to forcefully evict the protesting farmers from Delhi’s borders.

Stating the reason for the SKM postponing the farmers’ march to the Indian Parliament, BKU (Ekta Ugrahan) leader Joginder Ugrahan said: “Modi government is trying to find some excuse to launch an oppressive assault on the protests going on at Delhi borders. This excuse may be of Corona (COVID-19) pandemic or it can be created by giving violent colouring to our actions. Modi government, as a champion in executing anti-people schemes, can create a violent and clashing situation by infiltrating its agents in the farmers’ struggle and it can launch a counter-attack on the farmer’s protest. Due to this reason, the leadership is restraining taking those steps in which the forces who play in the hands of Modi government can easily infiltrate and provide an opportunity to the government to use this chance to achieve its fascist aims.”

After the SKM declared in March that it will organise a farmers’ march to the Indian Parliament, security and intelligence agencies have been forcing the farmer leaders to divulge the details, including the date and planned route. The farmers had faced brutal state assault on January 26th 2021 when they organised a tractor rally in Delhi. The SKM is fearing that the BJP will use brutal force to disperse the proposed farmers’ march to the Indian Parliament and then use the COVID-19 pandemic as a subterfuge to evict them from Delhi’s borders.

According to Rashpal Singh, from Kirti Kisan Union of Punjab, “we are here since last five months, we have not used masks, yet no one suffered due to Corona (COVID-19). The farmers are not spreading Corona, but the government, in the name of Corona, wants to evict the movement. It wants to send home the farmers, this is the ‘Operation Clean’, nothing else.”

On asking whether all constituents of the SKM are determined to continue their protest at Delhi’s borders, Singh said “… we won’t move from here. We will go only after getting these laws as we have no alternatives left.” He informed that the farmers are preparing to face the strong heat of Delhi and setting up more tent. He said, “the farmers are sitting with full confidence; they won’t move”. He stressed that the farmers want to keep the movement “non-political” to ensure no parliamentary party utilises the movement.

The SKM’s decision to postpone the farmers’ march to the Indian Parliament seems to be a pragmatic step as the Modi regime, in its futile attempt to distract the people’s attention from the unprecedented health crisis that has unfolded due to the crumbling of the public health system after the second wave of COVID-19 hit India, will launch attacks, of various magnitudes on the farmers’ movement. However, as the BJP and the RSS will continue conspiring against the farmers, they have to up the ante against the Modi regime, while strengthening unity and raising their vigil.