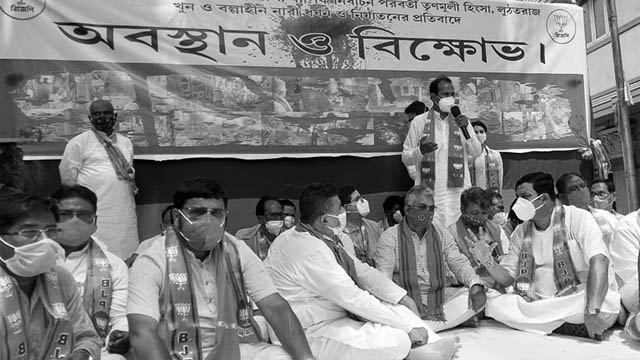 After suffering a humiliating defeat in the 2021 West Bengal Assembly elections, Prime Minister Narendra Modi’s Bharatiya Janata Party (BJP) is refusing to come to terms with reality. Facing an ignominious snubbing, the BJP is using optics of sporadic incidents of post-poll violence in West Bengal—the quintessential appendage of the state’s parliamentary political practice since the 1970s—to attack Chief Minister Mamata Bandopadhyay as well as to distract public attention from the Modi regime’s colossal failure in curbing the COVID-19 second wave.

The BJP is raising a communal bogey by claiming that the “Hindus are under attack” in West Bengal. Through this narrative, Bandopadhyay’s Trinamool Congress (TMC) is subtly referred to as a Muslim party and the post-poll violence in West Bengal as communal clashes. Online armies deployed by the BJP’s dreaded IT Cell have been spinning this narrative and it’s captivating not just hardcore Hindutva fanatics but even a section of the liberal democrats and the parliamentary left. Bandopadhyay, whose TMC’s victory was hailed on May 2nd by the liberal critics of Mr Modi, is suddenly been accused of intolerance by them.

Despite the TMC’s counter-propaganda, the alternative and new-age media houses and fact-checkers like AltNews busting the fake news of communal violence, the Kolkata Police and the West Bengal Police didn’t take stern action against the perpetrators, except arresting two who are sent to 14-day-long judicial custody. None of the BJP leaders, who have used fake videos of violence from Bangladesh, Odisha, Uttar Pradesh, etc, to blame West Bengal’s Muslims and the state government, are quizzed by the state police or the Kolkata Police for their heinous role. There are no mass police complaints against such campaigns.

Though the TMC and its leaders have vociferously countered the fake news peddling and allegations of partisan violence labelled by the BJP and its parental body Rashtriya Swayamsevak Sangh (RSS)—the world’s largest non-state, fascist paramilitary force—on social media, Bandopadhyay didn’t take any administrative steps to curb the menace and allowed the Hindutva camp to instigate the susceptible Hindu minds in the state unabashedly. This is going to brew the communal tension beneath the surface for a long time to come in West Bengal.

One of the reasons behind Bandopadhyay’s reluctance to take any action against the BJP’s fake news factory is the TMC’s compulsion to use the saffron camp’s presence to scare the Muslim community. The Muslims, who are left optionless in West Bengal due to Bandopadhyay’s cunning manoeuvring, can be compelled to vote for the TMC only until the BJP exists as an imminent threat and, therefore, the political discourse of the state will remain bipartisan for a long time to come. To have her votebank intact, Bandopadhyay needs the BJP-RSS more than ever now.

Modi knows well that only communal pogroms, xenophobia or hyper-jingoism over a border clash with either China or Pakistan can save his hegemony. Modi’s utmost failure in curbing the COVID-19 pandemic, his complicity in spreading the virus through massive election rallies in West Bengal and allowing the Kumbh Mela at Haridwar, and the collapse of the public healthcare system under his watch due to sheer unpreparedness, despite having a year’s buffer time to augment its infrastructure to cope with challenges, dented his image and the defeat of the BJP in the assembly polls of Kerala, Tamil Nadu and West Bengal breached the halo of invincibility built around Modi’s brand.

In such a situation, it’s imperative for Modi to use post-poll violence in West Bengal to restore his hegemony and mobilise his hyper-fanatic stormtroopers and the RSS men under his authority to ensure the BJP can pulverise all parliamentary opposition. The optics of post-poll violence in West Bengal may help the BJP and Modi to distract the people’s attention from the COVID-19 crisis, falling economy and rising prices. But the question is, can this narrative and cacophony against the TMC help the BJP in the long run, or whether the regime will lose its steam early? Only time will tell us.