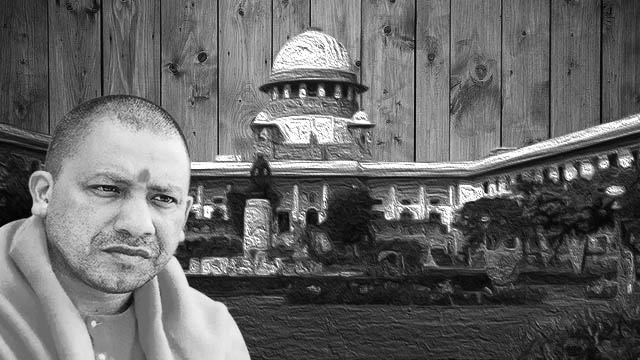 Finally, Uttar Pradesh Chief Minister Yogi Adityanath called off the Kanwar Yatra, a Hindu pilgrimage ritual, after the Supreme Court took suo motu cognisance of his decision to allow it. The apex court’s bench of Justices RF Nariman and BR Gavai issued a notice on Wednesday, July 14th 2021 to the Bharatiya Janata Party (BJP)-led state government along with the Union government and neighbouring Uttarakhand. Uttar Pradesh government has told the press that it’s going ahead with a pared-down “symbolic” version of the ritual in the province that is still, technically, inside a union that calls itself “secular” and separates the state and the church.

The Kanwar Yatra is a north Indian Hindu ritual during which men travel on foot to the river Ganges and collect its water and take it back to their neighbourhood temple of Lord Shiva, a Hindu deity. This annual ritual is observed in the monsoons and hundreds of thousands of north Indian Hindus of Delhi, Haryana, Uttarakhand and Uttar Pradesh take part in it. A lot of road accidents and incidents of violence involving the pilgrims take place every year during this period of the journey.

As Yogi’s BJP government is desperate to win the 2022 Uttar Pradesh Assembly elections, therefore, allowing the Kanwar Yatra or at least pretending to support it, even in the face of legal hurdles, has been important for it to ensure that the Hindutva-incensed vote bank remains titillated. This is a reason that the Uttar Pradesh government paid no heed to the Supreme Court’s observations at the beginning.

The Rashtriya Swayamsevak Sangh (RSS)-led Hindutva fascist organisations started using the Kanwar Yatra to mobilise the ostracised Dalits and lower-caste Hindus. These communities are used by the RSS as pawns against Muslims during communal violence. Moreover, by mixing toxic patriarchal-feudal nationalism with religion, the RSS incites participants from these communities to indulge in violence, vandalism and create a ruckus with impunity during the Kanwar Yatra.

During the second wave of the COVID-19 pandemic, grotesque visuals from Uttar Pradesh stunned India and the world. Apart from the visuals of long queues for oxygen and hospital beds, people dying gasping for oxygen on the streets, the sight of hundreds of corpses floating in the river Ganges throughout the state and hundreds of corpses buried at the banks of the river will continue to haunt the conscience of sensible people for years.

Despite this catastrophe, the BJP showed the audacity to hide the real casualties of the COVID-19 second wave. Using PR stunts, the Yogi regime started claiming that the state has fought the pandemic well and prevented deaths, concealing the real figures of death. Even though the BJP faced immense infighting over the leadership of Yogi, Prime Minister Narendra Modi, Union Home Minister Amit Shah and other top BJP and RSS leaders stood by the chief minister.

Modi, who is also a member of the Parliament from Varanasi in Uttar Pradesh, openly supported Yogi’s bid to power in the next round as well. His government didn’t dare to intervene in Yogi’s decision to allow the Kanwar Yatra as the rabble-rouser monk-turned-administrator holds the key to the BJP’s re-election to power in 2024.

But the case has not been the same everywhere. In Uttarakhand, former chief minister Tirath Singh Rawat was removed after he decided to continue with the world’s largest Hindu congregation—the Mahakumbh at Haridwar— in March and April 2021, attracting global criticism as the event became a super spreader of the second wave. Though Modi himself endorsed Rawat’s Mahakumbh decision at the beginning to exploit Hindu religious sentiments, when the event turned into the catalyst of a catastrophe and boomeranged, he and Shah made Rawat the scapegoat.

Learning from this, the newly-appointed chief minister, Pushkar Singh Dhami cancelled Kanwar Yatra in Uttarakhand much before the Supreme Court went after Yogi’s regime. On July 13th 2021, criticising Yogi without naming him, Dhami told the press: “We decided to cancel the yatra, according topmost priority to human life… A lot of discussions were held on the issue over the last few days. Our officials held talks with neighbouring states. The outcome of this exercise is that in view of the pandemic and with a new variant being detected in the state, we do not want Haridwar to be the centre of the pandemic… People’s lives are our priority. We can’t play with that… we won’t take any chances.”

Contrary to the BJP-ruled Uttarakhand’s position, Yogi’s Uttar Pradesh remained obstinate till the end to allow the Kanwar Yatra, ignoring the health risk. The Supreme Court even referred to the prime minister’s discussion with the northeastern states on COVID-19 third wave to desist Yogi. Modi had said, “we cannot compromise even one bit”. Justice Nariman used Modi’s quote while asking Solicitor General Tushar Mehta why Uttar Pradesh is continuing with the Kanwar Yatra when Uttarakhand isn’t?

But the Uttar Pradesh government didn’t budge at the beginning. When the Supreme Court was issuing the notices, Uttar Pradesh Minister for Health and Family Welfare Jai Pratap Singh claimed that the BJP government will fight a legal battle but there is no question of stopping the Kanwar Yatra. He placed the matter of “faith” and “tradition” over the concern for public health.

“We will give a reply when the hearing takes place. We will follow all guidelines and instructions given by the court. At the same time, it is a tradition and takes place every year, and we have allowed it because we strongly believe in our Covid management,” Singh was quoted by The Indian Express when the Supreme Court issued the notice.

Now that they have grown up to the age of 16 in the 10 years, we can consider that the state has approximately 169.85m adults. So, Uttar Pradesh is vaccinating 5.64m people every month. At this rate, it will take 30 months to vaccinate each adult in the state. However, rather than finding a solution to the inoculation shortfall, the BJP government was keen to organise the Kanwar Yatra to ensure that it manages to polarise the lower-caste and Dalit voters under its banner.

On one hand, the Party will now be able to brag that the Kanwar Yatra was not allowed to prevent the COVID-19 third wave and will target the celebration of Eid ul-Zoha by Muslims on July 21st 2021 to vilify the community and spread Islamophobia; on the other, the Yogi regime can blame the Supreme Court’s restriction for not allowing the Kanwar Yatra ensure it doesn’t show a compromising image to the feral Hindutva supporters.

However, there will be no reprieve for the Yogi regime in Uttar Pradesh and the Modi regime at the Union as the COVID-19 third wave, which is imminent according to the World Health Organization and the Indian Medical Association, will again tear up the façade of the hollow “system” that they have set up to hoodwink the people. What’s to be seen is whether the majority of Uttar Pradesh’s polarised Hindus still vote for Yogi in the 2022 elections, after suffering due to the lack of proper healthcare in the state, or they turn their back towards communal politics.