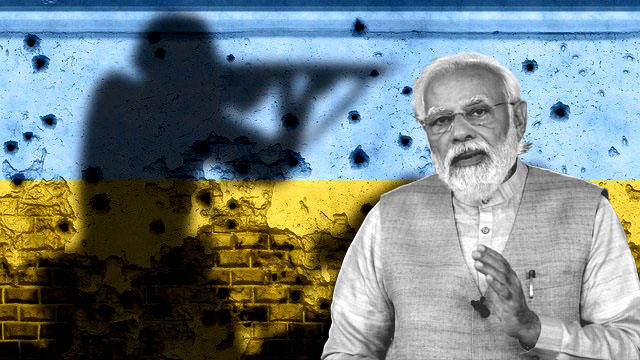 Since the death of an Indian student in the Ukrainian conflict, a major outrage has been experienced in the country as Prime Minister Narendra Modi’s government failed to evacuate the Indian citizens—mostly students of medical education—and pushed them to the brink of a humanitarian catastrophe. To cover up the Modi regime’s Ukraine evacuation failure, the ruling Bharatiya Janata Party’s (BJP) top ministers, leaders and rabble-rousers have now started a cacophony, blaming the students entrapped in Ukraine for their ordeal and criticising them for choosing Ukraine over India to study medicine, following the template set by the prime minister.

This article shows why several Indian students go to offshore locations, like Ukraine, to study medicine instead of pursuing a course in India. The tragic death of a young forensic medicine student in Ukraine was not a result of his reckless pursuit of adventures in a warzone. Rather, he died due to the Modi regime’s Ukraine evacuation failure, which is a result of the sheer indifference of the government and its stalwarts towards the problem. Modi and his coterie are happily campaigning for the BJP in poll-bound Uttar Pradesh but took no step for days to evacuate Indians from Ukraine.

According to the Union government’s affidavit in Kerala High Court, nearly 20,000 Indian nationals were in Ukraine when the Russian military operations against the Ukrainian neo-Nazi regime started. “Out of the estimated 20,000 Indian nationals in Ukraine, 60% (30% reached India and 30% in neighbouring countries) have already crossed the Ukrainian borders and are safe. Government is also taking necessary measures to evacuate the remaining 40% of the Indian nationals by utilising all its means,” the Union government’s affidavit in the Kerala High Court said. It means that nearly 8,000 Indians are still trapped in Ukraine’s conflict zone awaiting evacuation.

What was the option for the Indians, mostly students, living in Ukraine before Russia declared a comprehensive military operation against its neighbour to “demilitarise and de-Nazify” it? The only option they had was to book overpriced tickets to India as the carriers were charging higher fares vis-à-vis normal times citing the probability of a war. As the Modi regime has already privatised the former national carrier Air India, the country was left with no official airlines to carry on the mission of evacuation. Modi regime’s Ukraine evacuation failure can be partially blamed on India’s lack of any nationalised air carrier.

India started the Operation Ganga, a rescue operation to evacuate Indians stranded in war-hit Ukraine only in the last week of February after Russia started its military operations. So far, until Tuesday, March 1st 2022, the Operation Ganga, conducted using private aircrafts, rescued 1,396 Indians in six flights. Citing this, Modi has been blabbering about India’s “rising power” at election rallies in Uttar Pradesh, which, he claimed, helped his government to “evacuate” Indians from Ukraine effectively. But he didn’t tell his fans that despite the Indian Embassy in Ukraine making tall claims, most of the Indians can’t leave conflict-ridden Ukraine.

Soon after Modi criticised the students for going to Ukraine and other countries for pursuing medical studies, the BJP’s propaganda machinery villainised them on social media, holding them responsible for their ordeal for choosing Ukraine as a study destination. However, neither the BJP nor the prime minister clarified why the government took over a month to decide on a plan to effectively evacuate Indian citizens from Ukraine? Why didn’t the government plan an evacuation as soon as the situation worsened in mid-February due to constant provocations from Ukrainian neo-Nazis and their US and western European warmongers? What caused the indecision?

Earlier Modi delegated a few of his novice ministers the role of rescuing the entrapped Indians from Ukraine. These ministers, including Union Civil Aviation Minister Jyotiraditya Scindia, took charge in different neighbouring countries of Ukraine like former Soviet republic Moldova, Poland and Romania. However, for the Indian students, who are running short of cash and electronic funds, it’s difficult to cross the borders and reach these countries as the Ukrainian neo-Nazi soldiers are discriminating against Indians and other people of colour, preventing them from boarding buses and trains to other countries. Most of these students remain stranded in Ukrainian cities.

Finally, to cover up the Modi regime’s Ukraine evacuation failure, the Indian Air Force (IAF) has been ordered to carry out the evacuation under the Operation Ganga. The IAF will reportedly use American C-17 Globemasters to evacuate Indian citizens stranded in Ukraine. However, it’s not clear how can the IAF planes airlift the 8,000 Indians in Ukraine when they can neither enter Ukrainian airspace nor the Indians can cross the borders and reach neighbouring countries. With a capacity to carry 400 passengers, these planes need to fly at least 20 times from the neighbourhood of Ukraine to evacuate stranded Indians.

The Modi regime’s Ukraine evacuation failure has sparked a major discontent within the core urban voter base of the ruling BJP. The anger over the death of an Indian student won’t simmer easily, though it will turn less intense in the days to come. However, for Modi winning the elections in Uttar Pradesh and other states has become the most important task now. Hence, he will try to ensure that these sections can be wooed using his ultra-chauvinist rhetoric or Hindutva fascist hatemongering for the time being, though he can throw the issue to oblivion by creating new optics later.

With a student already dead, can the Modi regime afford to show its indifference and neglect the plight of the Indian nationals trapped in the warzone? Can the Modi regime’s Ukraine evacuation failure be absolved if the BJP wins the elections? To pin hopes on the prime minister for the successful rescue of all Indians will be a gross political mistake. The delay in the evacuations can cause more catastrophe, yet the government remains nonchalant. When the government has mere gimmicks to offer, the Indians trapped in Ukraine must become self-reliant and find out ways to survive and rescue themselves.