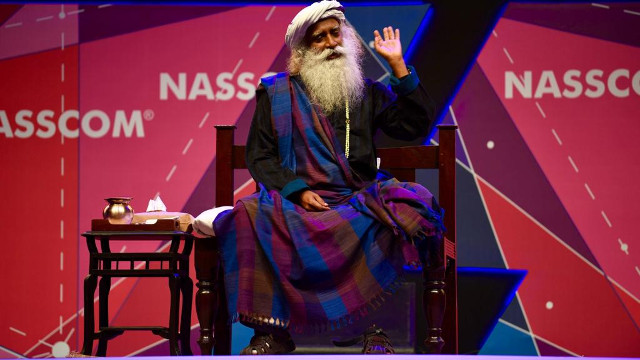 NASSCOM is the leading body of the Indian Information Technology industry and the top capitalists of this industry, which provides employment to a large number of middle-class youth from urban India, are hardcore supporters of Hindutva fascism, as their business thrives on supporting and serving the US imperialism and its global partners-in-crime. It’s the same reason that the IT companies hire the majority of RSS supporters in their ranks and follows a policy of apartheid against the Muslims, Dalits, Tribal people and Christians when it comes to hiring, to ensure a Brahminical hegemony and monopoly exist in the largest industry of the Indian service sector. Therefore, it’s not a wonder to find a dubious godman like Sadhguru, who often preaches extremely unscientific nonsense at highest seminaries of science and technology, to enlighten the NASSCOM and its members by presenting his sheer metaphysical thoughts at World Congress on IT and NASSCOM India Leadership Forum 2018, held at Hyderabad on 19th February.

Why Jaggi, or Sadhguru, is invited at programmes organised by the science and technology community? Why are a godman’s views and sermons necessary for an organisation like NASSCOM that manages things that run on science and technology? Why would IT heads and top managers of the industry, from all over the world, listen to metaphysical jargons and propaganda when they should delve into logic, rational knowledge, fact and data to innovate something new for the development of the economy and the society? Why Sadhguru and not Pope Francis or a Shia or Sunni evangelist? Why the India Inc., which is infamous for its incessant loot and plunder of Indian public money by employing the most notorious forms of cronyism, needs spiritual upliftment through the “Godly” words of billionaire godmen like Sri Sri Ravishankar, Sadhguru or the US puppet Dalai Lama? Why so much of spirituality dear capitalists while you actually give a damn to all things spiritual when it comes to profit?

The answers lie in the fact that the Indian capitalists are extremely comprador in nature, which means, they aren’t able to work independently, especially in the IT sector, without the help of the foreign capital. The foreign capital and technology help these capitalists to mint money by exploiting cheap labour of the Indian IT employees. Due to their inability to develop something new, innovative and path-breaking, the IT industry of India is solely existing on a service-provider model rather than an innovative solution generator model. To exploit the love of the foreign capital for Indian spirituality, which helps the American corporate honchos to shed some of their guilt that the pastors or rabbis are unable to, India Inc., especially the IT Industry, use the tool of spirituality to woo its clients and keep the employees intoxicated with the opium of religion.

However, due to their overt dependence on Brahminical Hindutva fascist ideology and apartheid policy, the Indian IT industry, like most of the other industries operating in the country, finds itself at the blind alley of creativity and innovation. While a lot of Indian men and women work for the largest IT conglomerates on earth like Google, Facebook, Microsoft or Red Hat, while more than 50 per cent of popular software and operating systems have Indian-made codes engraved in them, seldom did they create anything path-breaking themselves, seldom does the Indian IT industry develop any operating system or software on its own that has any real potential to bring ease-of-living to the people. It’s not their lack of ability or knowledge, rather the lack of confidence and the fear of retribution from their American and foreign masters that the Indian IT industry remains a bulwark of reaction and works as a factory for the Western “clients” who bring dollars.

During the World Congress on IT and NASSCOM India Leadership Forum 2018, Sadhguru spoke on “Intelligence of Ignorance” before a bunch of hardcore Hindutva fascist IT heads from India and their white-supremacist clients. The controversial godman said that “ignorance propels inventions” and thus the IT industry must venture out and seek knowledge about things it doesn’t know. It’s an irony, the Sadhguru must know that the reason why he and the clan of godmen and women thrives and grows in India isn’t the deep spirituality brewing within the Hindu society, rather due to the prevalence of utmost ignorance caused by absolute lack of scientific temperament among the educated upper-caste Hindu elites and upper-middle class, who have monopoly on higher education. This ignorance, which is incurable, is the sole reason that the so-called “highly educated” lot of Hindutva fanatics welcomed him at such a platform. It’s this sheer ignorance that has made the NASSCOM members such pathetic Hindutva fanatics that they feel no shame to cheer for Hindutva rabble-rousers like Narendra Modi or Ravishankar Prasad, who are also invited to the event. It’s sheer ignorance on part of these IT professionals from elite upper-caste Hindu society that makes them support the racist, white-supremacist and fascist Donald Trump regime’s plan to erect a border at the Mexico border. Then it’s sheer ignorance that makes one admire a man as a “man of knowledge” when he talks about the “knowledge of water” in the 21st century at IIT Madras, an institute that was supposed to be a centre of excellence in science and technology but became a Brahminical groom manufacturing machine, which also exports cheap Indian engineers to foreign shores.

This predominance of ignorance, which is rooted in the undemocratic and unscientific character of the Brahminical feudal-patriarchal system, is leading the country’s IT industry and thereby rendering it crippled to take on the challenge of pursuing the path of independent growth. Rather, by showing loyalty to their pro-imperialist class character, the Indian crony-comprador capitalists could only make India a lucrative bait for foreign corporations looking for cheap manpower and quality service for their own business and innovations. Propelled by this eagerness of remaining a loyal lackey of imperialist powers, the Indian IT industry is doing what other industries have done so far – making a living out of selling the intellectual power of India without building any real national asset.

Be it Sadhguru, Narendra Modi or anyone from the corporate world, at the end of the day they will not want the people to gain any form of knowledge but be the slaves of the foreign monopoly and finance capital. It’s not that only the Dalits, Tribals, Muslims and Christians of India are reeling under the juggernaut of exploitation and oppression, rather, by cutting jobs and reducing pay packages, the IT industry is also inflicting wounds upon the upper-caste Hindus who have been historically driving the growth of this industry. The growing unemployment caused by the economic crisis of the US finance capital will not wither away anytime soon, however, will ensure a lot of software and IT professionals face the music of economic downturn in the coming days. The cuts will not spare even those who think that by acting as the mobile trumpets of the Hindutva camp they will remain perched in the privileged seat.

For India, it’s not the right time to glorify ignorance, as it has crippled the free economic development of the country and generated bigotry, communalism, casteist apartheid and strong patriarchal dominance. It’s time for knowledge, the very knowledge that will expose the hollow doctrines of the godmen and women who hijack the people by exploiting their ignorance and thereby become the parasite class that survives on the labour of others. A massive and gigantic tide of people’s struggle is rising throughout the country against the Modi regime and its anti-people policies, not in the ballot boxes but in the fields and factories. The day this tide becomes a formidable force to reckon with, the Narendra Modi-led Hindutva fascist rule and its corporate funders will find no escape route like their partner Nirav Modi. Ignorance must be destroyed with the light of knowledge to hasten the arrival of that day. Until then, let NASSCOM or Sadhguru reiterate their senseless rhetoric. May be next time NASSCOM will invite Baba Om or Sakshi Maharaj.