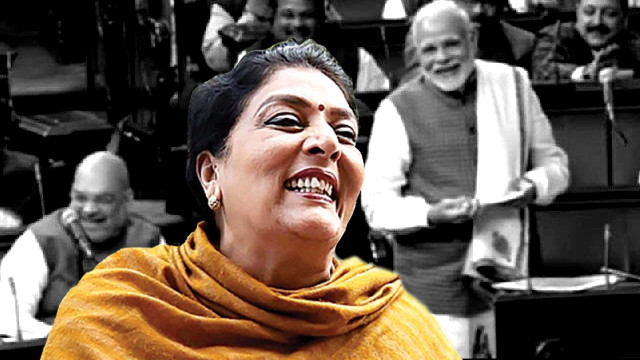 There, amidst the roar of the laughter of numerous men, who kept grinding their teeth after hearing a below-the-belt objectionable jibe by their leader  towards a woman who laughed at his ridiculous speech in the parliament – called the temple of democracy, the spirit of Surpanakha, the sister of Rakshasa king Ravana, found herself abused again by the very men, who judged her for being quite outspoken about her sexuality, for desiring to be with men of her own choice. They still hate her, as she was herself.

For the patriarchal and misogynist society, Surpanakha is at fault, alike and unlike Sita, the queen of Rama, who was considered the pious and chastise queen but still abused and asked to pass through the test of her chastity and fidelity by her husband. Surpanakha was at least clear to her concise, she tried to live her life outside the hypocritical patriarchal norms, and even after being despised and attacked by men, she never apologised for being herself, neither to her brother nor to the society.

The self-styled disciples of Rama, the king of Ayodhya who fought a war against Ravana and established Brahminical hegemony on the people of Lanka, can’t tolerate women expressing herself freely; her opinion, her independence, her saying “no” to advances made by men, her criticism and even banal things like her drinking beer or laughing. The misogynist jibe against Renuka Chowdhury, a former Union Minister and a five-time MP, didn’t come from a saffron-clad Hindutva hate monger, rather it came from a man who leads this government that runs several campaigns on women upliftment and empowerment.

This isn’t an irony. It’s not that the BJP or the RSS, its ideological mentor, doesn’t like women. They are equally serious about having girl child on earth and to maintain a better sex ratio. However, like all other theological-fascist organisations driven by bigotry, these people won’t like or allow women to compete men or do things that the men and the society ruled by them reserved exclusively for themselves. The Hindutva fascists are strongly patriarchal and they demand respect for the prime minister, which according to them should come automatically because of his position, despite they themselves not showing any respect for the prime ministers of the past who didn’t belong to their party. Likewise, they want women to be subordinate to men, live their lives showing obeisance to men and never live their lives as free individuals.

Surpanakha, the free woman, who dared to propose love to a man of her choice and expressed that desire in the most unapologetic form was despised, mocked and physically attacked for being dark-skinned, one of the physical attributes of the tribals who were equated with demons by the Brahminical history due to their skin colour and their negation of Brahminical values. The racial supremacist Brahminical Aryans despised the tribals for the independence and equality women of their society experienced and the primitive life they lived without going by the Brahminical code of morality designed by the Aryan aggressors.

Even today, these Hindutva fascists, who swore allegiance to the Brahminical supremacist doctrine of Manuvad, which advocates ostracism of Dalits and tribals, enslavement of Shudras and women, can’t tolerate the women expressing their desire, individuality or sexuality. The moment women try coming out of the closet where they are locked by the patriarchal society, these guards of the empire start mocking, criticising and loathing her. When such methods don’t work, she is killed, brutally enough, to ensure no other women dare to follow the same course of displaying courage and being herself.

Renuka Chowdhury didn’t attempt to do something extremely radical according to the standards set by the Hindutva camp. She simply laughed at the ridiculous jibes of the prime minister at the Congress, when he tried to escape the volley of attack against his government for failing to deliver anything to the people of the country. When mere laughing by a woman became intolerable to the ears of the man who use his oratory skills to make women believe he respects them, despite being the rabble-rouser leading a bunch of mobsters who kill, rape and mutilate the women of the minority communities, the only way left for him and his sycophants was to mock the woman, mock her for being loud, when women are supposed to shut their mouth. They mocked Renuka Chowdhury and compared her, subtly, to the woman who is mocked in the patriarchal Hindu mythology – Surpanakha – an independent woman.

The vilification of Renuka Chowdhury by the entire treasury bench, the biased ruling by the Chairman of Rajya Sabha, the below-the-belt jibe by Narendra Modi, comparing her to the mythological demonisation of an independent tribal woman, all sums up to show that the ruling classes of the country aren’t quite ready to allow women laugh, mock or criticise them, forget drinking beer in a bar. This subjugation of women has become imperative to protect the Hindutva hegemony and thus from BHU to parliament, from Bastar to Kashmir, the Brahminical patriarchal-feudal regime will continue to attack women unabashedly. Her laughter is sedition for the patriarchal society and so is her desire to be herself.