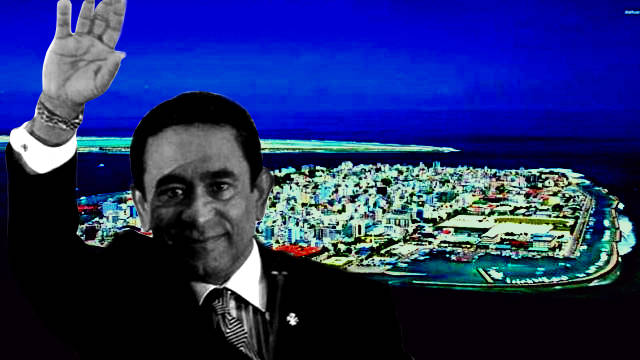 The Maldives is in turmoil after the declaration of a 15-day long Emergency by President Abdulla Yameen, who face stringent opposition in the small island-nation he has been ruling since 2013. The Indian government eyed its political-economic-military domination on the island state since a long time, while China made its way through skulduggery to involve into the politics-economy and military affairs of the state vigorously and outmanoeuvre India. Now, the declaration of Emergency by Yameen has brought another chance for India to re-establish its hegemony in the island nation, which China is trying to stall at all costs to protect its business interests. All back channel conspiracies are on in New Delhi and Beijing to use the volatile situation to bring such favourable changes that would support their cause of expansionism in the island nation.

The political turmoil in the Maldives is caused due to the antagonistic contradiction between two factions of the ruling class of the small country where the economy is majorly dependent on foreign tourism and fishing. As real estate development started with a full swing since the fall of the despotic rule of Maumoon Abdul Gayoom, who ruled the country with an iron-fist for three decades, a lot of money started to flow inside the island-country with the major infrastructure development projects initiated by Saudi, Chinese and Indian firms. However, the tryst with democracy, following the fall of Gayoom rule, didn’t last long, as the regime of Mohamed Nasheed, which ruled the country between 2008-12,  got entangled in severe crisis due to the non-cooperation of the bureaucracy, judiciary and military that extended loyalty towards Gayoom and his over-ambitious half-brother Abdulla Yameen.

By toppling the Nasheed’s government using his influence over the army, judiciary and the bureaucracy, Abdulla Yameen managed to usurp power in 2013 and within few years, he consolidated his autocratic rule. Mohamed Nasheed was sentenced to 13 years in prison for corruption and Abdulla Yameen ensured that the forces loyal to him liquidate all forms of opposition in the country. Under his patronage, foreign countries, especially the Chinese corporations, started grabbing land under the guise of real estate development. According to Nasheed, nearly 16-17 small islands are seized by the Chinese corporations under the guise of real estate development and it was called the largest land grabbing under the pretext of real estate development in the Maldives.

While Abdulla Yameen kept rejecting the accusations levelled against him, his autocratic rule, on one hand, fuelled several large-scale protests and even forced the senior Gayoom to oppose his brother and join the rank of the opposition, on the other hand, even 12 members of the People’s Majlis (parliament) from his party joined the ranks of the opposition, providing them majority in the house. When Yameen arrested the opposition MPs, the Supreme Court intervened and ordered their release, which caused serious trouble to Yameen’s rule. Abdulla Yameen didn’t heed the ruling of the Supreme Court, rather he overturned the verdict and imposed a 15-day long emergency in the Maldives. He also had the Supreme Court judges, who delivered the verdict against his government, arrested. The 82-year-old former president Maumoon Abdul Gayoom was arrested as well and thrown behind the bars. Already the jails are full of opposition politicians whom Yameen considers a threat to his fiefdom in the Maldives.

In such circumstances, rather than innovating effective methods and agenda to oppose the fascist reign of Abdulla Yameen, exiled opposition leader and former president, Mohamed Nasheed is making senseless statements, calling for an Indian military intervention in the Maldives. He recently tweeted for Indian military intervention and later claimed he didn’t mean Indian boots literally but asked the Indian government to send a military envoy to meet Abdulla Yameen and force his government to withdraw the emergency and follow the verdict of the Supreme Court in letter and spirit. However, according to UN laws, no country is allowed military intervention in another country and this is what Nasheed overlooked when he hysterically called for a military intervention. This misadventure of Mohamed Nasheed, asking for foreign gunpower to topple Abdulla Yameen has provided necessary oxygen to the tyrant, as he and the entire ruling Progressive Party is able to use this interventionist approach of Nasheed and his capitulation to the Indian government as a threat and go closer to the Chinese government.

Officially, until now India has only expressed its concern over the prevailing crisis in the Maldives and didn’t spill any beans to give a glimpse of its long-term and short-term strategy over the island country. Despite the rhetoric, the role of India in the Maldives will be according to its Sinophobic and Islamophobic hawkish agenda in the Indian Ocean. When China declined the request from Abdulla Yameen for military support to protect the Chinese business and personals in the Maldives, the Modi government said that it hopes the governments  of all countries will play a “constructive” role in the Maldives and not vice versa. The Chinese will not sit in tranquillity in-case they find the Indians jumping into the fray and playing a role to establish control over the Maldives. However, there are fewer chances that this will escalate to the level of a military stand-off between the two Asian powers.

With the reported request from Nasheed to India and Yameen to China for military support, it looks like both big powers will try to manipulate the politics of the country and violate its sovereignty to safeguard and expand their own business interests and expand their military control over the maritime routes of Indian Ocean. The politicians in the opposition are not actually involving the people of the Maldives to come out and protest against the dictatorship imposed by Abdulla Yameen, rather they are looking forward to outsider support to topple the government. While the people of Maldives have a rich heritage of democratic protests and resistance, the underestimation of their power will help the fascist forces to strengthen their rule under Abdulla Yameen. Even in that case, if Nasheed or any other opposition leader usurps power using foreign intervention, the new government won’t be able to provide any real relief to the people as it will mortgage the country and its economic resources to the big power that helped them ascend the throne.

The seeking of foreign intervention rather than relying on the power of the people to overthrow a tyrannical regime shows that the opposition forces, represented by Nasheed and supported by the Indian ruling classes and the US, will not be able to pave the way to restore real democracy in the Maldives. The attempts by these so-called opponents of Abdulla Yameen are aimed at establishing their own hegemony, instead of democracy, in the Maldives and they don’t represent the interests of the broad masses of common people.

What can truly resolve the problem of tyranny and despotism in the Maldives and end the rule of the corrupt politicians like Abdulla Yameen and his coterie, is the people’s participation in a protracted struggle to restore democracy and protect the sovereignty of Maldives from the neo-colonial expansionism of India and China. The Maldives should get the chance to deal diplomatically with all countries as an equal partner and not as a client and satellite state. To achieve this diplomatic dignity and equality, despite being a small state, the people of the Maldives have to purge the influence of the big powers in their country’s politics, economy, military and foreign affairs. It’s no more a world where small powers must remain protege of the big hawks, who would flex muscle often to keep the smaller ones bullied and aligned with the interests of the bigger powers. The Maldives, despite its size, must assert itself as a self-reliant and independent country that won’t get cowed by any foreign power.

Though Nasheed and his companions have abhorred the path of street rallies, demonstrations and resistance movement, though the entire parliamentary opposition has capitulated to the fascist Abdulla Yameen government and are helping the despot, indirectly, to establish a reactionary Salafist rule and thereby unleash a reign of regress in the largely Sufi Muslim island, the overwhelming voices demanding democracy and liberty cannot be suppressed by this evil empire. As the repression against the people will grow in magnitude, so will the people’s resistance against the fascist rule. It’s a strong, farsighted and independent leadership that’s required urgently to drive the people’s discontent to achieve the political objective of establishing a people’s democratic and progressive government in the Maldives. The faster such a leadership is formed through the crystallisation of people’s struggle, the better it will be for the future of the Maldives.