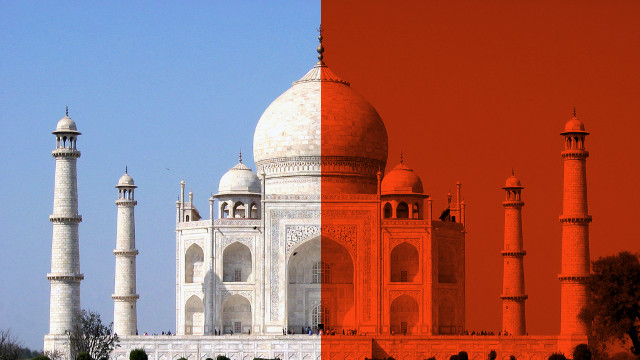 As if the rechristening of various UPA-period schemes, projects and historic places were not enough during the extremely hyperbole BJP rule, that now we are about to witness the greatest reclamation of all times – Taj Mahal. The magnificent marble mausoleum built during the reign of Mughal Emperor Shah Jahan, a marvel of medieval Mughal architecture, is a thorn-in-the-eye for the BJP and the Sangh Parivar at present.

Under the patronage of the Modi government in New Delhi and Yogi Adityanath government in Uttar Pradesh, the RSS-led Hindutva camp is trying to fan communal hysteria throughout India against the Taj Mahal by propagating a virulent bush telegraph about the mausoleum being an ancient Shiva temple that the “evil” Mughals converted into a temple. The Sangh Parivar’s notorious hate mongers are demanding the renaming of the Taj Mahal to Tej Mandir. The best part about this story is  – a city court also admitted a plea by Hindutva fanatics few years back seeking the renaming of the mausoleum.

Within just three years of coming to power, the Narendra Modi government has already renamed a large number of schemes of the previous government after some of the prominent leaders of the Sangh Parivar, namely Deen Dayal Upadhyay and Shyama Prasad Mookerjee. The very popular and extremely charismatic name of “Mughalsarai” station was recently changed to “Deen Dayal Upadhyaya Junction”, violating the Railway’s own rule of not naming stations or trains after individuals, and despite several objections, nothing much was done to stop this distortion drive. This is just one example of many, as the engine of name changing and distorting the history of India is going on with extreme communal voracity.

Ironically, it was earlier the BJP that attacked the Congress Party for naming all its schemes and projects after its leaders, and now, with the tables turned, the BJP is doing exactly the same thing and finds nothing immoral in this unbridled spree fuelled by extreme communal hatred. The agenda of the BJP appeared clear when it wanted to obliterate the Nehru-Gandhi legacy and replace it with its own, by propagating the values and ideals that the Hindutva hate mongers like Savarkar and Golwalkar stood for. But suddenly this agenda of BJP is emerging to be something more than just blurring the Nehru-Gandhi legacy. It’s about rewriting the history with the saffron ink.

BJP MP Vinay Katiyar in his interview on Monday abruptly questioned the national significance of India’s iconic Taj Mahal. Not only he questioned its historic and national significance but also informed the media, and through media- the very nation, that Taj Mahal, which culturally represents India on a global scale, will be converted into ‘Tej Mandir’ soon. How soon, that is still to be figured out!

This remark of him came when he was giving an interview to a news agency about the “Taj Mahotsav” being held in Agra. Katiyar said, “There is not much difference between Taj and Tej. Call it Taj Mahotsav or Tej Mahostav, it is the same thing.  Our Tej Mandir has been turned into a cremation ground by Aurangzeb. Taj Mahal will be converted into Tej Mandir soon.”

Katiyar, already serving criminal trial for his role in the demolition of the Babri Masjid in 1992, had in October 2017 claimed that the Taj Mahal was actually a Shiva temple. “The Taj Mahal is a Hindu temple. There are all the signs of (Hindu) gods and goddesses, there used to be a Shivling there which had water dripping on it from up top. That ling was removed and a mausoleum built there,” he had earlier said.

The Taj Mahal, listed as one of the new Seven Wonders of the World, was also excluded from the Yogi Adityanath government’s booklet promoting tourism in Uttar Pradesh last year. Justifying the decision to remove the monument, BJP MLA Sangeet Som claimed that it was built by “traitors” who wanted to wipe out Hindus. This very MLA is  accused of inciting and leading the communal pogrom of Muzaffarnagar in 2013, in which more than 100 Muslims were killed, many women raped and thousands were evicted from Muzaffarnagar and Shamli.

The frequency of such inciting statements being delivered is quite high. The communal violence is at peak since BJP came to power and there is no denying fact that every now and then, there are negative assertions delivered by those who hold power. The acrimony against the Muslim community is nothing new now. From being called outsiders to terrorists and Pakistan loyalists, there is nothing much left to incite more hatred against the community, which has been a significant and inalienable part of India for centuries.

However, now the remarks of transforming a historic monument, which has continued to serve the pride of the nation for hundreds of years is not only disconcerting but a disgrace to entire secular and cultural symbolism of the Indian nation. Such comments force one to think where, as a nation, we are heading? And what future we hold for our beloved India?

The biggest tragedy is that these threats are not emanating from fringe elements who can be brushed aside, but from the very people who are infamous for their role in demolishing a historical structure and for instigating and micromanaging a communal pogrom against the Muslim community. These people are sitting legislators, parliamentarians and have been officially attached with the ruling party.

So the threat of rechristening and possibly demolishing Taj Mahal, coming from the pugnacious hate mongers, who hold a track record of turning historical monuments into the debris of communal hatred, cannot be taken lightly. The future of the Taj Mahal will, therefore, remain under an ominous threat. To save the icon of love, as it’s popularly called, the people of the country need to stand up and resist the hate mongers who are trying to thrust the rapier into the very fabric that is holding the people of the country together for centuries.