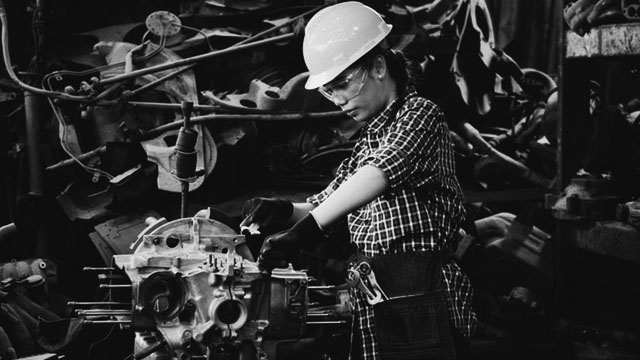 The economic crisis has engulfed the entire country and its poor masses, from the agrarian workers to the factory workers, the web of suffering and trauma has got them all. As massive lay-offs are throwing people out of jobs and pushing families into financial uncertainties, the women are suffering the most.

Since ages, the working class in India has a skewed gender ratio across all industries; it’s unlikely that in any industry the gender disparity is addressed well. The most traumatised industry in the present crisis is the automobile industry, where layoffs have taken an epidemic form.

Though both men and women are facing lay-offs and are rendered unemployed, as the unemployment rate has reached a four-decade high, however, with the recent lay-offs, the women are going to suffer more than their men counterparts for various reasons.

According to the World Bank’s data, women are 18.75% of the total industrial workforce in 2018. In the hard-hit automobile industry, women had never been a core part of the blue-collar force.

According to the Fourth All India Census of MSME 2006-07: Registered Sector, 60,712 women were employed in the micro, small and medium enterprises (MSME) of the automobile sector, however, things started changing for them lately, before the sector went to coma.

Different companies started opening gates to women for their shop floor workforce. Tata Motors boasted of 4% of women employees in its shop floor as on July 31, 2018, while Mahindra & Mahindra’s automobile section had 7.5% of women workers in the shop floor.

Royal Enfields, the renowned motorcycle maker, had a 10% increase in women workforce year-upon-year in the shop floors for three years and aimed at making gender diversity 30% of the shop floor workforce.

In January 2019, Morris Garage’s MG Motors boasted of 31% gender diversity, one of the highest achievements in the industry. However, industrywise, it was a shortlived joy as things started falling apart soon.

More than 286 dealerships in 271 cities of India were closed in 18 months until July 2019. More than 200,000 have lost their jobs in these, including women. At the dealership level, women have been playing a key role in the sales and support functions.

Though the Federation of Automobile Dealers Associations has no concrete figure on the number of women who have suffered due to the lay-offs in the dealerships, there is no doubt that the number will be over 20,000 considering 10% of the women workforce in sales and marketing roles, which were the first to be axed since the beginning of the automobile crisis.

By August 2019, 350,000 jobs were lost in the automobile manufacturing sector alone. This must have taken a toll on thousands of women workers who have attained training and began working in the shop floors in recent years.

This estimate is sans the number of women employed in the upstream and downstream MSME ancillary industries in Tamil Nadu, Maharashtra and Haryana, the hubs of automobile manufacturing, who also lost their jobs due to the slump.

For women in India, getting a regular or contractual job that’s safe for them and the one they can actually do without any family troubles is actually a troublesome process. Especially, at the bottom of the pyramid, where the women have not many opportunities due to their socio-economic constraints caused by restrictions imposed on the gender in the matters of health or education, it’s quite hard for women who lose employment to sustain.

It’s never easy for a man, who is preferred for employment more than a woman, to get back a job during a recession. For women, who have got specific training, eg, shop floor training, it will be impossible to settle in any other sphere, when the entire economy is a sinking boat. They have to either wait for their sector’s recovery or give up hope altogether.

Though woman’s income is considered as the secondary income in most of the families — an add up to the man’s income — it’s a different ball game when it comes to the manufacturing industry. The women, who are severely exploited in this sector, are mostly the principal or the equal earners in the families, where they fulfil many family needs with their meagre income.

With a loss of employment, these women don’t only suffer economically, their status within their own families falls drastically, as they lose their limited say, and their limited scope to influence core household decisions.

As they have little disposable income or savings left, it becomes hard for the women to spend money for themselves, which impact the women-centric industries, especially those catering to the mass market in sectors like colour cosmetics, personal care, women’s hygiene, healthcare, textiles, etc, resulting in more job cuts.

Moreover, when the sole men wage earners also lose their regular jobs, the pressure falls on the women, who may not have worked outside ever in their lives, to meet up the financial challenges. This brings them to the unemployment pool along with those women who have been laid off.

In most cases, these women are rendered as cheap labour for unorganised sectors or domestic workers, if they can’t acquire other hard skills to survive. Thus, a large number of women will go missing from the regular economy overnight, keeping the women participation at a historic low.

This demeaning of women leads to their extreme exploitation, including sexual exploitation, which also causes major setback to the goal of gender parity. The recent economic crisis has not only unlocked demons like unemployment and the vicious cycle of poverty, but it has also opened the doors to far more gender oppression, the subjugation of women and sexual violence against them.

The current signs and the reluctance of the government to deal with the issue show that the economic crisis will continue unabated and the women will continue to suffer the ordeal. This will eventually become a very worst phase for the women workforce of India and take a long time to recover.