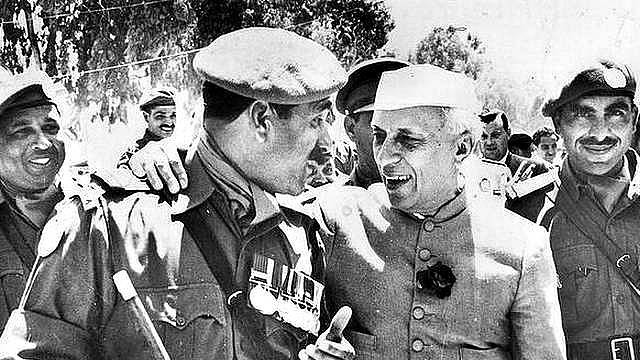 The media is portraying the visit of Narendra Modi to Ramallah of Palestine as the “first ever” by an Indian prime minister to the “State of Palestine”, as recognised by the United Nations. However, beneath such irredeemable perversion of history using a host of twisting and tweaking of words and facts, the insouciance of the mainstream corporate media that plays the role of a lapdog of the regime, cannot hide for long.

Technically Narendra Modi happens to be the first prime minister of India to visit the “State of Palestine”, however, historically, he isn’t the first prime minister to set his feet on the land of Palestine. The modern Zionist-terrorist state of Israel was founded with the support of Western imperialism on the land that historically belonged to the Palestinian Arabs. The entire stretch of land on which the Zionists have established their autocratic and murderous rule belongs to the Palestinian people. However, worried about an anti-Zionist people’s revolution, the Western imperialist forces, led by the US, the chieftain of global imperialism and the core supporter of the Zionist Israeli regime, accepted the two-state solution as a stop-gap measure in the 1970s, after the Arab-Israel war.

Before this State of Palestine was recognised in 1988, it was Jawaharlal Nehru, the first prime minister of India, who was also the first prime minister of India, visited the land that belongs to the Palestinian people. In 1960, Jawaharlal Nehru reached Gaza of Palestine (then under Egyptian control) to oversee the deployment of Indian Peace Keeping Force there. Jawaharlal Nehru went to Palestine through Beirut and on his way back in a UN plane, the Zionist Air Force flew two fighter planes alongside Nehru’s plane and did some manoeuvres that were a threat to the security of the UN plane. The reason of their adventurism was to display to the Indian ruling classes their utmost dislike of the fact that the Indian government, despite recognising the Zionist Israel as a country, still supported the cause of a free Palestine.

Though, despite all rhetoric and stunt of Non-Alignment, the Nehru government had to stoop before the US and the Zionist Israeli regime for weapons and money in 1962 to fight its war of aggression against China, then ruled by the revolutionary communists led by Mao Zedong, it still carried a sham signboard of supporting the Palestinian people against the Zionist Israeli regime and called for a peaceful two-state solution, negating the right of the Palestinians over the entire stretch of land that belonged to them before 1948.

India’s ruling class supported the Palestinian cause despite being inherently Islamophobic because of the pressure exerted by the Soviet Union that controlled a significant part of the Indian economy and military as India was turned into a satellite state, a neo-colony of the Soviet social-imperialists in the 1970s. The Indira Gandhi government and later governments of India, of different hues, supported the officials of the PLO’s Fatah faction led by Yasser Arafat for his diplomacy-laced battle against the Zionist Israeli regime.

When Yasser Arafat surrendered the interests of the Palestinian people by capitulating before the US and the Zionist Israel in the Camp David summit of 1993, India welcomed his capitulation and went on to build up a strong relationship with the Zionist state, with which it had bridged diplomatic ties in 1992. It was actually through its duplicity on the question of the independence of the Palestinian people that the Indian government hobnobbed with the Zionist Israeli regime since the 1950s and unmasked the illicit affair in 1992, the same year that India embraced neo-liberal economy and the Babri Masjid was demolished by Narendra Modi’s men.

When Narendra Modi was praising “Abu Ammar” – as Yasser Arafat is called by the state-personalities of the Palestinian National Authority, he wasn’t praising a man who once led a fierce struggle for the independence of Palestine from the Zionist Israeli colonial occupation from the 1950s to 1970s, he was praising the man who became a friend of the Zionist regime and would discuss compromises with them at Oslo in 1993 or Camp David in 2000, the man who wouldn’t mind becoming a guest of the US imperialism, or accept a Nobel Peace Prize for talking and compromising with Zionist mass murderers like Yitzhak Rabin or Shimon Peres. Narendra Modi’s praise for Yasser Arafat comes from his love for the Zionist Israeli regime, however, his glib statement on the cause of the Palestinian people miss a lot of important stands that even the reactionary Indian government followed for long.

Narendra Modi has been a staunch supporter of the Hindutva camp that strongly advocates the annexation of the Palestinian nation by the Zionist Israeli regime, which was founded with a notion that despite regional, cultural, national and linguistic differences and contradictions, all Jews, irrespective of their class, form a single nation and Hebrew is their language of communication. This doctrine supports the Hindutva fascist doctrine, which says that all followers of the Hindu religious belief are a single nation and Hindi and Sanskrit should be their language. It was the same ideology with which Pakistan was formed after bifurcating India and it’s the same ideology that drives the religious bigots in the Indian subcontinent. Even Benjamin Netanyahu endorsed the vision of Hindutva and upheld Sanskrit as a uniting language for all Hindus.

Thus it’s absolutely impossible for Narendra Modi or any other Hindutva fascist to support the cause of liberation of Palestine; for them, it will mean negating their own belief, as well as relinquishing the domination of the Indian state over Kashmir, Nagaland, Manipur, etc. where people are fighting for their right to self-determination. Supporting Palestine would be an “Albatross around the neck” for the Hindutva camp and Narendra Modi, it’s only through his phoney statement on Palestinian independence from diplomatic platforms that Narendra Modi will skip the very responsibility of supporting the cause of the Palestinian people, which all governments before him had done.

So after his statement supporting the cause of Palestine’s independence in vague terms, the prime minister of India turned the banal visit into a spectacular one by trumpeting it as the first of its kind to sublayer the deep hatred that he and his Hindutva fanatic sycophants have for Palestinian people. However, even this lie couldn’t stand the ground, except for it being only technically correct, as Jawaharlal Nehru, the man who was deeply pro-imperialist but is still despised by Narendra Modi and the Hindutva camp so that he could be blamed for all failures of Narendra Modi’s government, formed more than 50 years after his death, still is historically the first prime minister of India to visit Palestine. Once more Jawaharlal Nehru tricked Narendra Modi and the latter would need some new excuses to loath Nehru in public after the Palestine fiasco.