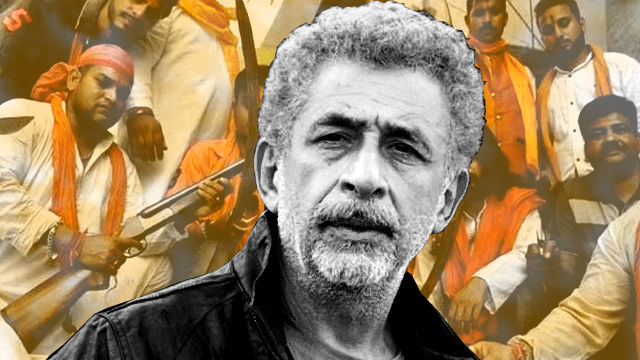 Naseeruddin Shah expressed his fears as a ‘Muslim’ name-bearing man and a father in Modi-fied India, where, according to him and facts, his children, who are irreligious, can be lynched by a Hindutva-incensed mob just because of their identity. The renowned film actor recently expressed his fears for the lives of his children in view of the rise in mob violence in the country. While speaking to Karwan-e-Mohabbat, Shah expressed his anguish over the growing incidents of mob lynchings in the country, where the culprits are attacking Muslims with impunity. In the context of the few-week-old Bulandshahr violence, where a police inspector was killed by Hindutva fascist terrorists, Shah felt that cows have become more precious than human beings in India. The hell broke loose on Naseeruddin Shah after his views became public and the lemurs of the Hindutva fascist kingdom of Narendra Modi, masquerading as patriots, started hurling their choicest abuses at Naseeruddin Shah, proving how correct the veteran actor was when he expressed his fear about the growth of intolerance in India.

The massive protests by the RSS-affiliated Hindutva terrorist organisations in Congress-ruled Rajasthan’s Ajmer, where Naseeruddin Shah was supposed to visit to launch his book during the Ajmer Lit Festival, forced the organisers of the event to call it off. No step was taken by the Congress to control the law and order in Rajasthan’s Ajmer, where it recently formed a government. The impunity with which the Hindutva terrorists rampaged in Ajmer against the lit fest right under the nose of the police, showed how crippled the Congress and its government is before Hindutva fascism even in a state ruled by it. This proves that though the cow vigilante BJP was defeated in the recently held polls, the power of the Hindutva fascists didn’t wither away, rather they have become more violent, stronger and rambunctious after losing power in their strong turf.

Navnirman Sena Uttar Pradesh, a unit of the Hindutva fascist Maratha chauvinist party led by Raj Thackeray, accused Naseeruddin Shah of being a ‘traitor’ following the RSS’ modus operandi. One of their Hindutva terrorist kingpin in the state, Amit Jani, even booked a ticket for Shah to Pakistan’s Karachi on 14 August, on the occasion of the neighbouring country’s so-called ‘Independence Day’. An act that attempts to portray the Indian Muslims as ‘Pakistanis’, which by default means ‘traitor’ according to the Sangh’s doctrine. BJP’s sycophant Anupam Kher, a former film actor and a crumb collector under Narendra Modi’s rule, also sarcastically criticised Shah asking “How much more freedom you want?”, forgetting that the Constitutional Republic is bound to provide absolute freedom to all its citizens so that they can express themselves and their opinion without any fear of retribution. These fascist rhetoric, abuse and trolling validated the fears expressed by Naseeruddin Shah as a man with a ‘Muslim identity’ in Modi-fied India.

While Naseeruddin Shah and his brother and former VC of Aligarh Muslim University, Lt General (Retd) Zameer Ullah Shah, condemned the vitriol against the actor, not much of the opposition came out in support of the actor to ensure that the BJP doesn’t gets a chance to project them as fellow ‘anti-nationals’ like the ‘Muslim’ Naseeruddin Shah. This compulsion to appease Hindutva fascism-incensed upper-caste voters has silenced the parliamentary opposition parties. Not only the Congress, which paid lip service to the rights of Naseeruddin Shah but all political parties from all hues and shades remained more or less indifferent towards the trolling Naseeruddin Shah faced. While loose cannons of the Hindutva fascist camp led by the RSS didn’t refrain from firing their salvo targeting the actor, the opposition responded meekly, with an intention to defend and not to assert the rights of a scared Muslim, a privileged one in this case.

It was not long ago that Naseeruddin Shah slammed the Indian Muslims for being too much into religion and for abhorring liberalism and secularism. In an article published by the Hindustan Times on 2 June 2017, Shah wrote about his liberal, irreligious and secular beliefs, his life as a privileged Muslim where he didn’t face any repercussions after marrying a Hindu woman and he told his less fortunate Muslim compatriots to adopt more ‘Indianness’ and adopt education and hygiene to grow in life. The article, written with privileged and elitist arrogance, didn’t touch the topic of the constant fear under which the hapless poor Muslims, 90 per cent of the community, live in Modi-fied India, where their Constitutional right to preach and practice their own religion comes under attack from the militant Hindutva-incensed feral mob. Forget the practising of the religion, even their identity is enough for them to be killed in public and a court can grant bail to the culprits by saying that such a lynching took place because the victim’s appearance provoked the killers for which they can’t be blamed! Only the privileged and elite Muslims have the liberty to call themselves liberal, an identity that helps to survive during the tough times, the poor and oppressed Muslims can’t afford that luxury and hence die due to the bestiality of the Hindutva fascist mob.

In such a situation, Naseeruddin Shah kept preaching to the Muslims the need to be liberal and educated, ignoring the fact that 90 per cent of the Muslims are deprived of the resources required to have their children two square meals a day, forget a good western education that can inculcate liberalism and secular values. If the Muslims in India had equal access to resources- economic, social and political, like the 30 per cent upper-caste Brahmins and Savarna elites and middle-class, then they would’ve had a choice to modernise themselves (which the casteist Hindus didn’t even after 70 years of India’s so-called ‘independence’). Quagmire in abject poverty, destitution and deprived from resources (forget resources – the Muslims even face discrimination in renting a house, shop or landing up in a good job) all that the Muslims have to bear the pain and the sufferings peacefully is their religion and its orthodox doctrine that show them the dream of a better afterlife at the cost of sufferings in this ‘worldly life’. Snatching that comfort zone and criticising the Muslims for remaining in dark, without taking any conscious and concrete attempt to enlighten, arouse and organise them for progress, secularism and democracy is sheer hypocrisy on part of someone like Naseeruddin Shah.

Now when the heatwaves of mob lynching and communal vitriol reached his doorsteps, when Naseeruddin Shah is finding that even the lives of Hindu policemen aren’t safe in Modi-fied India, then he and the privileged elite Muslims like him are able to realise the potency of the threat that looms large like the Sword of Damocles on the members of the minority community only because of their identity. This is the watershed moment in which the privileged Muslims, including the self-preserving ‘Durbari’ Muslims, the courtiers of the Modi regime, are realising that they’re safe in India until they remain quiet and endorse each incident of mob violence, communal pogroms and massacres with their silence and indifference. It’s high time that Naseeruddin Shah and his ilk must understand that mere western education, adherence to pluralism and secular values won’t prevent their own fateful end as a large number of maggots hatched by the present dispensation and nurtured by the rotten meat of the semi-colonial, semi-feudal Indian society’s corpse, are out there to feed upon Muslim blood and flesh. The time calls for a real, united struggle against Hindutva fascism and all its manifestation by all oppressed and marginal people, including the Muslims, and to lambast the very oppressed and persecuted people from an elitist position will do more harm than good.