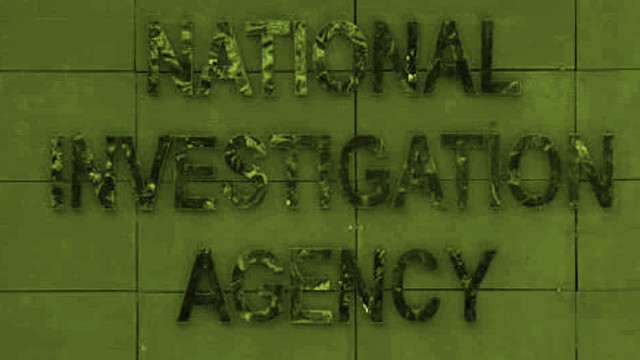 The NIA recently declared that it has busted a terror network of the ISIS in India by arresting 10 people from different places of Delhi and Uttar Pradesh, who, according to NIA inspector general Alok Mittal, were planning to launch a series of terrorist attacks on Delhi and nearby areas targeting BJP-RSS leaders/offices, busy marketplaces, vital installations and other targets on New Year’s Eve. It could have been genuinely acknowledged as a major terror network busting by the NIA under Narendra Modi’s reign unless one would see the political and technical undertones of the so-called ‘bust’.

This ‘busting’ of the alleged ISIS terror module, like most of the cases handled by the NIA, leaves a long trail of Islamophobia and dirty politics behind it. When Alok Mittal declared that the purported targets of the suspects were the BJP and the RSS leadership, it made clear who drafted the script of this new round of Islamophobia spread by one of India’s most notorious instruments of state terror used against the Muslim community. By portraying the leaders of the BJP and the RSS, vulnerable of an Islamist terror attack, the NIA tried to project the Hindutva terrorists, who have crimsoned their hands in the blood of innocent Muslims lynched throughout the nation, in positive lights and tried to rake up sympathy for them.

As the BJP faced a drubbing in the recently-held assembly elections in three states ruled by it, there is an anxiety in the corridors of power in New Delhi and the RSS headquarters in Nagpur. Narendra Modi and his RSS handlers have gauged that there is a high tide of anti-incumbency rising against their rule throughout the country due to their utter indifference towards the people and their shameless corporate bootlicking since usurping power in 2014.

Even Hindutva hate mongering and jingoism isn’t paying any dividend. As an attempt to renew the Ram Temple agitation in Ayodhya and New Delhi flopped, the BJP was rendered frustrated, which made the Modi government bring in draconian measures that allow the security and intelligence agencies to scan any computer in the country and implement social-media censorship. These measures are adopted to curb the growth of dissent on online spaces and to gag the critical voices. However, the special weapon of xenophobia that’s aroused by accusing random Muslims as terrorists, especially those who are incapable of defending their rights in the court, always begets victory for the BJP. The Gujarat model has enough evidence of this fact.

To find a respite in this hostile environment and to give a fillip to its electoral fortune by reigniting the flames of anti-Muslim hysteria throughout the country by narrating tales of Islamic terrorism and a purported Muslim aggression on India, the BJP and the RSS are shamelessly using all state apparatus that they have under their control to build up a script that can polarise voters. The NIA, which once diluted the terrorism charges against Hindutva terrorists like Sadhvi Pragya, Colonel Purohit and Aseemanand of the RSS-affiliated Abhinav Bharat, who were arrested by the martyred Maharashtra ATS officer Hemant Karkare, kept exhibiting its sheer Brahminical, Islamophobic and pro-Modi stance ever soon the poster boy of Hindutva became India’s prime minister. It didn’t shy away from showing its loyalty to the regime once more at a crucial hour by inventing an ISIS terror module, which is a leitmotif in the Sangh propaganda.

The corporate-controlled mainstream media, which acts as the lapdog of the Narendra Modi’s regime, joined the fray with the NIA to give authenticity to the story of the ISIS module busting. Through media trial of the accused, who are condemned as ‘terrorists’ by these media outlets as soon as the NIA released its story,  these big toady media outlets are helping to build a sacrosanct image of the NIA and adding authentic hues to the thriller plot it publicised. No critical view is used to analyse the facts and the figures given by the NIA, which can easily prove that the accusations are baseless and have one goal- to polarise Hindu voters before 2019 general election.

Consider Hindustan Times; it’s a media outlet whose management reportedly agreed to run a Hindutva fascist propaganda on behalf of the Modi regime during a sting operation and which fired Bobby Ghosh from its editorial board for tracking and publicising the series of terrorist hate crimes committed by the RSS and other Hindutva fascist organisations. The same Hindustan Times published a story on the arrest, narrating the police story and also published a picture taken from a video that shows the weapon cache seized by the NIA.

In the above photograph shared by the Hindustan Times, one can see few country-made one , country-made pistols, Samsung J2 mobile phone cases, chargers, plugs, a so-called ‘rocket launcher’ that looks quite clunky to be one (people are alleging it to be a hydraulic pressure equipment used in tractor trolleys), and a lot of ‘chocolate bombs‘ (usually by kids during Diwali and other occasions). There is a print-out of a purported Islamic State logo and the NIA also declared recovering knives and swords. Though there was a talk about the recovery of plastic explosives and ammonium nitrate used for making IEDs, there was no visible trace of them in the image.

If the ISIS members, with an alleged foreign handler, were trying to start their so-called Salafist terrorist Jihad with firecrackers, unreliable country-made guns that even local goons do not use these days and a strange rocket launcher, then it’s evident that their Jihad is as much a threat to national security as someone’s Diwali crackers.

The terrorist organisation, whose members are notorious of launching terror attacks on the people in Europe, Africa and Asia, which never attacked any political or military establishment outside Iraq and Syria during its existence since 2013, can’t take a call on targets unless it gets a clear directive from its founder-cum-sponsor organisations, the CIA and the Mossad. Trained by the CIA and the Mossad to fight against the Syrian government, the ISIS terrorists are not going to act in a naïve way when building an official chapter in a foreign country, after losing its so-called state.

Terrorists of a notorious organisation can’t be expected to discuss their plan, radicalisation programme and operational details using internet messengers, social-media or the so-called ‘dark web’, which has no real existence outside the police-state’s hysteric parlance. Yet, if the NIA’s inspector general is to be believed, then the dangerous terrorists did exactly what would throw them inside the trap laid by the government. With all its loopholes and with its naked reliance on corporate media to build up its case, the NIA story can’t survive if it’s questioned with courage by journalists.

It’s always easy for the Hindutva fascist riot mongers and mass murderers, who are ruling India with impunity and turning it into a massive surveillance and police state, to safeguard their rule and the profiteering of their crony, comprador and foreign corporate masters by diverting the attention of the common people, especially the urban, upper-caste Hindu middle-class, who play a key role in the elections due to their 33 per cent proportion in the population, by kindling xenophobia through such ‘terror plot’ stories.

UAPA is applied against the accused of such cases and it will take years for them to prove their innocence and some of them may even be killed by the state to appease the ‘conscience of the nation’ which is of course identified as a ‘Hindu nation‘. Though the court trials may find the accused, innocent, like numerous other youth of the minority community who were condemned by media trials in the 2000s and had to stay in jail for years before their acquittal, however, like them, these accused may also find it difficult to return back to their normal lives.

At a time when the Modi regime is having a dearth of issues and subterfuges to divert the people’s attention from its utmost failure in delivering upon the promises of ‘development’ and ‘better days’, at a time when a police officer is brutally killed in broad daylight by a gang of Hindutva fascist terrorists and the government of the BJP ignores his death and focuses only on a purported case of cow slaughter, the BJP and the RSS may cling to the unravelling of the terror plot by the NIA and the lapdog corporate-controlled mainstream media to score brownie points before the Lok Sabha election.

When the RSS and the BJP leaders receive their victimhood certificates from the NIA, even after being responsible for massive anti-Muslim genocides, incitement of communal hatred, proliferating bush telegraphs like epidemic blisters to polarise the Hindus, and organising mob lynchings of Muslims, then the so-called neutrality of the NIA, that is funded by taxpayers’ money, becomes farcical and its ugly Brahminical fascist core gets exposed.

The move to help the RSS and the BJP play the victim card, plan and execute false flag attacks to build up mass support on their behalf and to isolate the already marginalised, isolated and ghettoised Muslim community, will not sink in easily, as it will not be easy to befool the masses with communal rhetoric and it will be hard to carry out Hindutva proselytisation unlike 2014.

The egregious failure of the VHP and the RSS to rake up popular support for the signature Ram Temple campaign is a symbol of this imminent doom of the Hindutva camp and no thriller plots about terror modules of the ISIS by the police machinery will alter the equation now. It’s important that all civil rights and human rights group, democratic advocates and people’s democratic organisations build up a massive movement against the anti-minority witch hunting by the Modi regime to spread anti-Muslim hysteria in the country so that the communal forces can’t win any victory in their nefarious schemes.