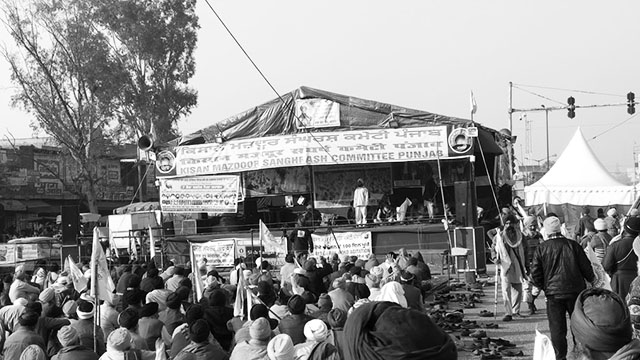 On May 26th 2021, the farmers’ protest movement at Delhi against three anti-farmer farm laws reached its sixth month and, at the same time, became one of the longest sit-in protest movements in India’s history, surpassing the women’s sit-in demonstration against Prime Minister Narendra Modi’s contentious citizenship matrix at New Delhi’s Shaheen Bagh. Despite six months of the farmers’ protest at Delhi, the Modi regime continues to remain obstinate and refuses to repeal the laws.

Celebrating the completion of six months of the farmers’ protest at Delhi the progressive and democratic forces burned the effigies of Modi and his capitalist sponsors like Gautam Adani and Mukesh Ambani, who are the direct beneficiaries of the new pro-corporate farm laws, on May 26th. Many trade unions have also joined the exercise while observing COVID-19 protocols.

As the Modi regime remains firm on its earlier stand of not repealing the farm laws, the farmers have decided to up their ante. On May 28th, Bharatiya Kisan Union (Krantikari) [BKU (Krantikari)] Punjab state president Surjeet Singh Phul addressed a press meeting, along with Haryana BKU (Charuni) chief Gurnam Singh Charuni, to inform that farmers’ organisations from 10 states are going to join and strengthen the farmers’ movement under the Samyukt Kisan Morcha (SKM) against the farm laws.

Phul informed the press that the farmers’ organisations from 10 states had met to discuss how to strengthen the ongoing farmers’ protest. He informed that the meeting well went although due to certain challenges the representatives from far-away states like Bihar, Madhya Pradesh and Maharashtra couldn’t join it. The agenda, according to Phul, has been to ensure how those organisations that remained out of the SKM, for different reasons, can be brought together in the movement to strengthen it.

A new platform named Bharatiya Kisan Mazdoor Federation (BKMF) has been formed by these organisations from the 10 states, according to Phul. Charuni said that there has been a discussion with 38 organisations on strengthening the ongoing farmers’ movement. Charuni informed that a five-member committee will be formed to steer the BKMF and a convener will be elected as well. He said with more organisations joining the BKMF platform the committee will be accordingly expanded.

Charuni also informed that apart from strengthening the six-month-long farmers’ protest in Delhi, the BKMF will also aid and support movements in other parts of the country, especially in Chhattisgarh, where police firing killed three recently. This diversion of activities is a new move after six months of the farmers’ protest at Delhi. If the BKMF can build up or support mass movements by farmers and workers in other parts of India, then it will be able to thread movements of different sizes and intensity and increase the pressure on Modi’s Bharatiya Janata Party (BJP) and its sclerotic rule.

Since the time the farmers of Haryana and Punjab rose against the three anti-farmer laws of the Modi regime, the BJP, using its propaganda prowess, vilified the protest movement by calling it a handiwork of “middlemen”, who are given legal validity in these laws, contrary to the government’s claims. Following the farmers’ march to Delhi and their tractor parade on January 26th, the BJP and its toady press have accused the farmers, mostly from Punjab, as separatists and remained mum on the farmers of Haryana and Western Uttar Pradesh.

If the BKMF can build up local farmers’ struggle in different states, then it will be a boost the spirits of the agitating farmers at Delhi’s borders. The more the farmers’ movement will spread all over India, the more it will become lethal for not just Modi and the BJP, but also the big corporate houses that are determined to suppress it.

The farmers’ resilience has shown nothing can defeat or demoralise them now. After six months of the farmers’ protest at Delhi, it’s time to localise, diversify and intensify the movement to force the ruling classes to capitulate.