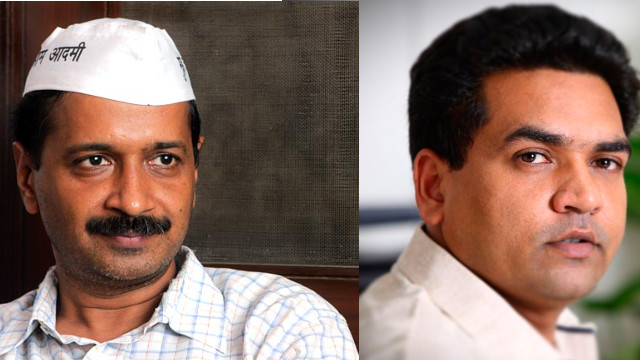 Kapil Mishra is the recent wicket that the Aam Admi Party (AAP) led by Delhi Chief Minister Arvind Kejriwal recently lost in its match against the BJP. Kapil Mishra accused Arvind Kejriwal and Manish Sisodia of indulging in corrupt practices and soon after the accusation, he was thrown out of the party. This in-party turbulence came less than a week after the Kejriwal-Sisodia duo managed to reign in another founding member of the party, Kumar Vishwas, who was taking a step ahead to leave the party and be a part of the BJP following the AAPs defeat in the Delhi municipal election.

Kapil Mishra accidentally joined the AAP, with which he didn’t have any ideological synchronisation at any point of time, but it was the sheer greed of grasping the power that lured him to the camp of Kejriwal, which looked utmost promising as a career development platform between 2013-15 for the new aspirants in politics who didn’t like traversing the lengthy route that the traditional powerhouses like the Congress and the BJP required for the amateurs seeking higher positions, unless they came from well-to-do dynasties.

The Kejriwal camp is trying to brush aside all allegations of corruption levelled against it by the disgruntled leader of the party and the former minister as baseless and as a part of a larger conspiracy of the BJP to dethrone the AAP by engineering an internal coup. However, there is no reluctance in the camp of Kapil Mishra in continuing the fight, as he is throwing all aces hidden under his sleeves before the corporate controlled mainstream media, to earn himself a ticket to Ashoka Road, where the BJP head office is located.

From Somnath Bharti to Kapil Mishra, Arvind Kejriwal-led AAP and its sole government in the semi-state Delhi lost seven key functionaries one by one, who succumbed either to scams and crimes or due to the infighting and factionalism that reigns within the party. The erosion in the AAP camp started as soon as Kejriwal won the second term in 2015 January and faced a strong factional feud with party co-founders like Yogendra Yadav and Prashant Bhushan. The duo and their supporters were thrown out of the party for calling Kejriwal a tyrant and a narcissist. But the house of Kejriwal never remained intact ever after.

The BJP suffered the most humiliating defeat in the hands of the AAP, in January 2015, when the Modi wave was still in the air. Narendra Modi personally campaigned in the Delhi assembly election and the BJP could manage to get only three seats out of 70 in the assembly. The victory of the AAP was possible as the people of the national capital considered it as a party that practices alternative politics, considered it as an ally of the poor and the middle-class and expected it to work extensively to their benefit.

Soon after assuming power, the AAP lost its connection with the people and even ruined its earlier efforts to reach out to the people with alternative political programmes and bringing the people to the political practice. Apart from taking few populist measures like slashing electricity bills of low-end users and reducing water bills, Arvind Kejriwal and the AAP has no more achievements in its kitty that benefitted the poor and the downtrodden.

This apathy towards providing good governance and reluctance in engaging with the people like before clearly showed the people that the AAP is not any better than the Congress or the BJP, but worse. The poor and the downtrodden people have experienced the party’s absolute apathy towards their cause since winning power and the middle-class that once became the backbone of the party, now considers its leadership unhinged and thus switched to the Narendra Modi-led Hindutva camp after they were overwhelmed by the deceitful propaganda of the saffron camp over social media and other platforms.

Arvind Kejriwal-led AAP’s repeated poll debacle is caused by its indecision on core policy matters and its reluctance to disclose its stance on economic policies. Though a vocal critique of the post-modern development model that the World Bank and IMF forced all underdeveloped countries to adopt, the AAP is not clear on what alternative does it have vis-a-vis the predatory economic system that is enforced by the Indian ruling class. As a centre-right party, the AAP is neither able to pursue a total right-wing economic agenda, nor can it throw its hat behind a left-wing and pro-people economic agenda, as the stakes of losing corporate and elite support are high in such adventures.

Being a populist party, the AAP and its government attempt to woo the poor of Delhi, and these poor people are mostly migrants from other places and don’t have voting rights in Delhi. The people who are the major electorates of the city, the Delhites, are by and large middle-class and elites, mostly from upper-caste Hindu backgrounds and due to their privileged position in the society and due to their monopoly control over the economic resources of Delhi, they detest the welfarist and populist policies of secular parties.

These upper-caste elite and upper-middle-class Delhites are strong believers in serving the interest of big corporations and foreign monopoly capital and hate to see that the government spending the money from public exchequer, which they consider exclusively their own money, in the welfare of the toiling people. Kejriwal-led AAP government’s decision to fix a minimum wage for the labour in the city, caused by huge working class movements, won it curses from the elites and the posh colony dwellers, who couldn’t tolerate the wage-labourers demanding more money from them in the enterprises that they run. This also helped the BJP to poach a large-section of the AAP’s vote bank and consolidate its ownership over such class and caste groups.

As the militant Hindutva followers of the city are clinging to the Brahminical ideology served by the RSS with vigour, the AAP lost its battleground to the BJP. The RSS shakhas tried to connect with most upper-caste Hindu localities in the predominantly Brahminical city and engaged the people of these areas in the practice of the Brahminical puritanism and politics of vitriol against the Muslim community. The AAP remained a mute spectator and failed to do anything to prevent the riot-mongers and their followers from the posh localities of Delhi in carrying out hatred-filled propaganda against the Muslim community.

Most of Kejriwal’s team members, including the party supremo himself, are ardent champions of the cause of Brahminical hegemony and they do not have any basic ideological battle with the RSS or the BJP, rather they fight against the Modi regime for more share of power with the Delhi government and alike its counterparts like Mamta Banerjee-led West Bengal government, Naveen Pattnayak-led Odisha government or Nitish Kumar-led Bihar government, it also works hand-in-glove with the Modi government on several issues and extol each other on several occasions, especially those with extreme “patriotic” overtone.

Kapil Mishra used to be one of the fierce Hindutva element in the AAP and he remained committed to the cause of the RSS and spoke in their language. In 2016, Kapil Mishra had verbally abused the Jammu and Kashmir Chief Minister Mehbooba Mufti, accusing her of providing support to Kashmiri separatism. His ardent support for the Indian army’s brutal rule in Kashmir showed the utmost reactionary and pro-military outlook of the AAP and its similarity with the right-wing fascist parties like the BJP and the Congress. As an ardent Brahminical hegemony seeker, Kapil Mishra even upheld the language of the Brahmins, Sanskrit and took his oath in it. Through people like Kapil Mishra, Arvind Kejriwal kept appeasing the upper-caste Hindu elites of the city and tried to peddle AAP’s version of soft Hindutva.

As the Modi government and the BJP led by Amit Shah are determined to install their own government in all states and make India an opposition free country by 2022, the party’s efforts could be seen in kindling flames of contention within the parties and governments led by opposition figures like Kejriwal. Rather than defending themselves from the allegations of corruption and malpractice that Arvind Kejriwal and other opponents raise daily against them, the BJP and RSS has cunningly turned those allegations into laughing stock and by indoctrinating the corporate-dependent Delhites with Hindutva extremism they are swiftly pushing all issues and agenda of the people behind and keeping only the goal of a Brahminical Hindutva kingdom in public.

The utmost failure of the AAP in the last two years to build up any popular anti-Hindutva and anti-BJP political campaign clearly points to the fact that through its type of corporate-friendly populist politics, with only anti-corruption rhetoric as a weapon, a party can sweep power by winning the support of the urban middle-class, but it can neither bring any major change in the politics of the country, nor can it expand its organisational reach to bring down the fascist menace at a national scale. Kejriwal and AAP will continue to bleed due to the poaching exercise that the BJP will carry out apart from the saffron unit’s regular efforts to split the AAP like the AIADMK in Tamil Nadu.

AAP or Arvind Kejriwal, like Congress and Rahul Gandhi or Trinamool Congress and Mamata Banerjee, are not the proper alternative under whom the nation and its people can unite in their quest for bringing down the fascist regime of Modi and his sycophants. The issue needs to be taken up by someone who has a clear political vision, who can purge the filth of Hindutva from the establishment and the system downwards and ensure a free, egalitarian and just society to the people, especially the poor and downtrodden without bothering about appeasing the rich and the middle-class.

Kejriwal and the AAP experience has plummeted and now it’s imperative to build up a real alternative political model, which will not succumb to corporate pressure, rather, will fight the corporate-politician-media nexus in real terms and defeat them with a propulsion of energetic political campaign. The future without such political bloc will be doomed by the rapid growth of Hindutva fascism.