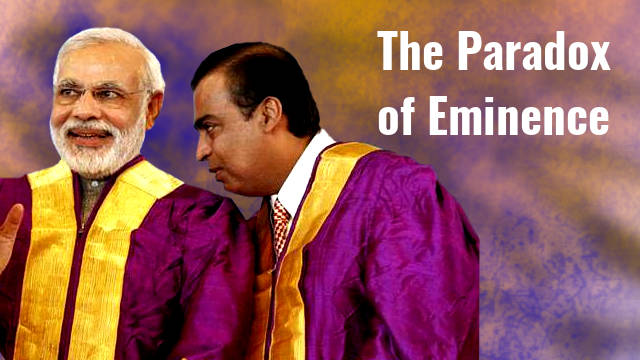 JIO Institute, the proposed higher education institution of the Reliance Foundation, owned by Mukesh Ambani’s wife Nita Ambani, which doesn’t even has a blade full of grass in its kitty, forget a campus or staff, is now granted the prestigious status of “Institute of Eminence” by Modi government’s Ministry of Human Resource Development (HRD). This decision has sparked a controversy all over the country and the BJP and its ideological ringmaster, the RSS, are ardently trying to camouflage what can be called the father of all higher education scams using all sort of favourable propaganda.

This type of titles does have a certain cachet in the world of academics because the government’s funding for them is directly proportional to their ranks and status. With the rank of “Institution of Eminence”, these six private institutions will also get autonomy and unprecedented support and minimal regulation from the government.

As other critical media outlets have already analysed how this paradox of offering a superior status to a non-existent institute, we will not reiterate the same points, rather we will delve into the topic about how, through this “Institution of Eminence” status, the crony capitalist group will eat up further public fund by tweaking laws and by greasing palms, something in which all major comprador and crony capitalists have rich experience in India.

The Modi government is trying to salvage its pitiful condition amidst nationwide mocking and criticism by sending ahead its sycophant bureaucrats to bat for the decision. The Modi regime also defended its decision of granting an “Institute of Eminence” status the non-existent institution by calling it an institute that comes under the “greenfield” status.

This plan also misfired as the HRD ministry amended the rules of selecting “Institute of Eminence” status to institutions that don’t exist under greenfield category only a few days after Nita Ambani declared the intention of the Reliance Foundation to foray into higher education with the JIO Institute. The Reliance Foundation is a CSR initiative of the Reliance Industries, whose owner Mukesh Ambani happens to be a top supporter of Narendra Modi and his regime. The hobnobbing and bonhomie between Narendra Modi and Mukesh Ambani isn’t a news for anyone in India.

Now let’s go on to understand that what “Institution of Eminence” as a tag offers. An Institution of Eminence should offer interdisciplinary courses and conduct research in “areas of emerging technology”. It must have a mix of foreign and Indian students and faculty, with “student amenities comparable with that of globally reputed institutions”. Besides this, the institutions also get unprecedented freedom from the government and greater autonomy in their functioning. Reliance managed all these without even laying the first brick of its institution.

Education in India is always a commodity for those who are on the upper-side of the class-caste hierarchy. Ever since the British colonial rulers established the colonial education system, whose relics are still authoritatively present and dominating our so-called “modern” education system, has functioned with one broad objective – create a pool of trained clerical staff to serve the big corporations, foreign and domestic. Now, in the unchallenged fiefdom of the neo-liberal economy, government spending on education, especially higher education has significantly fallen and the clerical staff vending machine is now tuned to only produce specialist intellectual labour for different branches that support the global imperialist system and its semi-colonial rule over India.

Private entities, especially the big corporations, foreign and domestic, are allowed to play a key role in the country’s crucial higher education sector and sponge away huge profits by tapping the agony of the students who pursue higher education and their parents, especially of the urban middle-class, who would spend their last dime to fund the higher education of their wards, expecting a better career opportunity and a secure future for them, both of which are utopian aspiration in the neo-liberal economic setup. India probably is the only country, where the privately owned schools are called “public schools” and real institutes of higher education, funded by the hard-earned money of the common public, are subjected to harsh treatment by the government itself.

With the status of “Institution of Eminence” granted to the non-existent JIO Institute, the government has cleared the path for the Reliance Foundation to receive future grants and assistance from the government to set-up an institution of repute and then use the same as its strength to take on the public-funded education system and destroy it entirely to make the students seek the assistance of the private institutions for their higher education aspiration. Clearly, the poor, the downtrodden, the marginalised communities will be gradually left behind and the fruits of this “Institution of Eminence” will be enjoyed by the students from the privileged backgrounds only.

India is facing the highest low of its time and the government in power is setting new records of its incompetence. The question, which is significant to ask, is not why the JIO Institute got the eminence status but rather the question here is why other applicants were ignored. What made the government to select the JIO Institute apart from the close sweet relationship that the Reliance Industries and the Modi regime enjoy? It’s not the first time that rules were bent for the Ambanis, throughout its tenure of existence, the government has only taken decisions that would benefit one or the other comprador and crony capitalist group funding the saffron camp.

Proposed institutes like JIO Institute are many in the country and sadly rarely they invest in research. Instead, such institutes are a paradox in the name of education, they are largely teaching shops that glorifies pencil pushers and nothing more. With the total patronage of the Modi government and through channelling the people’s money into its coffer, Reliance’s JIO Institute will definitely emerge the winner in Indian higher education market as well.