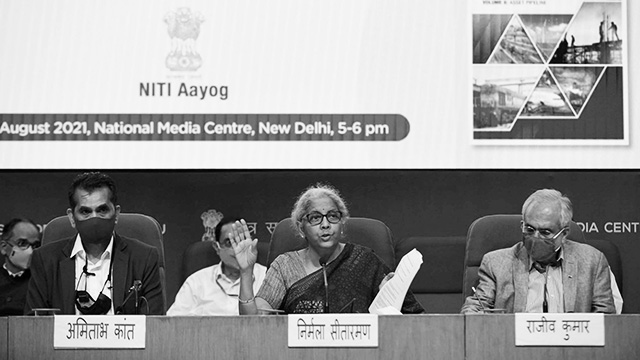 Before launching his ambitious “National Monetisation Pipeline” (NMP)—listing assets across sectors that are to be monetised for an estimated Rs 5.96 trillion over four years—in August 2021, Prime Minister Narendra Modi tried to market the idea in February 2021 as one that will help the poor with schools, hospitals, cooking gas, etc. Once more, the awful din of “Achhe Din” (better days), as promised by Modi during his 2014 election campaign, was played to mesmerise Indian people. But, like all his past fables, Modi’s asset monetisation programme is also obnoxious and will eventually hurt the common people.

It’s not new to anyone that Modi and his far-right, Hindutva fascist, Bharatiya Janata Party (BJP), which enjoys an overwhelming majority in the Indian Parliament’s lower house, the Lok Sabha, have unabashedly followed a corporate appeasement policy and handed over several public assets to a handful of crony-comprador capitalists who sponsor their political ambitions. However, Modi’s asset monetisation programme, the NMP, is far dangerous than the privatisation drive that his government hitherto followed.

Why Modi’s asset monetisation programme or NMP is dangerous?

Modi’s asset monetisation programme proposes to give up a list of public assets to corporate houses on long-term lease agreements, retaining the ownership with the government. Now, these assets will be leased out for a period of 25 to 50 years, however, the government plans to appropriate the lease value at present. In this case, at the end of the lease term, when the corporates return the assets, they will ensure that the assets are fully depreciated to zero value by then so that profit is maximised, and the government will receive a non-performing asset as a liability.

In easy terms, let’s suppose you have an asset, maybe a shop, and you lease it out for 25 years to someone by taking a lump sum amount as rent at the beginning and you don’t get any further earning from it. For these 25 years, irrespective of the market value of the property, the renter will be able to utilise the value of the property to the maximum possible limit and then return it to you by depreciating its value. The onus of repairs, developments and making the shop resaleable after 25 years will be on you, but you didn’t earn anything from it for 24 years.

While by selling the asset, the government could’ve realised its market value, by leasing out it will charge only a fraction of the market value from the leaseholder. However, irrespective of the ownership rights on papers, the leaseholder will use the asset as its owner and maximise profits earned from it by depreciating its value. The government will have to be content with the lumpsum amount it will earn during the leasing. This goes against the public interest, as the people’s assets are handed over with sheer impunity, without their endorsement.

Forget the rosy promises of development of schools, hospitals or roads with the money that the Modi regime plans to earn in four years, according to the Union Budget 2021-22, the Modi regime will have to pay interests worth Rs 8.09 trillion in the current financial year (FY). Interest payment was the highest component in the FY 2020-21; around 20% of the total expenditure of the government was interest payment on debts. What is the economic judgement behind Modi’s asset monetisation programme? How the NMP can help the ailing Indian economy when its assets will be given up at a throwaway price?

Union Finance Minister Nirmala Sitharaman is going to chair a meeting of the Financial Stability and Development Council (FSDC) to nudge the financial regulators so that they can relax investment norms for new instruments like the Infrastructure Investment trusts (InvITs), which will be used for Modi’s asset monetisation programme.

The SEBI has recently reduced the minimum investment amount for InvITs and Real Estate Investment Trusts (REITs) to Rs 10,000-15,000. The IRDA has allowed insurance companies exposure to InvITs and REITs up to 3% of their fund size or 5% of the units issued by a single trust, whichever is lower. The SEBI has allowed the mutual fund companies to invest up to 10% of their assets in single InvITs or REITs. However, this won’t bring forth diverse investments or inspire retail investors. Rather, it’s the RBI’s relaxations, mostly in terms of non-performing assets for public sector banks (PSBs), which can help Modi’s sponsors to gain access to the assets.

If the corporates get access to more loans from the PSBs, in case the RBI lowers its guard following the Modi regime’s muscle-flexing, it will ensure that the public money will be used by the corporates to lease the public assets and then depreciate those assets over a long period. How does that Rs 5.96 trillion, taken from PSBs, help the government in running the house? In this circular movement of money, without any substantial value addition, who will benefit if not the corporates?

Moreover, as Modi’s asset monetisation programme heavily depends on using brownfield resources, like coal, there will be hardly any major foreign corporate involvement as association with such projects will harm their carbon reduction commitment. In that case, a handful of crony-comprador capitalists, who sponsor Modi and his BJP, will monopolise the control over such public assets, using public money. What will be the government’s profit from such a scheme? It will only dupe the people and transfer the ownership of their assets to big capitalists without their consent.

Privatisation can’t be a solution to India’s economic woes

This article shows why the rapid privatisation of Indian public sector enterprises won’t help the Indian capitalists or the government. Prime Minister Modi’s asset monetisation programme is all about enriching the big corporates in extracting profits from the resources that were built using people’s hard-earned money for over seven decades. The depreciation of the assets, which will put the onus of making them leasable on the government and the plan of the latter to appropriate the lease amount in one go, as upfront, will be recorded as one of the world’s most obnoxious economic policies.

The money from the leasing, which will mostly come from the PSBs where the Central Government infuses capital every few years, will not create jobs for the youth, will not provide subsidies for cooking gas, won’t lower fuel prices and won’t build universal access to quality education and healthcare through public funding. Rather, this money will be spent on meeting the government’s current expenses and interest repayment on borrowings.

It’s noteworthy that the Modi regime allocated Rs 4.78 trillion for defence and Rs 1.66 trillion for home ministry (police and security) vis-à-vis Rs 932.24bn for education and Rs 739.32bn for healthcare in the Union Budget 2021-22. The same government won’t change the equation under any circumstances.

In the end, with Modi’s asset monetisation programme—the NMP—India will lose its public assets and over the years, the government will lose out revenue. In the FY 2019-20, the Union government earned Rs 1.86 trillion from dividends and profits and in the Union Budget 2021-22, the estimate for the current FY is Rs 1.03 trillion. With lease out of core assets, there will be a significant drop in this revenue, which shall be foregone for at least 21 years. India’s economy will also enter its utmost tragic phase.