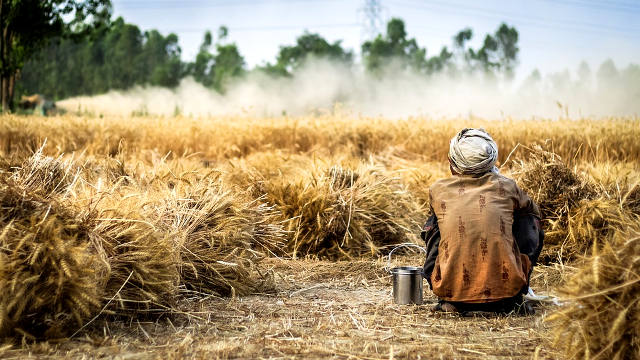 Since 2014, the BJP is continuously drumming its commitment towards the cause of the farmers, while on each occasion, be it in Madhya Pradesh or in Rajasthan, it didn’t blink before using batons and bullets to deal with agitating farmers. Now, when 30,000 farmers marched under the banner of Bharatiya Kisan Union to the national capital as a part of their “Kisan Kranti Padyatra”, which started from Haridwar on 23 September and was scheduled to reach Kisan Ghat, the memorial of former prime minister Chaudhary Charan Singh, they were welcomed by the Modi regime at the Ghazipur border with batons, teargas shells and water cannons.

Under the direction of the Modi regime’s Home Ministry, whose head Rajnath Singh was meeting the farmers’ delegation along with the Sugarcane Minister and Dairy Minister of Uttar Pradesh, the police brutally assaulted the agitating farmers and beat them up until they started bleeding profusely. Policemen were heard hurling abuses at the farmers while hitting them and blaming them for disuniting “Hindus” by “daring to march” against the Modi regime. Farmers, with torn clothes soaked in blood, became the optics of the Kisan Kranti Padyatra and infused a new wave of farmer arousal throughout North India against the Modi regime.

Ironically, the police violence against the unarmed farmers took place on the birth anniversary of Mohandas Karamchand Gandhi (again ironically killed by the RSS), which is celebrated as “International non-violence day”. While Narendra Modi was praising MK Gandhi with the objective of increasing his own PR quotient, his policemen were committing gory atrocities against the farmers who marched to the capital city demanding their rightful dues from a government that’s elected by them. Irony certainly died a painful death on 2 October 2018.

This increasing reliance on state violence as a weapon to deal with mass movements show that the Indian ruling classes are quagmired in a deep crisis. They are unable to resolve their crisis in a peaceful way and that’s the reason they are increasingly adopting violent methods to suppress dissent and curb people’s movement. As the farmers are asserting their rights and not getting swayed by the communal cajoling by the Modi regime, the corporate-lackey government is finding itself in deep trouble. To come out of this trouble, state-sponsored violence is the only rescue.

By hitting out at the farmers, the Modi regime has shown its absolutely anti-farmer character, which will have implications during the 2019 elections as the BKU consists of rich, middle and poor farmers from politically volatile western Uttar Pradesh. The RSS had earlier cracked the unity of the farmers of western Uttar Pradesh in 2013 by polarising a large-section of Jats under the Hindutva fold. Over the years, the Jat farmers have felt the pinch of Modi’s economic policies and have collectively hit back at the BJP during the recent Lok Sabha bypoll. A lethal unity of Jats, Muslims, Gujjars and other farming communities in western Uttar Pradesh is underway now and through these type of movements, the communal unity gets cemented strongly.

With the growing discontent among the farming communities, who have experienced government indifference to their problems irrespective of the hue of those in power, the days ahead will experience severe farmer movements for their due rights. At a time when the neo-liberal economy is choking to death the poor of the country, the farmers are at the front row of death due to the dual attack of mounting debts and lower returns on farming. The day they will surmount the police barricades, surviving the batons and bullets of the regime, the doom of the empire built by the Indian rich by sucking the blood of the poor will collapse like a house of cards. By hitting out at farmers today, Narendra Modi just paved the way for that inevitable future.