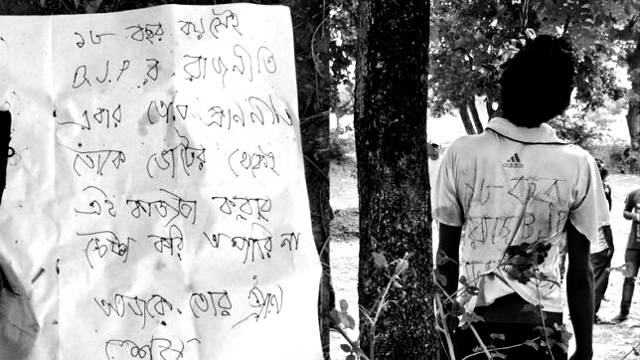 Two BJP workers have been murdered in Purulia district of West Bengal in the last one week and their bodies were recovered hanging. During the recently held Panchayat election, the BJP wrested the lion’s share of Gram Panchayat seats from the ruling Trinamool Congress in Purulia and has turned the Maoist-influenced district into its electoral bastion. Amidst this assertion of its new-found power in the district, the BJP has stirred up strong political unrest over the mysterious murder of its activists and even the party president spoke on the issue, taking a jibe at the Mamata Banerjee-led state government.

While 18-year-old Trilochan Mahato (18) was found hanging from a tree a few days ago, with a Bengali note telling that he is killed for daring to work for the BJP, the second victim, Dulal Kumar (32), was found hanging from an electric pole in a field within few days of Mahato’s murder. The state government has passed on the investigation to the state CID and the BJP is accusing the ruling party of this violent backlash as it has lost Purulia. The police claimed that Kumar committed suicide as per the autopsy report, while the BJP is denying the findings.

The local BJP leaders of Purulia and West Bengal, including the former BJP chief of the state, Rahul Sinha, had been found constantly giving bytes to the corporate-controlled media outlets in broken Hindi, in their desperate attempt to instigate a propaganda that the BJP is a victim in West Bengal and no political party is coming in rescue of the Hindutva fascist force even when its Dalit and tribal workers are killed. Babul Supriyo, the notorious MP of the BJP and a Union Minister, who played a crucial role in instigating the Asansol riots in March, kept blaming the left and democratic forces for ignoring the BJP, whose men, he said, mostly come from the Dalit and tribal background and are killed brutally in West Bengal and Kerala.

Balrampur of Purulia is a Maoist-influenced area and a former stronghold of the CPI(Maoist) when the outfit had a strong presence in the nearby Ayodhya Hills. The ruling Trinamool Congress once aligned with the CPI(Maoist) during the last leg of the CPI(M)-led Left Front government and had the Maoists eliminate crucial CPI(M) workers and organisers in this tribal belt.

In the recent years, the BJP has gained immense strength in rural West Bengal by portraying itself as the only strong and capable opposition party that can resist the violent Trinamool Congress. The BJP has filled the space vacuumed by the ailing Left Front, the Maoists and the Congress, which officially became the principal opposition party but has no organisational base in the state anymore.

With the Maoists gone, the Trinamool Congress had to fight the BJP on its own to retain its political dominance over Purulia. Most of the former CPI(M) and the Congress workers joined the ranks of the RSS and the VHP to strengthen the BJP. A former SFI leader, Gaurab Singh, rose to become the chief of Bajrang Dal in Purulia and started inciting Islamophobia in the district, where communal riots were unheard of since ages.

Recently, Gaurab Singh was arrested by the state government but he is not charged for the severe crimes he has committed, including the communal violence that the Bajrang Dal and the RSS activists unleashed on the Muslims of Purulia town and in nearby areas on the occasion of Ram Navami celebration, an alien culture to Purulia. One Muslim man was killed by the men of Gaurab Singh during the Ram Navami terror attack by the Hindutva camp.

While Purulia was slowly set on fire by the likes of Gaurab Singh and the RSS affiliates, the state administration remained a mute spectator. This fascist nincompoop Gaurab Singh kept spreading communal vitriol using different social media platforms, against which Mamata Banerjee or her government’s “pro-active” police took no action. He was later arrested to protect him from the ire of the people who are visibly angry with the criminals of the RSS-affiliated organisations since the Panchayat poll results were out.

The victory of the BJP in the Panchayat election in Purulia and the complete routing of the ruling TMC now indicate that the “social engineering” done through the communal polarisation has worked for the BJP initially. Now that the party has seized control of most of the Gram Panchayats, the party leadership is scared of the TMC poaching their men or using the bullying tactics that the ruling party employed to turn most of the Gram Panchayats, Panchayat Samitis and Zila Parishads into the ruling party’s fold between 2014-2016.

The mastermind of that intimidating conversion of 2014-16, Mukul Roy, is now a part of the BJP and upon his advise, the party took out many militant attacks against the TMC workers and their offices, wherever it could, since winning the election, to keep its aggressiveness on in the post-poll scenario and thereby keep the TMC away from its territory.

Now, suddenly the death of two young activists of the BJP, in a signature fashion, points toward a greater conspiracy. The BJP lost two men within a week and it blamed the ruling party immediately. Not only the local leaders but people like BJP President Amit Shah and other central leaders seized the opportunity to fire their verbal volley against the West Bengal government.

It’s true that the death of strategic party workers due to opposition attack causes severe loss to political parties, but these two BJP workers, who died in Purulia were not in such important positions of the Sangh Parivar that their killing would send panic waves to the saffron camp up to the top level, when the BJP doesn’t care about its grassroots party workers in the states ruled by it. Then why the BJP made a big issue on their death and accused the government of being complicit in the crime instantly?  Isn’t the BJP seizing the opportunity of an anti-incumbency wave flowing throughout rural West Bengal after the severe violence unleashed by the ruling party to win the Panchayat election, to score brownies for itself?

It’s also evident that the ruling TMC, which is infamous for openly killing its opponents in broad daylight, would not take so much trouble to abduct people, make them call  home frantically (Trilochan Mahato called his home, as per his brother’s testimony to the police and said some people have abducted him) seeking help before killing them in a dramatic way with a more dramatic message written, in a rookie-fashioned way, for the press and the police to ensure that the TMC can be blamed immediately after the body is discovered. The TMC could have killed the duo in broad daylight or at their home by employing the infamous “Harmad” mercenaries on the payroll of the party and those expert killers wouldn’t do much drama to kill someone.

The Maoists used to send a message, while killing political opponents, especially the CPI(M) workers in West Midnapore and Purulia district, during their heydays in the region. However, such announcements were signed with the party’s name at the bottom, as the organisation doesn’t care about the norms of legality because it’s already a banned organisation. In case it had to kill the BJP men, it would have shot them and given the message of their existence in the region, which would have sent a more shrilling message up to Delhi. The Maoists would not do such blunder and miss the chance of propaganda when the enemy is the BJP, with which it’s fighting in more than five states of India.

So, if we simply turn the needle of suspicion towards the BJP, then a Pandora’s box may open in front of us. The RSS and the BJP are infamous for political assassinations in their quest for power. From Deen Dayal Upadhyay to Haren Pandya, from Pramod Mahajan to Gopinath Munde, the saffron camp has seen a lot of bloodshed in the internal feud for power. The killing of politically insignificant workers to score brownies is a very easy job for the RSS, which has specially trained killers everywhere it operates.

Killing Trilochan Mahato ( a tribal) and Dulal Kumar (Dalit) is quite an easy and profitable job for the BJP, as the saffron camp can use their dead bodies to corner the ruling party politically, show that the state of law and order in West Bengal is at the nadir and also project itself as a party victim of caste violence, before the tribal and Dalits of West Bengal and other states as well. It’s imperative for the BJP that it polarises the Dalits and tribals of India before the 2019 general election and in a state like West Bengal, this is unavoidable.

It’s important for the saffron camp to project itself as a victim of caste violence to wean away the Dalit and tribal voters at a time when the BJP and its feudal Thakur supporters are on one hand trying to drive away the Dalits from Saharanpur, where the Dalits are resisting against the upper-caste oppression by forming the Bhim Army, while on the other hand, the BJP-led governments of Chhattisgarh, Jharkhand and Maharashtra are carrying out a brutal war against the tribal people, who are resisting corporate aggression on their land, forests and rivers. The BJP won’t stop these oppressions, but outside the war zone where it’s fighting for Brahmanical hegemonic fascism, it’s trying to do an image makeover and win as many supporters among the oppressed Dalit and tribal community.

It’s foolish to believe that the state CID will investigate these two deaths correctly and objectively because it will only try to do a monkey-balance for both the ruling TMC and the BJP. There are chances that the CID investigation may point its finger towards the Maoist or the CPI(M), accusing them of complicity in the crime and thereby whitewash the image of the saffron camp in the region while providing the state government with an excellent opportunity to save its face and prevent a disaster.

What will happen in the future can’t be predicted now; however, one thing is clear -these deaths in Purulia may not be the last BJP workers. If the death of its party workers can pay a rich dividend in electoral and social-engineering terms, then the BJP will be quite happy to oblige. It had its men killed in riots, in Godhra and in different occasions, where the RSS’ “nationalist agenda” required scapegoats. For West Bengal, which is its latest Hindutva laboratory, the RSS will certainly ensure that it puts more people, from its own ranks to death, in order to reap greater benefits and emotional support from the marginalised people. It’s high time that their heinous conspiracies are exposed to the target communities and its plot to trigger several large-scale anti-Muslim pogroms in West Bengal, is thwarted well in advance.