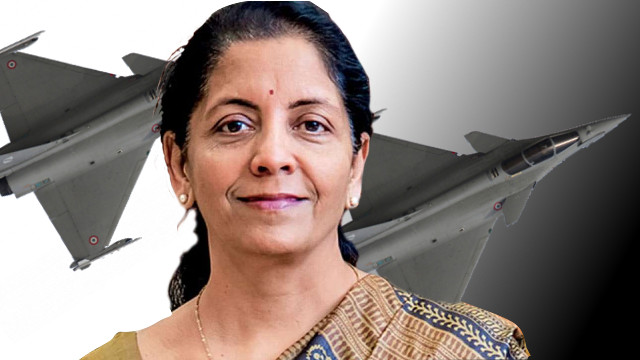 Defence Minister Nirmala Sitharaman rushed to France soon after the Supreme Court ordered the Modi regime to present details of its decision-making process regarding the multi-billion rupees Rafale Jet deal. Serious allegations of a gigantic scam, which also jeopardises India’s national security, are levelled against the Modi regime over its dubious role in modifying the crucial deal of acquiring the multi-role combat aircraft (MRCA) Rafale Jet for the Indian Air Force. The Supreme Court’s order comes as a setback for the Modi regime, which is trying every possible trick to sweep the allegations of corruption and exposures of the Rafale Jet scam beneath the carpet in a crucial election year.

The Congress President Rahul Gandhi and the critics of the Modi regime are alleging, quite rightly, that the sudden visit of Nirmala Sitharaman to France is not merely a coincidence, rather a calculated and frantic step taken by the Modi regime and the RSS to do some damage control for itself and Anil Ambani, whose company Reliance Defence, then only a 12-day-old firm, was awarded the Rafale Jet maintenance deal with sheer impunity, even at the cost of dropping the renowned public sector company Hindustan Aeronautics Limited (HAL) from the deal, which caused huge loss to the public exchequer.

Rahul Gandhi tweeted that a #GreatRafaleCoverUp exercise has begun, which propelled the sudden France visit by the Defence Minister and her sycophants. According to Rahul Gandhi and the entire opposition, the Modi regime, the French government under Emmanuel Macron, the Dassault Aviation and the Reliance Defence of Anil Ambani are botching up a common strategy to deal with the corruption charges over the Rafale Jet scam and save each other by spinning a common story through the mainstream media outlets, which they can back up by using forged documents, minutes and statements as evidence.

It’s to coordinate the activities of all stakeholders of the Rafale Jet scam and to sync their story, counter-propaganda and strategy to safeguard the Modi regime and its big donors like the Reliance group, that Nirmala Sitharaman is in France and having a dialogue with her French counterpart Florence Parly. Amid the uproar over her France visit, Nirmala Sitharaman visited the Rafale facility of Dassault Aviation to show the Modi regime’s determination and audacity to push the deal that will benefit Anil Ambani immensely.

The #GreatRafaleCoverUp has begun. To try and show the deal is legit, Raksha Mantri will need to generate minutes of imaginary meetings held between the French & our MOD & both sides will need to agree on a common story to be spun to the media.

Despite her discussions with Florence Parly and other important members of the French establishment, Nirmala Sitharaman will not be able to find a face-saving pitch for the Modi regime in France because the inner contradiction within the French ruling classes, the contradiction between Dassault Aviation and other global aviation players eyeing the Indian defence market, especially in the MRCA segment, will help crack the pot everytime the conspirators fix it. The contradiction within the French ruling classes has already wreaked havoc for Emmanuel Macron and his government, as more details are leaked by members of the ruling elite every day to the press.

Recently, former French President François Hollande revealed how the Modi regime was complicit in pushing Anil Ambani’s Reliance Defence into the Rafale Jet deal, replacing HAL. This revelation is now also confirmed in an exposure by French investigative website Mediapart, which accessed confidential documents of Dassault that describe how the Modi regime made it “mandatory” for the French company to tie up with Reliance Defence in order to bag the order of the MRCAs and enter the lucrative Indian defence market. Though Emmanuel Macron is trying to defend Narendra Modi, along with the Dassault Aviation management for the great share of booty his establishment (which was once meant to benefit François Hollande)will get if the deal that will enrich Anil Ambani is materialised. It looks impossible that Emmanuel Macron’s government can survive by justifying corruption at a time when the French working class is brewing in anger and the common people are totally discontented with the economic crisis that France is going through since years.

It must be remembered that soon after coming to power, Narendra Modi allowed 100 per cent FDI in the defence sector and allowed the private sector to play a greater role in the domain, which remained under state monopoly for many decades. This extreme urge to see the private firms and foreign capital profiteer from the Indian defence industry, which is a lucrative sector due to the incessant demand in India for military hardware in view of the persisting military tension between India and its neighbours, especially Pakistan and China, and the intensification of internal rebellion in Kashmir, Chhattisgarh, Manipur, etc., shows how for the sake of trickled down commission, the Modi regime didn’t bother at all about national security of the country, over which the Eminence Grises of the Sangh Parivar would deliver kilometre-long emotive and extremely chauvinistic speeches. It proves beyond doubt that the pathologically pervert “nationalist” ideology of the Sangh Parivar is actually a vessel to help its big corporate donors survive on the heap of cronyism.

Ever since the Rafale Jet scam was exposed and media reports nailed Anil Ambani’s novice firm Reliance Defence, which bagged a multi-billion rupees deal of maintaining military aircraft despite never building even a toy jet of its own, the Modi regime, Dassault Aviation and Anil Ambani have been desperate to prove themselves innocent.

Anil Ambani filed a defamation case against the Congress-run National Herald newspaper, while the Modi regime forced the entire military brass, the defence ministry officials, bureaucrats and BJP spokespersons to bat for the government’s standpoint that deprives a public sector company to enrich a crony capitalist. Dassault Aviation kept murmuring its own, often self-contradictory, statements and the French government kept reiterating that the deal is clean and a “win-win” one to counter allegations of corruption.

Despite this boisterous propaganda to counter all allegations, the Modi regime and the Hindutva fascist RSS-BJP are unable to rebuild the “patriotic” and “uncorrupt” image of Narendra Modi, which they used to sail through the 2014 general election. This is indeed bad news for the government, which is all set to face the voters in 2019, apparently for the last time before it transforms India into an official Hindutva fascist monarchy by 2022.

Nirmala Sitharaman is thus, as it appears from her sudden flight to Paris, under pressure from the Modi regime to clean the trails of the scam and bring up new, forged evidence in support of the Modi regime’s version of the story, which still has no strong logical argument to answer – why an experienced public sector company like HAL, chosen by the former UPA government for building and maintaining Rafale Jets, was replaced and a novice agency like Reliance Defence was introduced in the crucial deal? She is trying to seek help from all quarters to build up a story that can seal the loopholes, including the inclusion of Anil Ambani’s Reliance Defence in the deal and the highly-priced ready-to-fly jets instead of manufacturing them in India.

A thorough, impartial and brave investigation into the entire Rafale Jet scam can unearth and uncover many cans full of worms, however, the chance of such a special and independent investigation is quite thin in Modi-fied India, where all institutions are saffronised by the men of the RSS, and sycophants of Narendra Modi and Amit Shah are perched atop each institution that the people are taught to respect and obey. The Rafale Jet scam has the potential to bring down the edifice of the Hindutva fascist regime that the Modi-led dispensation has been building since last few years. Thus, Narendra Modi and his cohorts are quite scared of the scam and the mention of it. It’s trying to intimidate all independent or critical media houses that are publicising the stories of the scam and trying hard to maintain its “holier than thou” image among its hyper-chauvinist support base.

These attempts by the Modi regime, the Reliance Defence of Anil Ambani, the Dassault Aviation and the French government can’t alter the facts and push out the story of Rafale Jet scam unless a bigger replacement can be brought, which can be something like a border skirmish with a neighbouring country like Pakistan. Nirmala Sitharaman can introduce a concocted tale over the Rafale Jet scam, but she and the Modi regime can’t preserve themselves with such deceitful propaganda because the majority of the poor and the lower middle-class, who have suffered the most under this regime, will refuse to believe them and buy the propaganda. Hindutva fascism, cow terrorism, bigotry and patriarchal supremacy can sell in India like hot cake, but as a bad news to the RSS, the sheer unapologetic corruption of the Modi regime over national security will even irk a large chunk of its upper-caste Hindu supporters, which can be lethal a year before the election.

If the Modi regime is encircled with determination and perseverance by the opposition forces, by the common people who are suffering due to its policies and notorious agenda, by using the Rafale Jet scam and the subsequent effort to enrich one of the most dubious crony capitalists in India, Anil Ambani, who may be trying to flee India to escape payment of dues to a major global corporation, will not let the BJP get a leeway with aplomb. There are accounts that the Modi regime should clear, there are dues it must repay and there is a massive public wrath, larger in volume than the Rafale Jet scam, which Narendra Modi, the BJP, the RSS and its offshoot Hindutva fascist organisations should face before they’re cast to the Indian Ocean by high tides of people’s movement in India. Nirmala Sitharaman’s repeated visits to France can’t prevent the inevitable anyways and their doom is the “inevitable”.