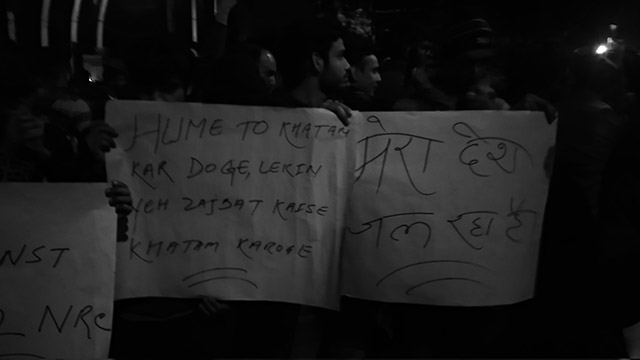 There is an absolute silence in the mainstream press as the Bharatiya Janata Party (BJP)-led Uttar Pradesh government has unleashed a severe reign of terror against the Muslims in different parts of the state, following the “we will avenge” rhetoric of Ajay Singh Bisht aka Yogi Adityanath, the chief minister of the state. Under Adityanath’s command, the state police and the infamous Provincial Armed Constabulary (PAC) personnel are randomly arresting Muslims, seizing or sealing their properties and helping the cadre of the BJP and its parent body Rashtriya Swayamasevak Sangh (RSS) to launch communal pogroms in Bijnor, Old Lucknow, Kanpur, Muzaffarnagar, Meerut, etc. There have been 17 deaths reported so far, caused due to indiscriminate police firing and there are unconfirmed reports of more than 25 deaths, including an eight-year-old and one 12-year-old child.

The Muslims have been protesting all over India against the National Register of Citizens (NRC) and the Citizenship (Amendment) Act, 2019 (CAA). Sporadic incidents of violence were reported from Muslim rallies against the NRC and the CAA in the BJP-ruled Uttar Pradesh and Karnataka. Police atrocities against Muslims in these states have reached the peak, as the BJP is attempting to polarise the upper-caste Hindu elites, middle class and a section of the backward caste Hindus using the optics of violence in Muslim rallies. The Delhi Police, controlled by Union Home Minister Amit Shah, is also complicit in firing on protesters, attacking Muslim ghettos and torturing those it arbitrarily arrested for the violence, which was caused by the RSS elements who were deployed in the rallies as agent provocateurs by the ruling clique in cahoots with the Ministry of Home Affairs.

Uttar Pradesh DGP OP Singh told the press on Friday, 20 December 2019, that five people had died due to the violence that followed during the massive rallies held all over the state, and denied that the police had fired on the protesters. However, the eyewitnesses have accused the police of firing at protesters and even bystanders, like Mohammad Wakeel (32) who was killed on Thursday due to bullet injury during the violence in Lucknow’s Aminabad area. Police firing allegedly killed Anas (21) and Suleiman (20) in Nehtaur of Bijnor. There are more reports of police firing killing protesters pouring in, and a large number of videos are showing how the police had resorted to macabre atrocities against protesters throughout Uttar Pradesh.

There are unconfirmed reports of the RSS men Vikas Jalan and Satya Prakash were seen in the mob that was damaging properties in Gorakhpur on Friday. At many places, like Kanpur, Ghazipur, etc, the local Muslims complained that the policemen were acting in cahoots with the Hindu Yuva Vahini, a notorious outfit of Adityanath, and the RSS’s men. In Muslim-majority Old Lucknow, especially in Aminabad, the local people have been complaining of police vandalism and atrocities as the forces are ransacking houses, arresting and torturing young men, molesting Muslim women and hitting the Muslim elders to strike terror in the hearts of the people. A large number of Muslim youth aren’t able to venture out of their houses and are unsure whether they can go to their work or for studies from Monday, 23 December 2019, onwards.

This new lease of state-violence against the Muslims in Uttar Pradesh is carried out in a phased manner under a well-planned scheme of the RSS-led Sangh Parivar. There was a scheme to flare up violence throughout the state, using the Muslim protests against the anti-people NRC and CAA as subterfuges. The RSS men were planted in all major rallies in the BJP-ruled states and they put buses, cars and public property on fire to pave the way for police atrocities on Muslims. The opportunity was used by the BJP to stoke communal passion among its feral support base and incite hatred against the Muslim community that’s at the verge of losing its citizenship status under the NRC and the CAA. Chief Minister Adityanath is managing the entire affair of this communal conflagration and using the opportunity to strengthen his claim on the prime minister’s seat in the near future.

Adityanath, the bell-ringing-monk of a Hindu mutt who became a notorious communal rabble-rouser and a riot-monger, was picked as the chief minister by Shah after the BJP swept the assembly elections in 2017. Unlike other top BJP leaders from the state, including Defence Minister Rajnath Singh, Adityanath didn’t have any administrative experience, except running a mutt and a vigilante militia. Picking him up to run a crucial state – and the largest one of India – was not a gamble, as most Gadflies of the regime would make people believe. It was part of a scheme where the state’s Muslims that the government will derive sadist pleasure from their agony.

Following the 2002 Gujarat pogrom’s model, in which Prime Minister Narendra Modi was a perpetrator according to several eyewitnesses and opposition politicians, the Adityanath-led regime is using the sporadic violence on street, which was instigated by RSS men, to blame the Muslims of anarchy and to justify brutal persecution of the community. A witchhunt is on throughout the state, and the gross human rights violations, following the Kashmir model, is going on. The Muslims are rounded up, arrested without charges and many of their properties are illegally sealed, only to be passed on to Hindutva fascists later, and the courts have turned blind to the injustices done to the Muslims of Uttar Pradesh.

While the 2002 Gujarat pogrom was a state-sponsored one, which was executed by the RSS-affiliated terrorist outfits, the 2019 Uttar Pradesh pogrom is one done by the state government with utmost support from the RSS and the Union government. The Modi regime is helping the Adityanath regime to unleash violence on the Muslims and its propaganda channels are amplifying the state violence as a counter-measure to arrest violence and vandalism by Muslims. A political family that survived on sheer communal violence since its inception to remain politically relevant and to expand its reach, is now teaching the people, especially the marginalised and oppressed Muslims, the need to maintain peace and order in the most chaotic hours of the nation’s existence. This is hypocrisy at its highest level, and Adityanath’s coterie is unapologetic about such hypocrisy.

A fit of nationwide anger is simmering against the atrocities of the Adityanath regime and there is no way it can immunise itself from the massive outrage of the Muslims, supported by a large section of Dalits and marginalised people in Uttar Pradesh. Even if it starts a state-sponsored pogrom, the resistance struggle against the BJP in other parts of the country, the people’s movements on the streets will push it towards its total collapse. There is no way the Modi regime can redo a 2002 Gujarat or a 2013 Muzaffarnagar throughout Uttar Pradesh, as unlike the past, when the Muslim community and the secular forces cocooned, this time there will be no dearth of people on the streets, stories throughout the world and resistance to beat down the fascist empire of the Hindutva camp. As his regime’s end has begun, what Adityanath can do best with his bigoted half-baked mind is provoke riots, communal carnages and genocides. However, if he thinks he and the BJP can get away with such crimes then it’s a sheer fool’s paradise where he is building his castle now.