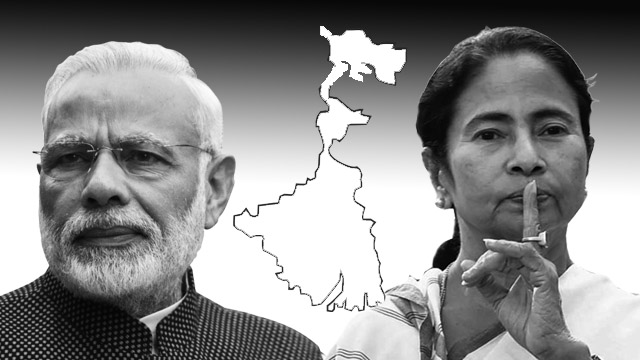 Prime Minister Narendra Modi’s Bharatiya Janata Party (BJP) has been eyeing West Bengal for a long time. Never before in its history, the Hindutva fascist party came so close to seizing power in the state. With 18 out of 42 members of Parliaments (MPs) from the state, the BJP is the only close competitor of the ruling but ailing Trinamool Congress (TMC) of Chief Minister Mamata Banerjee. To achieve this mission, Modi’s dirty politics over West Bengal has reached a new low during the nationwide lockdown to curb the COVID-19 pandemic.

As the BJP is aiming to dislodge Banerjee’s government in the 2021 assembly election, it’s not leaving any chance to cause ignominy for the state government. For days, no migrant labourers were sent to West Bengal through the “Shramik Special” (workers’ special) trains, for which the state government was blamed. The BJP-ruled Union government said that West Bengal didn’t ask for trains to ferry the state’s workers stranded in other states.

As per the Ministry of Home Affairs’ (MHA) guidelines issued through circular no 40-3/2020-DM-I (A) dated April 29th 2020, permission was granted for the first time for the inter-state movement of labourers, pilgrims and students stranded due to the lockdown from the first week of May. It was only then that the Government of West Bengal came to know about the directives of the MHA.

This means the originating states, in West Bengal’s case states like Maharashtra, Delhi, Gujarat, Karnataka, etc, were responsible for sending the list of workers stranded in their states to the Government of West Bengal. Banerjee’s administration won’t know where all the “migrant workers” are in other states. It was possible for the originating states only to know about their whereabouts. But they didn’t send any proper list to the state government, which caused severe confusion and caused trouble for the stranded “migrant workers”.

But the BJP bashed Banerjee’s government incessantly for failing to bring the workers back. The Modi regime, which arbitrarily declared the lockdown, and the BJP, whose governments in states like Gujarat, Karnataka, Madhya Pradesh and Uttar Pradesh unleashed a barbaric assault on the poor “migrant workers” walking for hundreds of miles to reach their native places, blamed the TMC-led government for not helping the “migrant workers” to return. New Delhi charged West Bengal for all the crisis and accused it of being “inhuman” while perching on the corpse of starving workers.

When Banerjee started accepting the labourers, who were sent to home quarantine if they were asymptomatic, the BJP created ruckus in the villages by instigating mob violence against those who returned. It started a new lease of socio-economic ostracisation of these poor people in their villages. At many places, the “migrant workers” have been forced to live outside the villages for days.

After Banerjee’s government started accepting the “migrant workers”, it was found that the originating states, especially Gujarat, Karnataka and Maharashtra, were sending trains full of COVID-19 positive migrant workers, who also contaminated their co-passengers, creating an excessive burden on West Bengal. Though the norm is to check each passenger before boarding a “Shramik Special” train, these faux passes proved that there was a layered conspiracy to place West Bengal among the worst-hit states like Delhi, Gujarat and Maharashtra.

As the Modi regime and the BJP have been cornered over the failures of the Gujarat government in curbing the COVID-19 menace and treating the patients due to a dilapidated public healthcare system, thanks to Modi’s 12-year-long rule as a chief minister and the BJP’s emphasis on helping corporate-controlled healthcare sector over public healthcare system, it’s convenient for the ruling party to pass the buck on opposition parties by increasing the number of positive cases in those states as well.

This was the sole reason that the Modi regime deliberately pushed a large number of “migrant workers” to West Bengal showing urgency while remaining nonchalant to their plight when they have been walking for thousands of miles to their villages. Even the reason that a central team was sent to West Bengal in April, to uncover more COVID-19 cases and to mill a misinformation campaign against Banerjee’s government, was to bring the state at par with Gujarat in the number of rising cases.

After the Amphan super-cyclone ravaged North and South 24 Parganas, and Purba Medinipur districts of West Bengal, apart from parts of Purba Bardhaman and Hooghly on May 20th, Modi remained mum for a whole day and then tweeted to exhibit his sudden-found sympathy for the people who suffered the disaster. He visited West Bengal for joint aerial survey of the affected areas with Banerjee on May 22nd. After the survey, he met the government officials at Basirhat College and discussed the losses.

Banerjee’s administration submitted an estimated Rs 1 trillion-worth losses. Modi said he will see to it and declared his government will release Rs 10 billion as interim relief for West Bengal. Though it’s “interim” and not the final package, an amount of Rs 10 billion is like a humiliating mockery of one’s agony when there are losses worth Rs 1 trillion.

Ironically, as per West Bengal Finance Minister Amit Mitra, the Union government has not paid Rs 504.86 billion due to the state. This implies that any package for the Amphan super-cyclone relief can’t be less than Rs 1.50 trillion. So, now the Modi regime must pay Rs 1.49 trillion more to West Bengal for the Amphan. No amount less than that is a relief for West Bengal but an insult.

Since Wednesday, May 20th, when Amphan super-cyclone ravaged the state and destroyed a large part of it, the BJP has launched an insidious campaign exploiting the vulnerabilities exposed by Banerjee’s government’s disarrayed state.

Firstly, soon after the Amphan super-cyclone, the BJP turned the limelight on the destructions in Kolkata and its outskirts, leaving the poor of the rural areas to lurch in darkness. A Kolkata-only approach deprived the rural areas of timely help and relief operations and it’s not clear how long will it take for the state government to fix things in the worst-affected areas, especially in the Sundarbans area.

Secondly, its men attacked the relief and restoration workers who went to different parts of Kolkata to clear trees and debris. The BJP also launched a synchronised attack on electricity workers at different places.

Thirdly, to stop the swift movement of the relief and restoration teams, the BJP created roadblocks by instigating elites and upper-middle classes in different posh localities of Kolkata, and created chaos by making everyone demand that the power connection and other works are done in their locality first, triggering violence between neighbours.

Apart from this, in Titagarh area of North 24 Parganas, the BJP men attacked the workers trying to restore electricity and other services. The BJP men rampaged on the streets and even burned down a truck. They also tried to incite communal violence.

Modi’s dirty politics didn’t end with sabotages on COVID-19 and Amphan only. On May 12th, hundreds of Hindutva fascist thugs reached Hooghly district’s Telenipara from Barrackpore in dinghy boats to escape the police’s radar. Telenipara is a working-class neighbourhood, inhabited by former jute mill workers. These goons set ablaze Muslim houses, they attacked Muslim men and women indiscriminately and created a reign of terror in Telenipara.

It’s only after the local Hindus, especially the Hindi-speaking Hindu milkmen, resisted these BJP thugs sent by BJP MP Arjun Singh, a notorious gangster, that they began retreating. The people’s collective resistance against a communal juggernaut, as exhibited by Telenipara, is a new optics in West Bengal’s politics and can be an antidote to the communal vitriol spread by the Hindutva fascists.

The West Bengal Police and Banerjee’s government took no stern action against the rioters or Singh, who was earlier a TMC strongman. This gave leeway to Singh and his men to portray the Telenipara incident as an attack on Hindus. The same line was followed by the entire Hindutva fascist ecosystem. BJP’s MPs from West Bengal began circulating fake videos and news to trigger unrest, while the local administration took no stern action against the perpetrators.

During this mayhem, the Bengali mainstream press didn’t bother to do investigative reporting on the issue following their policy of maintaining silence during communal violence. It’s only a handful of Kolkata-based English journalists of New Delhi-based new age media who covered the issue amid the lockdown. This limited the audience of such stories and allowed the BJP to spread more bush telegraph by playing its clichéd Hindu victimhood card.

In the run-up to the 2021 assembly election, there will be several incidents like Telenipara to create trouble for Banerjee’s administration and to vitiate the atmosphere of the state. Modi’s dirty politics can’t survive in West Bengal without communal polarisation and unfortunately, none has an alternative narrative ready.

The real issues of unemployment, economic crisis, unbridled privatisation and economic liberalisation drive by the Modi regime and the attack on labour laws to turn workers and employees into modern slaves won’t be playing a major role to politically arouse the masses unless the misconceptions created by the BJP and Banerjee’s failures are addressed at the same time.

Unless people’s movements against Hindutva fascist politics and its aggression are strengthened, it won’t be possible to stop the BJP’s juggernaut in West Bengal. Modi’s dirty politics will clearly have an advantage in West Bengal due to Banerjee’s incompetence and it’s clear that the BJP can’t be stopped merely by phrase-mongering or wishful thinking, but only through collective actions of the real anti-fascist forces in the state and beyond.