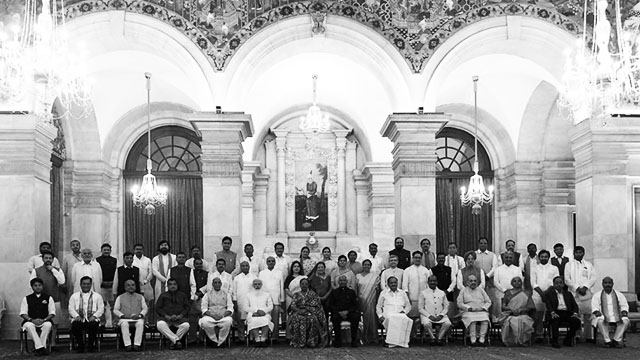 After two years of his second innings, Prime Minister Narendra Modi reshuffled his cabinet, sending mixed signals that bamboozled many. Twelve veteran Bharatiya Janata Party (BJP) politicians like Dr Harsha Vardhan, Prakash Javadekar, Ravi Shankar Prasad, etc, were stripped of their ministries. While many called Modi’s cabinet reshuffle an attempt to woo the ruling National Democratic Alliance (NDA) constituents, who have been ignored for long due to the BJP’s hubris over the brute majority in the Parliament, it’s evident that the action was undertaken to address a plethora of issues that are plaguing the Modi regime and the BJP.

The BJP is worried about the 2022 Uttar Pradesh Assembly elections, which will determine its fate not only in the largest state but also in its mission 2024. Chief Minister Yogi Adityanath, an ardent Hindutva fascist rabble-rouser monk whose style of work irks most of the BJP legislators in the state, is facing a tough challenge. The BJP’s internal strife over Yogi’s leadership forced Mr Modi and his closest associate, Union Home Minister Amit Shah, to intervene and do damage control. Uttar Pradesh got seven new ministers of state—junior ministers—out of a total of 36 new inductions during Modi’s cabinet reshuffle. But as other states like Karnataka, Odisha and West Bengal also got ministers, it’s unlikely that Uttar Pradesh was the principal concern for Modi.

Eyeing the OBC vote, which is around 50% in Uttar Pradesh, Modi’s cabinet reshuffle made Ms Patel along with Pankaj Chaudhary and BL Verma state ministers. To woo the Dalits, who are repressed under the Brahminical tyranny of Yogi, Modi inducted Kaushal Kishore, Bhanu Pratap Singh and SP Singh Baghel. To pacify the upper-caste Brahmins, who have been agitated by the dominance of the Thakur caste, to which Yogi belongs, in the state, Ajay Kumar was made a junior minister as well.

Also, by making Congress party’s turncoat Jyotiraditya Scindia—who helped the BJP to topple the Kamal Nath-led Madhya Pradesh government in March 2020—the Minister of Civil Aviation and former Assam chief minister Sarbananda Sonowal the Minister of Ports, Shipping and Waterways and Minister of AYUSH, the BJP tried to pacify them through Modi’s cabinet reshuffle as they both were denied the chief minister’s berth in their respective states. Sonowal is an elected member of the legislative assembly (MLA) and will have to resign and become a member of the Parliament (MP) within six months.

Through this reshuffle, Modi showed that the BJP isn’t baiting on Supriyo, a singer-turned-Hindutva rabble-rouser, anymore. He was one of the prominent leaders to steer the West Bengal poll campaign and even eyed the chief minister’s berth but lost the election to Trinamool Congress’s (TMC) Arup Biswas in the Tollygunge constituency. Modi awarded Dr Sarkar, Barla, Pramanik and Thakur as their areas did better during the elections, though the BJP couldn’t retain the 2019 margin. Pramanik himself won by a margin of only 57 votes from the Dinhata constituency and resigned from the MLAs position.

Dr Sarkar, a veteran Rashtriya Swayamsevak Sangh (RSS) activist and the MP from Bankura, is made one of the three junior ministers in the Ministry of Education, where he will be under Education Minister Dharmendra Pradhan. As Dr Sarkar’s constituency has a huge tribal presence—the 2011 Census showed West Bengal has 5.29m tribal people, 5.8% of its total population—the BJP has hatched a conspiracy to instigate them by titillating them with Islamophobia and raising the demand for a separate state, using the state government’s apathy towards these people as a subterfuge.

Barla, a tribal Christian, has become the junior minister in the Ministry of Minority Affairs, which has only one task now– denying the minorities their rights. Barla has stirred a controversy by demanding a separate union territory for the eight northern districts of West Bengal recently. He has helped the BJP hijack the long-pending demand of statehood raised by the Kamtapuri people, especially the Dalit Rajbongshis, who are indigenous and oppose Bengali upper-caste hegemony.

Though Barla’s demands are not supported by the state BJP’s leaders, his promotion to a junior minister’s rank showed that he has got the tactic support of the BJP headquarters as well as the RSS, which is trying to convert the tribal people of the tea garden areas to Hinduism to build a strong stormtrooper battalion in Jalpaiguri district.

Pramanik, a TMC turncoat, has been made the junior minister in two of the ministries– Ministry of Home Affairs (MHA) and Ministry of Youth Affairs and Sports. His stint in the MHA, as a junior to Shah, will help him create trouble in West Bengal, where the BJP accuses the TMC of sponsoring violence, while it is complicit in incidents of gory atrocities against minority Muslims in northern parts of West Bengal. This will pave the way to President’s Rule in the state using Article 356, which the BJP is willing to use as a last resort to control the state.

Thakur, the MP from Bongaon and a self-styled representative of the Bengali Dalit refugees from the Matua sect, is made the Minister of State in the Ministry of Ports, Shipping and Waterways during Modi’s cabinet reshuffle.

Modi had claimed his Citizenship (Amendment) Act, 2019 (CAA 2019) will provide citizenship to refugees belonging to six non-Muslim communities from Afghanistan, Bangladesh and Pakistan if they are exempted under the 2015 and 2016 amendments to the Foreigners Rules and Passport (Entry into India) Rules. Only 33,313 such registered refugees are living in India who qualify to apply for citizenship, as per the 2019 testimony by the Ministry of Home Affairs’ representative to a Joint Parliamentary Committee overseeing the law at the bill stage.

Thakur, who is the self-proclaimed leader of the Matua sect—an ostracised Bengali Dalit community that suffered immensely due to the partition of Bengal in 1947 and during the 1971 Bangladesh War—has helped the BJP and Modi by selling the CAA 2019 dream to the Matuas in West Bengal’s various districts.

Even though Thakur expressed his dismay over the delay in the publication of the Rules of the CAA 2019 and threatened to quit the BJP in late 2020, the leadership had managed to retain him. Now, Thakur’s elevation will be used by the Modi regime to lure the Matuas among whom the BJP’s support has considerably waned. These optics may be used to desist the Matua community from participating in the anti-National Register of Indian Citizens (NRC) struggle.

The notorious and the dubious

Modi’s cabinet reshuffle has promoted some of the controversial figures. Anurag Thakur, the Himachal Pradesh BJP MP, who was earlier a minister of state in the Ministry of Finance, has been promoted as the Minister of Information and Broadcasting and Minister of Youth Affairs and Sports. Anurag Thakur is one of the infamous faces who called Muslims “traitors” and provoked violence against them before the 2020 Delhi anti-Muslim pogrom by reiterating the notorious slogan – “Desh Ke Gaddaro Ko, Goli Maro Saalo Ko”, which became a warcry for RSS thugs who butchered people participating in the anti-NRC movement in North-East District of Delhi.

The Ministry of Information and Broadcasting, which was earlier headed by Javadekar, played a crucial role in curtailing media freedom in the country. An investigative story in The Caravan reported how Javadekar and other crucial members of the Modi cabinet drew a plan to gag the critical press amid the 2020 lockdown and pandemic crisis. Thakur’s elevation to this role will add teeth to the government’s aggression against the remnants of the free press in India.

Mansukh Mandaviya, an RSS proselytiser from Modi’s Gujarat, has been made the Minister of Health and Family Welfare, apart from the Minister of Chemicals and Fertilizers, both crucial ministries at the time of the COVID-19 pandemic. Dr Vardhan faced public outrage for his inability to deal with the challenges in a scientific way. But there are questions over how Mandaviya will manage the situation. Mandaviya won’t end the reign of pseudo-science and destruction of public healthcare but aggravate the crisis.

India’s present problems, political and economic, can’t be resolved by Modi’s cabinet reshuffle. The problem is with policies not with ministers. Under Modi, India has been officially recognised as an elected autocracy and there is no way the situation will change until the government is changed. Mere replacement of one set of bigots by another will neither serve the people’s interests nor build institutions that will promote democracy, secularism and socialism, the enshrined values of the Indian Constitution.