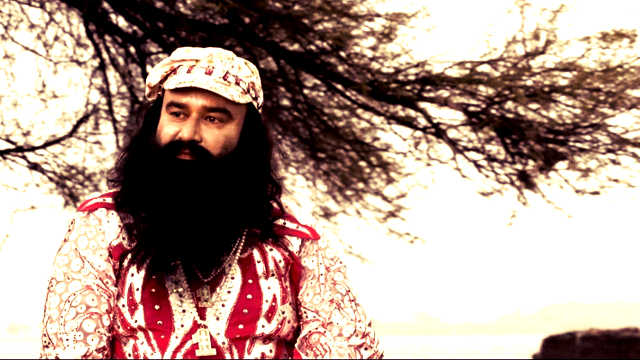 Gurmeet Ram Rahim ‘Insaan’, the self-styled godman, whom even Narendra Modi saluted to woo voters during the Haryana assembly election, now stands convicted of rape and is awaiting punishment from a CBI special court in Panchkula, Haryana. More than 100,000 supporters of the convicted god man are on rampage opposing the verdict of the court and the violence resulted in 35 deaths and over 150 injured by the time this article was completed. A 200-car convoy brought the Dera Sacha Sauda cult leader Gurmeet Ram Rahim to the court and post the verdict he was flown to a makeshift jail, which happens to be a guest house, in Rohtak. The nation is yet to know the quantum of the sentence that’s reserved by the court for the godman, convicted of two rapes and accused in two cases of murder, but the trailer on the verdict day showed the intensity of violence the states like Haryana and Punjab will experience on Monday, 28 August.

Since the time India officially embraced the neo-liberal economic policy and opened up its gates to let in the big foreign monopoly capital owned corporations, there has been a noticeable boom experienced by the spiritual industry, which has essentially become more corporatised than ever. Though the films and tv shows portrayed, to some extent, the hollowness of these spiritual gurus who claim they are men of God on earth, the economic distress and insecurity that engulfs the lives of the lower and middle-income groups forced a lot of people to seek spiritual salvation from everyday economic and social problems. Taking advantage of the situation, many amateurs joined the spiritual industry and became revered babas and ammas in no time. Their fan followers are two distinct camps of people, the minority upwardly mobile and financially well-off elites and upper middle class, while the majority are poor and lower-middle-class people who are panicked by the uncertainties of the neo-liberal economic system and seeks solace in the spiritual cacophony of the gurus.

Over years, thanks to investigative journalism and efforts of few bravehearts, a lot of such self-styled babas and ammas got exposed in public, mostly due to their alleged involvement in the sexual exploitation of the disciples. At every instance of legal actions taken against such notorious men and women, a large section of their disciples was incited to riot and rampage with an aim to bully the people and force the government to allow such culprits go scot-free. The BJP and the RSS are very well fond of such gurus and regularly tries to legitimise their chop shop of spirituality by endorsing them through some of the saffron stalwarts. Nearly all of these corporate gurus are vocal supporters of the BJP and influence their disciples to vote for the party during each election. It’s no wonder, therefore, to find Narendra Modi saluting the Dera Sacha Sauda chief and convict in a rape case during Haryana assembly election to score some brownie points.

Gurmeet Ram Rahim is a convict in a court of law and can fight for his innocence, if he is, in higher courts of law. Taking up arms against the law and bringing a part of the country into standstill because a small section of people, the die-hard followers of a convicted god man, didn’t like the verdict is an unbelievable thing in a 21st-century world. Prime minister Narendra Modi claims that under his reign India is turning better and is becoming a fast-growing economy, a world power to reckon with. Narendra Modi didn’t delay the publication of his note condemning the violence by the followers of Gurmeet Ram Rahim Insan. But the same prime minister appeased a then rape-accused, and now convict, godman Gurmeet Ram Rahim during the Haryana assembly election, to ensure he gets a good share of votes from those people who will not vote for the BJP in Haryana because they believe in its ideology or its agenda, but because they are told so by a man whom they call the reincarnation of God on earth.

This double standard, an inherent feature of the Hindutva camp’s followers and ideologues, suits Narendra Modi and the Hindutva hate monger bigots like Sakshi Maharaj, who, due to his allegiance with the RSS, can openly defy court orders and question the law for taking its course on the Gurmeet Ram Rahim case. While Narendra Modi and Haryana BJP government’s chief minister Manohar Lal Khattar condemned the violence by the followers of Dera Sacha Sauda chief, Sakshi Maharaj threw his weight behind justifying the violence and condemning the court’s verdict. This sheer hypocrisy of the BJP shows how the Hindutva camp can play on behalf of two warring sides at the same time and utilise every event and opportunity to polarise the people on communal lines, by invoking the Hindu identity and the purported “persecution of Hindus” by the law of the land.

While accusing the CBI court, which delivered the verdict based on the prosecution’s presentation of the case and on the basis of the evidence and facts, the BJP’s most celebrated MP Sakshi Maharaj forgot that on one hand the CBI is managed by the Modi government’s home ministry, now headed by longtime RSS knicker clad soldier Rajnath Singh, and on the other hand, the case of investigation of the rape charges against Gurmeet Ram Rahim was handed to the CBI by the BJP-led NDA government with Atal Bihari Vajpayee at the helm in 2002. But logic and facts never come into play when a bigot is to be taken into confidence, hence Sakshi Maharaj will keep lambasting the court and the entire judiciary.

Haryana’s BJP government and Punjab’s Congress government (while remembering that Gurmeet Ram Rahim’s daughter is married to a Congress leader and Capt. Amarinder Singh paid visit to the rock star godman to seek votes and blessings earlier) played a very poor role in maintaining the law and order in their states and indirectly allowed the boisterous followers of the rape accused to bring life to stand still. The governments of both states, especially that of the BJP-ruled Haryana, deliberately allowed the followers of the godman to assemble at crucial points and it did nothing to deter them from such gatherings, because the BJP is under immense pressure to continuously appease the members of the sect and ensure their electoral loyalty to the Hindutva camp, towards which the godman swung since the rise of Narendra Modi in 2014, remains intact.

Even the High Court of the state questioned the deliberately caused laxes in security arrangement and the lacklustre attitude of the BJP government of Manohar Lal Khattar, which allowed the miscreants to unleash violence with utmost ease and pressed in the forces to curb the violence only when it expanded rapidly and threatened to engulf the most important cities in the state. The RSS members within the Dera Sacha Sauda are attempting to incite communal tension in the rural areas of Haryana and use the conviction of Gurmeet Ram Rahim in the CBI court as a smoke screen to launch attacks against the Muslim community in parts of Haryana, Delhi and Punjab.

The bush telegraph runners of the RSS are also distracting the mass attention from the fact that Gurmeet Ram Rahim is convicted of rape by using distorted campaigns on social media to promote the lie that the conviction of the godman is caused due to some conspiracies hatched by “anti-national” powers, a clear reference to the Muslims, whom the Dera Sacha Sauda chief tries to project as subservient to the Hindu identity in India. The BJP and RSS social media strategists are also joining the plight of another rape-accused godman and Hindutva supporter Asaram Bapu to that of Gurmeet Ram Rahim and questioning why Hindu religious leaders are “persecuted” in India? Though they didn’t answer that why the Muslim community members, the Dalits and Tribals are lynched in India or thrown behind the bars without trials for years on baseless allegations by a system that’s strongly Brahmanical in essence?

As the violence is intensifying and threatens to multiply if the court announces harsh punishment for the self-styled guru Gurmeet Ram Rahim ‘Insaan’ on Monday, the double standard of the very government and the ruling political bloc is becoming visible. The same politicians who would bay for the blood of young Kashmiris for throwing stones at security forces will call the Dera Sacha Sauda followers’ violence merely a spontaneous act of agitation against an unfavourable verdict and will never employ tough strategies to curb the violence. This double standard by the Hindutva regime in dealing with ‘agitations’ define the goal towards which the present dispensation led by Narendra Modi is driving India towards. It’s certainly not the India where justice and public interest will prevail, but just the rule and sanctity of dubious people who corporatised spirituality will exist to exploit the common people.