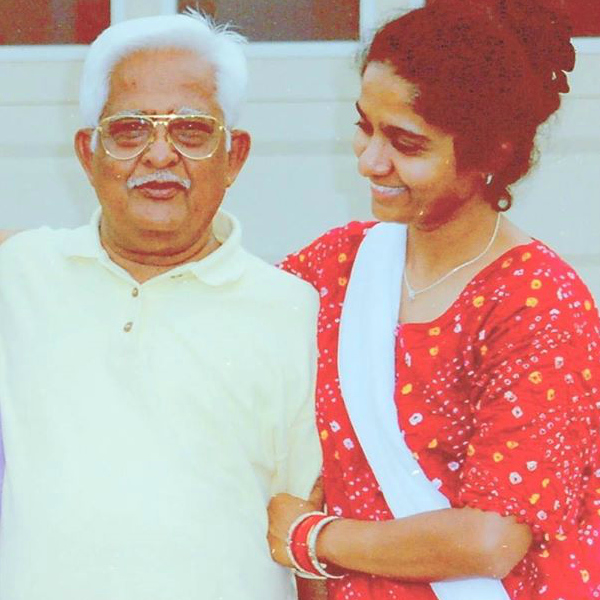 Indian premiere of the BJP – RSS led government, Narendra Modi, once again gave a proof of his extreme selfie obsession and love for the camera when he started campaign #SelfieWithDaughter over Twitter to promote girl children. The campaign drew flank from the progressive people of the country who questioned the move and the hype as a solution to end discrimination against women, especially girl children and female foeticide. The Modi supporters, mostly employees of online marketing firms that run the social media campaigns of the Sangh Parivar, started abuse campaign against the people questioning the move. The BJP – RSS activists in different fields also joined the fray.
Shruti Seth, a film and television artist questioned the wit of the prime minister and his sycophants and was abused on a large scale by the Modi campaigners over social media for questioning the prime minister and his move. Lately, the most revered ‘babuji’ Alok Nath joined the game showing his ardent support for the BJP-RSS by hurling abuses at women right activists like Kavita Krishnan as well as Shruti Seth. 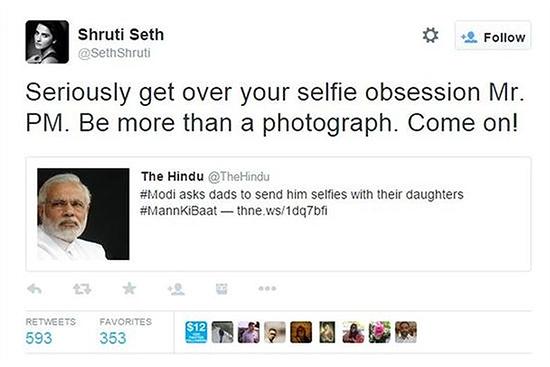 Since the Loksabha poll campaigns of 2014, the BJP-RSS has hired multiple web marketing and social media marketing companies, mostly run by their hardcore supporters from the upper caste Hindu community, to start a virtual supporter show over the internet to impress the middle-class voters of India, especially of the urban areas. These campaigners created multiple fake ids over the social media platforms to increase the ‘likes’ on the official pages of the then prime minister candidate of the BJP-RSS, and have also launched vicious attacks against anyone questioning the policies and agendas of the BJP-RSS combo. Though many firms were employed until the parliamentary polls, some were retained by the right wing extremist organisation for a long term basis. These companies still run their campaigns of hatred mongering against the opposition, the religious minorities and the democratic and progressive forces of the nation. Multiple ids are still in use with fictional names and generic or abstract images for their profiles and people behind them carries on verbal assault on the social media against anyone writing against the policies of the Sangh Parivar.

The Selfie campaign of the prime minister was a gimmick like most other campaigns, which has no connection with real life problems and cannot be a solution for complex socio-economic problems like female foeticide, which is an outcome of the feudal production relations that still remains in the Indian countryside. The RSS and its mass organisation, the BJP, is itself filled with people with extreme anti-women sentiments and they leave no occasion to spit their venom against feminism and the liberation struggle of the women for socio-economic equality in this nation. Their misogynist attitude makes them the bitter critique of the progressive people engaged in the field of organising the women against male domination and male chauvinism, which is promoted by the same social classes of feudal landlords who form the core of the RSS-BJP ideologues. Moreover, neither Narendra Modi nor his sycophants answered the question of the right of Congress MP Ehsan Jaffri to get a selfie clicked with his daughter. They went into the silent denial mode, which is now adopted by most of the mainstream corporate media.

When the megalomaniac Prime Minister’s whim and obsession with camera makes him forget that he is ruling an undeveloped country where millions of people, especially in the rural areas, does not have enough to eat, leave alone owning smartphones, where smartphones are used by those who are wealthy, and the poor people cannot afford to take selfies in the absence of money which can fetch them a phone with a front camera and social media access.

The hollow campaigns are the only solution that the government led by Modi could come up with to solve the real problems of India. The government is tied to the conditions imposed by the US-led world monopoly-finance capital and cannot, therefore, make any changes in the economic base of the nation, rather they can do cosmetic changes to hide the real problems that haunt the common people every day and night.

The problem of Indian polity is that the political forces of this country get away with gimmick mongering and poll oriented hollow rhetoric and promises. As the people of the nation mired in utmost poverty along with unemployment and lack of basic necessities look up to these players to resolve their crisis, these forces use the platform offered to them to ensure they can accumulate riches for themselves by serving well the interest of the corporate houses, foreign monopoly capital and Indian feudal lords.

Hence, the problems that surrounds our nation have no quick solution, apart from that no right-wing fascist force like the BJP or the Congress will ever dare to ensure that the common people get their rights rather they will vociferously pitch for the cause of corporate monopoly finance capital and its omnipotence on the lives of the people.