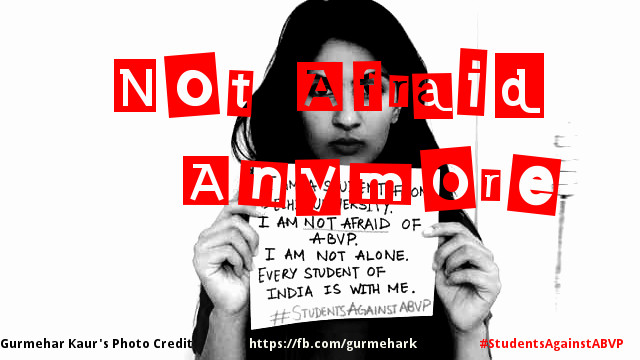 In a perfect world Gurmehar Kaur would have been an “Adarsh” daughter for the RSS and its affiliates, who would have hailed her as a martyr’s daughter and used her as a shield to justify all injustices meted out by the state machinery and also muffle the dissenting voices citing – “men are dying at the frontiers and borders” clause.

The world isn’t perfect. So, Gurmehar Kaur isn’t an ideal daughter of a martyr; she is rather the most vilified girl with a polluted mind, from whom the RSS and the BJP would love to keep the entire youth at bay. Because she is asking questions, uncomfortable and critical questions. That too questioning the pillars of the Modi government, which is trying to turn India into one leader, one language, one religion and one ideology state.

Gurmehar Kaur became the sinner in the book of the Golwalkarite-Savarkarite saffron bloc. So, Gurmehar Kaur was condemned. Spared an acid attack like the one that happened when Soni Sori spoke against the mining giant corporations and their lackey Chhattisgarh government.

Trolling of Gurmehar Kaur by the ABVP goons, against whom she stood up firmly, was predictable; the numerous rape threats and character assassination of the 20 year old student was also expected according to the RSS rulebook of social media, and it’s not unexpected to see yesteryear sportstars and B-grade cinema actors criticising anyone vocal against the Modi regime to get themselves registered in the good book of Nagpur and to qualify for some awards, posts, or a Rajya Sabha berth.

But the real threat was that the government not only stooped to the level of the trolls (many of whom the Prime Minister Narendra Modi personally follows on Twitter were issuing rape threats) and denied the agitating woman her constitutionally guaranteed security from those men who were threatening to rip her apart.

A government in a democratic setup is paid by the people (yes, the people – common working people who live on less than Rs. 100 a day) through indirect and direct taxes and it’s expected to fullfil its obligation of governance by providing equal services and opportunity to everyone, without distinguishing between those who voted for the ruling clique and those who didn’t.

The BJP has always showcased the “government” as an omnipotent being to the people and demanded the people’s unconditional submission before the government’s might. Since last one year the BJP has mixed governance and party politics together and has publicly asked the opposition to give up its job of opposing the government because the Hindutva strongman Modi is at the helm.

Modi is above questions; he only needs loyalists, the sycophants who never question. A megalomaniac RSS worker cannot tolerate dissent, let alone allow it. BJP always provided governance to those who funded the saffron bloc, but not even those who voted it. It gave absolute rights to people who are die-hard RSS and Modi loyalists, and for the critiques, even the constitution guaranteed right to life and dignity became a luxury.

This article tells us how the RSS and its foreign and domestic corporate masters patronises the mediocre ABVP and other fascist stormtrooper organisations to terrorise dissenting voices in the campuses. It’s the same organisation that once killed a professor in the college campus of Ujjain and until now remains unapologetic about the murder and immune from prosecution.
After all, ABVP is the student organisation of the RSS, which is also heading the ruling BJP and probably the ISI moles who operated under its cover in the IT cells and cow vigilante brigades. When it comes to IT cell, the critiques say most of RSS-BJP and Modi supporters who troll and issue rape threats online, are staff of the IT cell who operate multiple accounts and intimidates people who challenge the Modi regime. IT cell leaders in Madhya Pradesh, a BJP ruled state, are nabbed by the ATS on charges of being ISI agents. The ABVP, the rapist troll army of the RSS, and any other bodies attached with the Sangh remained tight lipped about the arrests.

Raising a placard on social media against this organisation will certainly not go well with Nagpur and hence not only threat the woman with rape, but even show her that the Home Ministry is against her, which means she is on her own in a North Indian city like Delhi, notorious for its crime against women, and she is now the target of the largest fascist and rapist gang of the country. She can’t continue for long, after all in 20 years she walked many extra miles that people double her age couldn’t. Gurmehar Kaur certainly deserves appreciation, she must be the role model of all women who are trying to speak against injustice, against male domination, and against intimidation of the fascists.

Gurmehar Kaur must be replicated. It scares the RSS to the core and none of the affiliates of the grand fascist guru can stand the sight of a young girl daring to raise her fist against the tyranny unleashed by the Modi government under the garb of nationalism and “patriotism” throughout the campuses.

India needs millions of its Gurmehar Kaurs stand up against the tyranny, against fascism, against toady journalists and against those servile celebrities, who are keen to lick the boots of the authority to get perks.
India needs millions of Soni Soris, to resist the state terror unleashed on poor tribal people of mineral rich areas, and India needs millions of those unnamed Dalit, Muslim, and Tribal women, who are putting up a brave fight again all form of exploitations laden on them, including the sexual violence perpetrated by those who adorn the attire of “patriotism” and nationalism.

Only when India’s daughters will unitedly erect a resistance barrier against the fascist Brahminical patriarchy and its subordinate forces throughout the country, the saffron camp will see its fortress crumbling. Once more the Hindutva brigade tried to forcefully muffle free voice of the dissenting students in the month of February, once more it has burned its fingers in the raging flames of students movement.

Kiren Rijiju or Arun Jaitley cannot cover the RSS’ mediocrity and intellectual paralysis any more. They are shuddering to the slightest sound of leaves, even Gurmehar Kaur looks lethal to them. The crisis and panic within the fascist Hindutva camp is surely the harbinger of good news for the democratic and progressive forces. Thank you, Gurmehar Kaur and Soni Sori, and everyone else out there in the darkness fighting for light.