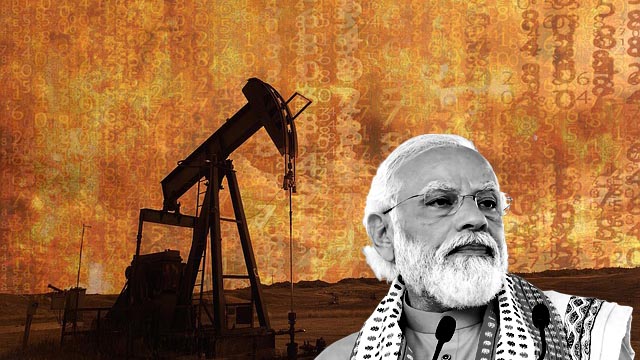 Russia’s military operations in Ukraine targeting Kyiv’s neo-Nazi regime have created a stir in India as well. While a lot of discourse is happening over the outcomes of the war, little is discussed on the economic impacts of Russia’s war against Ukraine on India. What needs focus is the probability of a severe hike in fuel prices in India after the crucial assembly elections in five states, including Uttar Pradesh, are over.

The hike in fuel prices in India due to Russia’s war with Ukraine is a possibility as the Brent crude oil price jumped $105 a barrel, the first time since 2014, on Thursday, February 25th 2022, after Russian President Vladimir Putin announced military operations in Ukraine to “demilitarise and de-Nazify” the largest European country. This will have a severe impact on India’s oil prices.

Though the Brent crude oil price fell to $99.08 a barrel later on the same day and fell further to $97.93 per barrel on Friday, February 25th 2022, it’s unlikely that there will be any drastic fall until the situation normalises and the supplies resume to the normal level. For a country like India, which spends most of its foreign reserves in buying fuel, the situation will trigger massive retail inflation.

A severe hike in oil prices in India will seriously jeopardise the recovery of the economy following the pandemic’s jolt for two consecutive financial years (FY). Crude oil refinement also costs money and the wholesale price tends to rise, which will be gradually placed on the shoulders of the common people who will find a hike in oil prices in India burning holes in their pockets.

Since Russia is a major source of fuel export for the world and as the European Union (EU), the UK and the US are imposing severe sanctions to choke its economy, the fuel prices shot up in the international market. Even if Ukraine negotiates peace with Russia, after remaining elusive, the sanctions won’t let the supplies from Russia reach its pre-war days for months, if not years, to come.

Though India doesn’t depend on Russian oil and gas, the fall in supply from Russia to the international market will anyways cause a steep hike in fuel prices globally and its impact will be felt in India. It’s unlikely that the member states of the Organization of the Petroleum Exporting Countries (OPEC) will be able to increase their supplies to meet the demand-supply gap.

In India, a 1% hike in the international fuel prices can increase the retail prices by 7 to 8 bps while the wholesale price may go up by 13 to 14 bps. This means a hike in 10% fuel price will be translated to a hike of Rs 8 to Rs 9 in retail fuel prices.

Since ascending to power in 2014, Prime Minister Narendra Modi has allowed the oil companies to maximise their revenues by increasing fuel prices in the domestic market. With a total dissolution of the oil pricing mechanism and allowing the markets to determine the fuel prices, the Modi regime has been passing on the burden on the common people.

Moreover, at present, the Modi regime levies Rs 32.9 and Rs 31.8 Union taxes on one litre of petrol and diesel respectively. Apart from the Union, the States also levy their taxes on these fuels to fill their coffers and meet revenue deficits. The States don’t have any uniform tax rate for fuels and their charges are proportional to their desire to meet financial deficits. Though the Union collects fuel cess from all States, it doesn’t share the money with the latter.

However, during election times, the oil companies don’t generally hike the oil prices but do so once the polling is over. In the case of the current assembly elections in the five states, out of which four are ruled by Modi’s Bharatiya Janata Party (BJP), oil prices have remained stable for several weeks. It’s expected that the prices will increase once the last phase of polling is over in the first week of March.

Petrol prices in the top metro cities on Sunday, February 27th 2022, are given below:

Similarly, the trend of liquified petroleum gas (LPG) or cooking gas will show how month-upon-month and year-upon-year the prices have been on the rise. The data shows the prices of unsubsidised cylinders (14.2 kg) in the metro cities of India from January 2014 to September 2021.

At present, according to the data released by the privately-held Centre for Monitoring Indian Economy (CMIE), the unemployment rate in India is 8.1% in February 2022. In case of a severe hike in fuel prices in India, the resultant inflation will hit the country badly and will worsen the ongoing economic crisis. This can even lead to lesser food consumption by the poor and worsen India’s hunger situation.

As the Modi regime is nonchalant about any severe hike in fuel prices in India, unless there are elections, it will not act, as usual, to protect the people from the rise in prices. While the fuel prices were raised under different pretexts since 2014, even though the international crude oil prices remained far below the $100 threshold, this time, thanks to Russia’s war with Ukraine and the subsequent sanctions imposed on Moscow, the rise in international crude oil prices will be used as a face-saver by the Modi regime.