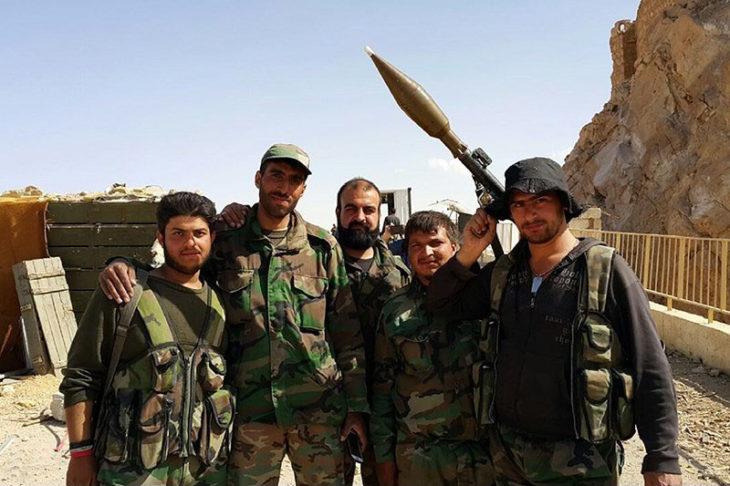 With the advent of the Syrian Arab Army, supported by the Russian aerial strikes, towards Aleppo, the American government and its Western allies started panicking and seek all recourses it could take to prevent an inevitable catastrophe that was looming large on those forces, including the different auxiliaries of the Islamic State, which receive immense financial and logistical support from Washington DC.

The US government claimed that it brokered a deal with the Russians, the major partner of Syrian President Bashar al-Assad, to get the terrorists and their auxiliary forces, called “rebels” or “moderate rebels” by the mainstream Western corporate media and their worldwide downlines, out of the conflict zone to a safe one chosen by the terrorist forces. The intention of the US government in brokering this “deal” was to smuggle out as many as Islamic State terrorists from the city where the government and the terror groups were fighting since the last four years.

Syrian Army personnel in the meantime unearthed several hidden torture chambers managed by the West’s favourite “rebels” like the faction which was formerly the official Al-Qaeda unit in Syria. According to a report shown by the Russian state-owned media, the Syrian Arab Army even found the banners used by the Islamic State terrorists in some of the bunkers in civilian areas used by these Western-funded mercenaries.

Though the Russian government didn’t confirm the signing of any such deal with the US or any of its Western allies to provide safe passage to the terrorists, Reuters reported that under the United Nations observation the Islamic terror groups will be provided a 48 hours long window to leave their lost territory and relocate to some other place. Reuters reported that the Jabhat Fateh al-Sham (formerly known as Al-Nusra, an ally of the Al-Qaeda) was allowed to go to Idlib. The other factions belonging to different hues of Islamic terror group funded by Israel, Saudi Arabia, Turkey, and Jordan were promised safe passage to different locations that they consider safe for themselves. The Turkish border areas remain a safe haven for these so-called “rebels”.

As the rebel hold on the city of Aleppo was falling before the Syrian Arab Army after a long and tedious battle that lasted for four years, there was no dearth in the American attempt to malign the government of Assad and the Russians by labelling allegations like deliberate massacre of innocent civilians by these two forces.

Taking advantage of its hegemonic position in the world’s political arena, the US ruling classes have ensured that the governments of most countries, especially in the countries of Africa and the Middle East, does work according to the whims of the White House and sort out every difference through discussions.

Now by raking up the humanitarian crisis story and by portraying a high number of civilian deaths, the mainstream Western corporate media is moaning loudly when the Syrian Arab Army is taking over the strongholds of the Islamic State sponsored militants.

The major aim of carrying such false propaganda was to launder funds to the terror groups to help them regroup and launch a counter-attack against the government forces. The “aid” sent by the US and the Western powers never reached the people who became victims of a war planned by the CIA and the Wall Street years back to take control over the natural resources, especially oil fields of Syria.

In their effort to destabilise and then overthrow the Assad regime, the US government helped the Islamic State terrorists to seize the city of Palmyra on 11th December. Palmyra was won back from the ISIS by the Syrian Arab Army in March 2016 after a fierce battle. The IS terrorists could take over the ancient city only at a time when their comrades were defeated by the joint action of the Syrian Arab Army and the Russian Air Force.

The Islamic State moved around 4000 fighters from its stronghold Raqqa to launch an attack on the city of Palmyra guarded by just 800 Syrian Arab Army personnel. The city didn’t had any Russian support nearby during the attack. Russian sources said the Islamic State launched the attack only after sending 5000 terrorists to Raqqa and Deir Ezzur from Mosul in Iraq.

It’s evident that the movement of such a big contingent of forces from Mosul of Iraq to Raqqa and then Palmyra in Syria couldn’t go unnoticed by the US satellites and surveillance drones deployed in the conflict zone of Iraq in a much hyped “war against Islamic State”. So the US cannot just deny its involvement in the pursuits of the most brutal Salafist force on earth.

Talal Barazi, the governor of Homs, told the media that the Syrian Arab Army managed to evacuate 80 per cent of Palmyra’s population and 20 per cent of the population got trapped in the war zone. He informed that the Syrian Army is working hard to secure the passage for those civilians trapped in the city, who are also vulnerable to a vengeance drive of the Islamic State.

The Russian Defence Ministry announced on Sunday 11th December that the Syrian Arab Army soldiers, with the Russian bomber jets supporting them, killed over 300 terrorists. During an interview with RT’s Maria Finoshina in Damascus, President Bashar al-Assad said that the terrorists came with huge manpower and firepower, which was possible only due to the immense support from “states, and not just state” provided to them. The president of Syria pointed his finger towards the entire bloc of Western imperialist forces who are supporting each and every forces to destabilise Syria for establishing political-economic hegemony there in the future.

According to Moscow, the Russian air force conducted 64 aerial strikes on the Islamic State terrorist positions and reserves, while 11 battle tanks and infantry fighting vehicles, 31 cars with heavy machineguns were destroyed, and over 300 militants were killed. Syrian Arab Army adopted a new tactics during this new attack launched by the Islamic State against Palmyra. They didn’t put up a direct resistance rather adopted a guerilla tactics by allowing the Islamic State terrorists to enter the city and then eliminating the enemy through a ring of attack.

The unapologetic American support for the Islamic terrorists in Syria exhibits the level of commitment of the American government in their much celebrated “battle against ISIL and its allies”, a hogwash used by the Obama regime and its corporate allies to launder the tax payer’s money to the military industrial complex and fund the Zionist Israeli and Salafist Saudi puppets in Middle East Asia.

By providing arms, logistical support, and funding to the Al-Qaeda linked terror organisations in Syria to realise Wall Street’s dream of overthrowing the government of Assad, the US manifested its eternal bond with religious terrorism throughout the globe and also exhibited how inalienable the American government and the Islamic Salafist terror are from each other.

The knot both parties tied together in their battle against Soviet Union in Afghanistan, brought a havoc in the world and helped the American corporate world to spread Islamophobia through their crooked propaganda campaigns. It also helped monstrous capitalist tycoons like Donald Trump to polarise white supremacists to win an election easily and head towards the throne from where the king rules the whole world sans few rebel countries like Syria, Russia, or Korea DPR (North Korea).

Syria is at present in a crucial state as the Syrian Arab Army is fighting back vehemently against the aggression launched by the US and its allies like France, Germany, Britain, Israel, Saudi Arabia, Jordan, and Turkey through a rainbow coalition of reactionary Islamic terror groups.

The Syrian nation is not only fighting for its existence in the present world, the government of Bashar al-Assad is not only battling against the Islamic State terrorists to safeguard its own rule, the Syrian nation and the government of Bashar al-Assad is fighting a battle to prevent a major catastrophe in Syria and the Middle East Asia, which could turn the country into another Afghanistan torn by a very horrible civil war.

The victory of the Syrian government in the civil war fuelled by American money and guns can bring peace and stability in the region and can thaw the onslaught of the US funded and Saudi Arabia controlled Salafist Islamic terror groups that, while working as American and Western pawns, carry out most heinous violent attacks against innocent civilians throughout the world.

If the Americans and the West could manage to overpower and oust the government of Bashar al-Assad then they will be able to kindle a prairie fire of sectarian violence in Syria, create chaos, in the words of President Assad – because the United States creates chaos in order to manage this chaos, and when they manage it, they want to use the different factors in that chaos in order to exploit the different parties of the conflict, whether they are internal parties or external parties.

The alternative coalition between the government of Syria, Iran, Russia, and the Hezbollah and other military units opposed to Islamic terror showed the world a very new thing that was not visible to three generations, who have seen only an unipolar world where the US and its allies commanded the everyday affairs and toppled everyone they didn’t like, be it Nicolae Ceausescu, Slobodan Milošević, Saddam Hussein, or someone like Muammar Gaddafi.

This alliance showed that it’s not impossible to go beyond the narratives of the Western corporate mainstream media propaganda and still win the confidence of the people and defeat the aggressors and the terrorists by building up a massive resistance against an enemy that is supported by the lone superpower of the world. The alliance in Syria showed that it’s possible to defeat the menace of terrorism without rhetoric or without imposing a police state on the people.

Syria shouldn’t be Afghanistan 2.0, rather Syria must show the world what a reversal to the Afghan incident can bring to the world, which is now controlled and ruled by a minuscule section of Wall Street hawks supported by drones of Pentagon and snooping by Langley and a shameless government that works full-time to serve its interest. Syria should be the appropriate counter punch on the US and its terrorist allies by the people who were bullied, intimidated, oppressed, and butchered for long by them.

Share your feedback on this article by either commenting below or write to us peoplesreview@outlook.com