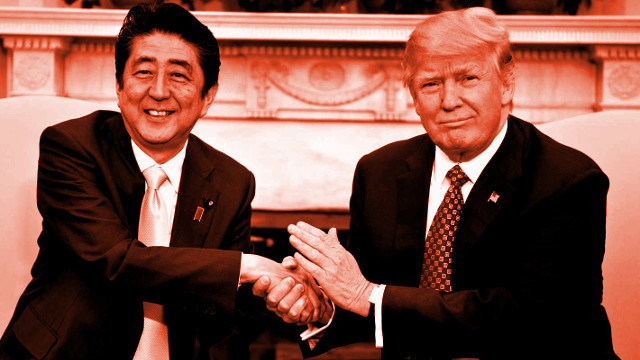 Japanese Prime Minister Shinzo Abe won a near landslide victory in a reelection after gambling his luck behind it and as per the ratings in the Japanese and international mainstream media, he is one of the most successful politicians in the post-war Japan. This victory is a sign that the western imperialist bloc led by the US, which is reviving the notorious militarist-fascism in Japan, to make it the strongest American outpost in Asia Pacific region, is now keen to launch a strong military onslaught against Democratic People’s Republic of Korea (North Korea) and later on against China, using Japan as a pawn. Abe didn’t hide his intentions behind supporting the American imperialist ambition; as a trusted lackey of the US, he started firing a salvo against Pyongyang soon after winning the election. He said that his victory is a mandate of the Japanese people in support of his venomous North Korea agenda.

The majority of the Japanese people are vocal against the US military domination of the country, the subjugation of the Japanese people to the American interest and the enslavement of the Japanese industry by the Wall Street. The evil nexus between South Korea – Japan – Australia, which has the support of India and other South Asian neo-colonies of the US, is working hard to instigate the trouble in the Korean peninsula to new heights so that a support base can be created in the US and Asia in favour of a war against DPR (North) Korea, which stands resolutely against the US bullying and refuses to give up its sovereignty and turn into an American neo-colony like the southern part of the Korean peninsula. The working class of Japan has been fighting against the American imperialist policies and the Abe government’s total submission to the US and its allies at the cost of Japan’s sovereignty. However, by using the immense money-power at his disposal and by igniting fascist chauvinist flames among the middle-class and rich Japanese, Abe made his job easier than before.

Shinzo Abe is a cunning agent of international finance and monopoly capital that owns and controls the major part of Japan’s economy. Every Japanese firm is some way or another linked with the international capital and the working class faces the most humiliating condition under the dictatorial rule of the Japanese capital and its master, the international monopoly and finance capital. Shizo Abe is trying to play the same role that the fascist Tojo did during his reign as the fascist war monger leader during the Second World War. The cult of Abe is built by the royalist-fascist-militarists who are demanding an end to Japan’s moratorium on military building for overseas operation, which was forced on Tokyo after its humiliating defeat to the Allied power in the Second World War. Abe is seen as a man who, like Tojo, will revive the fortune of imperial Japan by aligning strongly with the biggest fascist power of modern era, the US and its lackeys, regional and international to take on its age-old enemy China, which soured the Japanese plan of world hegemony during the Second World War.

To this effect, Abe is reaching out to all anti-China powers in the Asia-Pacific region and in South Asia. From weaning the governments of the countries like Vietnam and Philippines into the anti-China war league to financing India’s ambitious bullet train project at a high interest rate, the Japanese prime minister is leaving no stone unturned to act as the key collaborator of the US in the region and even outdo the US neo-colony South Korea’s leadership in the game. The rewards have been very motivating, as the US is now slowly relaxing its tight regulation on not allowing Japan to build its army back and use it for international operations. Rather, the US is partnering with Japan in military exercises, which are no way defensive but overtly aggressive in nature and threatens the existence of a free and sovereign country, DPR Korea.

Shinzo Abe’s unapologetic attitude in defending the war crimes and eulogising the war criminals of fascist Japan has earned him sharp criticism from the progressive, democratic and peace-loving people of Japan and elsewhere, but in this act the US see a perfect match for its agenda of isolating and encircling China militarily, as the revival of Japanese militarist-fascism will help the US in using it as a proxy in leading the front against DPR Korea and China, while it can preserve its own forces and their casualties. Donald Trump is a seasoned businessman and he has very cautiously placed his baits on the Japanese black horse, Shinzo Abe, so did the Europeans.

Only the Japanese working class, through a strong anti-fascist and anti-imperialist movement, including their heroic strike struggle, can bring forth an end to the US domination over Japan and end the tyrannical fascist rule of Shinzo Abe and other warmongers who have driven the economy of Japan towards astray, created economic crisis and tried to fool people about the situation at home by playing with fire in the courtyard. As Japan continues to face a severe crisis in the economic front, war and jingoism around war remain the only way how the US and its Japanese lackeys like Shinzo Abe can divert the attention of the people towards DPR (North) Korea and China. But if the working class’ struggle intensifies against this monstrous fascist rule, then that will certainly be able to topple the anti-people, war monger, fascist Shinzo Abe regime once and for all. The downfall of the Shinzo Abe regime and the defeat of the militarist-fascist clique of Japan’s royalists will ensure that peace can get another chance in Asia-Pacific region and the war plans of Donald Trump in the Asian theatre surrounding China and DPR Korea suffers a serious setback. Unless Shinzo Abe is forced out of power with his fascist league, there can be no chance for peace to prevail as the fascists like Abe exist on their politics of warmongering, which is eventually lethal for the human civilisation. Japan should become what it ought to be, the land of peace and demilitarisation, at no cost should the Japanese people let the spectre of the Tojo-era haunt them again.