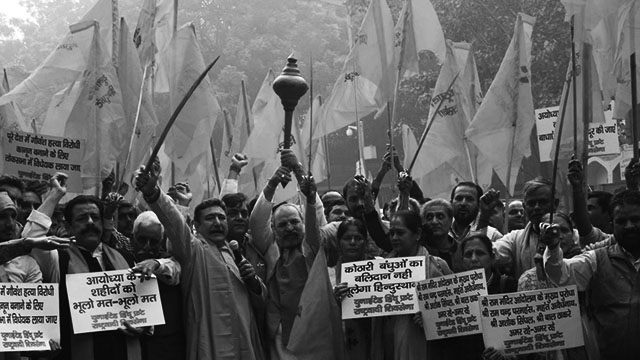 Alike the controversy itself, the Ayodhya verdict by the Supreme Court also divided the nation horizontally. While one camp is ebullient that its claim was endorsed by the apex court, using the rationale that faith is higher in value vis-a-vis facts and logic, the other camp is saddened that secularism, as promised by the Indian Constitution, died a painful death in the corridors of the judiciary, to which many looked up with hope. A critical analysis of the Supreme Court’s Ayodhya verdict will show how the 1,049-page-long judgement, which is surprisingly unsigned, has left a long trail of inconsistencies and contradictions.

As a practice in India, the Supreme Court’s judgement is never criticised out of fear of reprisal from the apex court or zealots who consider the uttered words as an unchallenged writ in the Republic. However, under Article 19(1)(A) of the Indian Constitution, the citizens can enjoy unbridled access to freedom of expression unless that’s censored by the state under emergency. As no emergency reigns now, a critical analysis of the Supreme Court’s Ayodhya verdict can be done. However, it’s, of course, illegal and contempt of the Court if the judgement is criticised with an intention to stop people or agencies from executing it or if the people are incited to disobey the verdict.

In this article, the critical analysis of the Supreme Court’s Ayodhya verdict will focus on the lacuna in the verdict and the contradictions that are arising from it. The Supreme Court had earlier closed the hearing of the Ayodhya dispute after a 40-day marathon hearing on the issue. The apex court gave extreme importance to the case, even more than the petitions over the abrogation of Article 370 and Article 35A of the Constitution and the imposition of a brutal military blockade on Jammu & Kashmir by Prime Minister Narendra Modi’s government.

Such priority to this case, at a time when the Kashmir crisis became an Albatross around the Modi regime’s neck and when the ruling Bharatiya Janata Party (BJP) and its parent body Rashtriya Swayamsevak Sangh (RSS) were assuring its supporters that a favourable solution to the Ayodhya dispute will come from the court, with some overtly confident minister claiming that the Supreme Court “is ours” (read of the Hindus), gave a primary impression that there is an obnoxious agenda and it was evident that the Supreme Court’s verdict will favour a Ram temple at the disputed site in Ayodhya.

Former Supreme Court judge Ashok Ganguly critically examined the Ayodhya verdict and expressed his dissatisfaction. He told the press that there was a mosque (Babri Masjid) there at the disputed site in Ayodhya when the Constitution came into being in November 1949 and Namaz was offered there. Justice (retd) Ganguly said, “A place where namaz is offered, if that place is recognised as a masjid, then the minority community has the right to defend its freedom of religion — a fundamental right guaranteed by the Constitution”.

Reiterating that it’s injustice done to the Muslim community, Ganguly said that “minorities have been wronged” by the Supreme Court’s Ayodhya verdict. He said as there is no possibility of recreating history, the Supreme Court should have limited its justice within the ambit of the Constitution and not in the past when the Republic of India didn’t exist. He expressed his apprehensions that the notorious Vishwa Hindu Parishad (VHP) and the Bajrang Dal can now tear down any mosque using the pretext of the judgement by claiming it was built on a demolished temple.

Justice (Retd) Markanday Katju, who is a vocal critic of the Modi regime and some of the BJP’s policies, did a critical analysis of the Supreme Court’s Ayodhya verdict writing: “In substance it has said that might is right, and has laid down a dangerous precedent sanctifying aggression. It is like a bully snatching a kid’s sandwich in school, and the teacher giving a ‘balanced judgment’ by allowing the bully to keep the sandwich, and giving the kid a slice of bread instead.” (sic)

Signing off the article with a critical note, Justice (retd) Katju wrote “After Partition of 1947, demolition of Babri Masjid by vandals, with the connivance of some people, was the greatest tragedy of India.

The Ayodhya verdict says it was illegal, but in the same breath sanctifies it. Well done, My Lords !”

The Supreme Court’s judgement called the demolition of Babri Masjid, done by a feral Hindutva fascist mob led by the RSS and its affiliates like the VHP, the Bajrang Dal and the BJP, with support from the Maharastra-based Shiv Sena, a crime.

In the judgement, the Constitution Bench headed by outgoing Chief Justice of India Ranjan Gogoi, with his successor Justice Sharad Aravind Bobde and Justice DY Chandrachud, known for his progressive standpoint, said that:

796. In the present case, this Court is tasked with an adjudicatory task of unique dimension. The dispute is over immovable property. The court does not decide title on the basis of faith or belief but on the basis of evidence… (sic) (Part P, pp 922)

Having said that, the judgement says:

800. Suit 5 has been held to be maintainable at the behest of the first plaintiff (the deity of Lord Ram) who is a juristic person. (Part P, pp 923)

It means, the Supreme Court is itself vacillating from its stated position by giving faith a higher position in its judgement, whilst it should be only evidence and facts. Thus, when the Supreme Court grants the entire 2.77-acre disputed land to the deity of Ram as a juristic person and orders the Modi regime to form a Board of Trustees within three months, in which the government can even include the Nirmohi Akhada, whose plea was dismissed by the Court, it actually gave the land back to those very forces who have played a crucial role in demolishing the Babri Masjid on 6 December 1992, which the Court called an illegal act.

How can an illegal act be undone in law by handing over the same land, for which the illegal act was committed, to the perpetrators? When the Supreme Court is accepting that there was a mosque — Babri Masjid — at the disputed site when India adopted the Constitution, that the mosque was demolished by the criminals, then how could it not order its rebuilding and play the faith card?

Why did the Supreme Court give faith an upper-hand in the verdict, knowing well that such cases should only be decided upon the merit of documentary evidence? Ayodhya was a civil dispute but became the largest political dispute in the country that claimed thousands of lives. By allocating Modi regime the task of forming the Board of Trustees to build the temple, the Supreme Court mocked its own standpoint on the demolition of the Babri Masjid. It showed that the real purpose of justice vanished from the verdict and it merely became an act to endorse the very crime committed by the Hindutva fascist camp.

It’s merely to strike a balance and show pity to the Muslim community, whose mosque was demolished, the Supreme Court ordered the government to allocate a 5-acre plot to the Muslims to build a mosque. However, as the plot will be allocated outside the disputed site, therefore, it naturally denied justice to the Muslims whose religious structure was demolished in full public view at the same site.

It’s a declared position of the Hindutva fascists that no mosque will be allowed to be constructed in Ayodhya city. Surprisingly, the Yogi Adityanath-led Hindutva fascist regime had renamed the entire Faizabad district as Ayodhya earlier, which has made it easy for the government to now allocate a plot anywhere in the district for the mosque. This, when the entire 68-acre land around the disputed structure was acquired by the Central Government using the Acquisition of Certain Area at Ayodhya Act, 1993, and kept under guard for 26 years, shows how disparity is done with the Muslim community.

This entire landmass may be used for the temple and it will provide immense opportunity to the Hindutva fascist VHP-floated organisations to fill their coffers using the funding for the temple. Unsurprisingly, the government wasn’t condemned for its negligence in providing security to the Babri Masjid, leading to its destruction on 6 December 1992. Thus, the government isn’t even penalised for the destruction of the mosque, rather, led by the very party that demolished the mosque in 1992, the Modi regime can now use the entire plot of 68-acre for its political purpose while providing no support to the building of a new mosque. The Muslims, who lost the Babri Masjid and the land, will now have to shell out money to construct a mosque in the 5-acre plot. A mosque of ignominy it will be.

Even though the Supreme Court has shown extreme urgency in the matter of construction of a Ram temple at the disputed site and gave a three-month deadline, it didn’t give any timeline for the construction of the mosque, leaving the issue at the whims of the Adityanath regime and the Modi regime, who are determined to push the Muslims out of all public space in India.

The critical analysis of the Supreme Court’s Ayodhya verdict shows that the Muslims are historically wronged by the Indian institutions once again and the so-called principles of secularism and equality that the Indian state boasted over, were flushed legally, leaving no room for the Muslims in Modi-fied India. The majoritarian bully won a thumping victory, illegal acts got a subtle endorsement without any ambiguity. This predicts a darker phase for the minority communities in India, who kept faith in the judiciary until the end and believed that the Constitution will protect their rights. The left-out minority will never regain the same faith again.