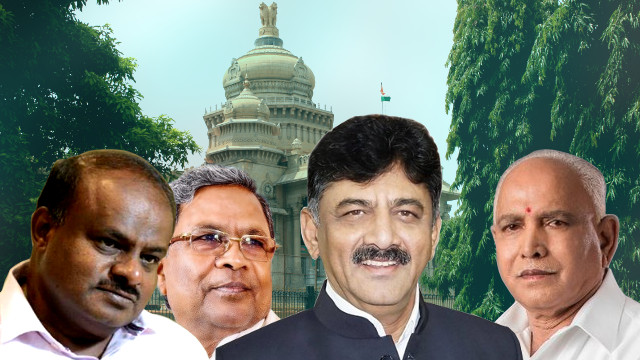 The defeat of the BJP to the Congress-Janata Dal (Secular) alliance in the recently-held Karnataka bypoll for three Lok Sabha seats and two assembly seats shows that an anti-incumbency wave is rising in the country. Narendra Modi is projected as a strong contender for the prime minister’s position in 2019 as well by different opinion polls conducted by big corporate media houses, which, however, is partially put on question by the Karnataka bypoll results. An opposition unity looks like a lethal threat to the BJP’s 2019 ambition.

The victory of the Congress-JD(S) combo in Ballari (unofficially Bellary) is considered a significant victory by the opposition camp as the seat was wrested from the notorious Bellary mining mafia G Janardhan Reddy’s control, which is, of course, a serious setback for the BJP as the party held this territory for long with the support of the G Janardhan Reddy’s money and muscle power.

However, as BS Yeddyurappa’s son BY Raghavendra managed to secure the Shivamogga Lok Sabha seat, which was vacated by his father after his election to the assembly, the BJP could save its face in Karnataka and prevent a major political disaster at a time when other states ruled by it are going to polls.

It’s found that the Congress-JD(S) alliance managed to increase their election victory margin in the constituencies where they won. The victory margin in Ballari is 297,161, while in Mandya it is 324,943. The vote share of the united opposition increased as well, throwing a serious challenge to the BJP leadership.

This widening margin in the Karnataka bypoll can be ascribed to many factors, one of them is the fact that the Congress-JD(S) alliance is ruling the state; however, the important one is that the rising prices of fuel since the Karnataka assembly election and the worsening economic condition of the country has deeply impacted the poor and the downtrodden masses, which eventually translated into anti-incumbency votes against the BJP.

The BJP’s reluctance to put up a strong fight in the Karnataka bypoll just a few months before the general elections also provided a leeway to the Congress-JD(S) alliance. The saffron outfit and its Hindutva fascist allies didn’t toil intensely in each of these five constituencies and it’s suspected that the BJP was actually allowing the opposition to win by heavy margins so that the latter can’t blame the Modi regime of tampering with the EVMs.

Though a large-section of the self-styled liberals, the Congress supporters and the parliamentary opportunist left are expressing their happiness over the defeat of the BJP in the Karnataka bypoll to the alliance of the two key parties of the state and are advocating a nationwide replication of the Karnataka model, especially in Uttar Pradesh, this victory of the Congress-JD(S) in the Karnataka bypoll can’t be correlated to the larger pan-Indian political theatre, where numerous political forces are operating on behalf of or against the Modi regime.

As a cunning politician, Narendra Modi knows well that the public discontent due to the non-delivery of the promise of ‘better days’ will backfire during the 2019 Lok Sabha election. During his 12-year-long rule in Gujarat, Narendra Modi faced severe anti-incumbency waves but never allowed even one to transform into a threat to his hegemony. Rather, by using his liasoning skills, he won the support of all big comprador and crony capitalists, including the access to their purse strings, which allowed the RSS and the BJP to gain immense wealth in the industrially ‘rich’ state and use the fund to saffronise the bureaucracy from the grassroots to the mast.

The BJP and Narendra Modi also managed to win the support of the politically and economically crucial traders’ lobby, merchants’ lobby, the upper-caste urban elites and middle-class to retain a political monopoly over Gujarat. Now that the same forces are ruling all over India with the active support of the big foreign corporations and their crony-comprador Indian lackeys like the Adani or Ambani conglomerates, the saffron camp is unlikely to relinquish power but replicate the same ‘Gujarat model’ to thwart any potential threat and polarise the people to retain power.

Accusations of using the EVM, the Election Commission, the bureaucracy, police and judiciary to win elections have forced the BJP to adopt a different strategy regarding bypolls throughout the country. The RSS and none of its affiliates are ready to waste energy on bypolls like the recently-held Karnataka bypoll. They are utilising their collective energy towards retaining the BJP’s strongholds like Chhattisgarh, Madhya Pradesh and Rajasthan as they are going for crucial assembly elections and also in polarising the Hindus of those states where the BJP and the Sangh remained historical nonfactor for a long time.

Narendra Modi, Amit Shah and the entire Sangh brigade will use the incidents of Gorakhpur, Kairana and Karnataka bypolls to quell any future accusation of malpractices, including EVM hacking, tampering and using money power, muscle power and economic clout to win elections. They will use these bypoll victories of the united opposition as the testimonial of no wrongdoings in the election process, which, however, is a blatant lie. It’s evident that the BJP, with the help of a toothless Election Commission, will be able to outmanoeuvre each of its opponents and manage victory by manipulating the voting system.

The BJP will manage to sweep the 2019 Lok Sabha election unless some unprecedented or unpredicted incident doesn’t happen. The RSS and the BJP have the possibility to win the 2019 Lok Sabha election, not because of the weak opposition, rather due to the support that it’s receiving from the dominant section of the Indian crony and comprador capitalists, the foreign corporations and feudal landlords. The 2019 Lok Sabha poll will be conducted by an officially saffronised bureaucracy and military force, which will aid the victory of the BJP. The EVMs are already found helping the BJP in different parts of the country; the demand of ballot papers isn’t feasible as there can be large-scale looting of votes like the 1990s, which gives BJP a leverage in 2019.

Victory in a few bypolls, like the Karnataka bypoll, isn’t a sign of BJP’s imminent fall. Rather, it’s a sign that the BJP is trying to return back with a sweeping majority by manipulating the people’s mandate and by muffling the dissenting voice. To defeat the BJP, a nationwide people’s movement is required at the grassroots against Hindutva fascist aggression, corporate loot and plunder, communal polarisation and economic crisis imposed on the people’s shoulder by the Modi regime.

Only a people’s movement of the magnitude of the anti-emergency movement of the 1970s can seriously trouble the Modi government and pull it down by changing the political equation in the country. Only a truly democratic, anti-fascist and progressive people’s movement that can mobilise the working class and the peasantry, who collectively are 75 per cent of the population, can actually become a lethal force for the Hindutva fascist Modi regime to reckon with.

Until such a real democratic and progressive opposition to the BJP is built, there can be no respite from the fascist tyranny of Narendra Modi and his coterie. To build up a mass movement of that magnitude, the progressive, democratic, secular and anti-fascist forces need to come together and build up a truly trustworthy alternative to the Modi regime. Without building a nationwide mass movement led by a true people’s alternative, there can be smaller victories like the Karnataka bypoll but no longterm gains against the Modi regime.