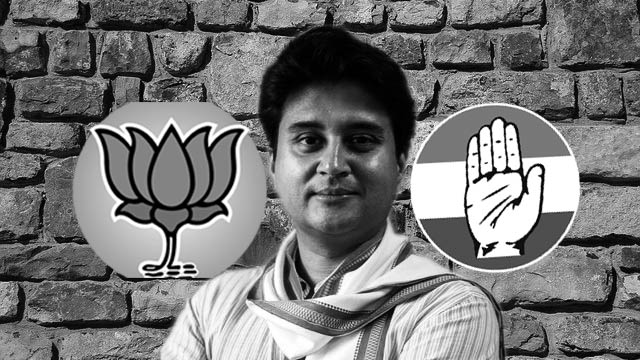 The tragedy of the Congress party-led government in Madhya Pradesh due to Jyotiraditya Scindia’s treachery for some better crumbs from Prime Minister Narendra Modi’s Bharatiya Janata Party (BJP) may have caused the hearts of many so-called liberals, who vouch for secularism of MK Gandhi and Jawaharlal Nehru, bleed. Such somersaults aren’t new in the Congress party, but as Scindia is a royal dynast, from India’s renowned Gwalior kingdom, and as his father has been a loyalist to the Nehru-Gandhi dynasty, so his quitting will eventually be amplified by the press and the rightwing ecosystem. Plus, his defection also caused the collapse of a state government, so it’s discussed more than its face value. But the question is why people like Scindia matter in Indian politics?

History teaches us that the Scindias of Gwalior, the Dogra rulers of Jammu & Kashmir, the Patiala kingdom in Punjab, the various Rajputana monarchies of modern Rajasthan, etc, have been accomplices of the British colonial rulers. The Gwalior kingdom shamelessly stood with the British colonial rulers when the people of northern India, including kings, noblemen, clergy and peasantry, were unitedly fighting colonialism during the Great Rebellion of 1857. This kingdom’s royal members retained their hegemony even when India became an official republic by becoming the members of the Congress and then the Bharatiya Jana Sangh (BJS), which later got rebranded as BJP.

Jyotriaditya’s grandmother Vijayaraje Scindia switched allegiance from the Congress party to the BJS in the early 1970s and remained loyal to the saffron camp throughout her life. Her daughters, Vasundhara Raje, the former chief minister of Rajasthan, and Yashodhara Raje have been lifelong members of the BJP as well. Jyotiraditya’s father, Madhav Rao Scindia, from whom he got his political privileges in the Congress party, remained a staunch BJS man until the late 1970s and switched to the Congress in the 1980s. This Scindia dynasty nurtured the Rashtriya Swayamsevak Sangh (RSS) since the 1930s and the fascist outfit built its network of cadres in the kingdom under the monarchy’s patronage. An utmost feudal dynasty, which remained loyal to the British, roosted the RSS in its backyard, and whose members easily amalgamated with the RSS-led Hindutva ecosystem was nurtured in a political party that claims the title of making India an independent, democratic and secular republic is the worst political joke of all times.

It’s not wise to blame the BJP for doing its job, it’s imperative to look into the culture of dynastic feudal politics of India that gave extreme importance to the members of erstwhile monarchies and allowed them to retain their royal hegemony using a democratic facade. The Indian democracy has been a laboratory of not only toxic Hindutva but also of blending feudal monarchist ideology and power structure with the constitutional system. From the legislative, bureaucracy to the judiciary and even the press, everywhere the former monarchs, nobles and the top-ranking officials of such monarchies or their descendants ruled.

Opposing dynastic politics and taking a potshot at the Congress for being a slave to the Nehru-Gandhi dynasty, Modi’s BJP didn’t fare well in its own record. Not only did the son of Amit Shah, the number two man of the regime, multiply money through dubious trading, but without playing any real cricket he became the top man of the Indian cricket board. The son of Vasundhara Raje is a top BJP leader, so are the sons of many other BJP leaders. Even Anurag Thakur, the feudal dynast-turned-minister, accused of raising the infamous “shoot to kill” slogans during the Delhi Assembly election campaigning, is the son of a former chief minister of Himachal Pradesh. Pravesh Singh Varma, accused of raising the same slogan, is also the son of a former Delhi chief minister. A large number of such stories exist and they make the BJP an ideal duplicate of the Congress party, albeit with a visible cow and trident.

The scions of the established political dynasties of Andhra Pradesh, Bihar, Chhattisgarh, Haryana, Madhya Pradesh, Maharashtra, Meghalaya, Punjab, Rajasthan, Tamil Nadu, Uttarakhand and Uttar Pradesh not only command a great influence in the BJP or the Congress party but they also thrive in the provincial parties and those that talk of social upliftment of backward classes like Lalu Prasad Yadav’s Rashtriya Janata Dal, the M Karunanidhi’s Dravida Munnetra Kazagham, Asaduddin Owaisi’s All India Majlis-e-Ittehad-ul-Muslimeen or the Samajwadi Party of Mulayam Singh Yadav and Akhilesh Yadav. Why this phenomenon is prevalent in India? The reason is rooted in the socio-economic condition of the country. As a semi-colonial and semi-feudal state, which never got the real taste of freedom even when the British colonial rulers gave up their direct rule; the Indian people were never remoulded in a democratic spirit, they were not tempered in the flames of republicanism because the founders of the Indian state were feudal landlords, big comprador capitalists and usurers, much of whom got access to power and position due to their caste and class privileges and none had to struggle from the grassroots sans resources.

The likes of Scindia come to politics and make a kill due to their hegemonic socio-economic position and not due to their extraordinary political knowledge, organisational skills or ability to strategise victory for their parties. His switch to the BJP will not cost the Congress organisationally, but indeed it will harm its political prospects in the Guna Lok Sabha constituency, in the Gwalior region and wherever the Scindias have their influence as a monarchy. The votes these former monarchs gain is not through any faith reposed in them by the people, but due to the loyalty of the feudal landlords and local usurers, who command the votes of the poor and landless peasantry, who are dependent on them economically and are also the majority of the rural population.

In a class-divided society, where a minority exploits the labour of the majority and enjoys all privileges by monopolising the control over them, nepotism will thrive and so will dynasty. None of the players in the rightwing parliamentary league will be able to do away with dynastic politics. It’s in the DNA of the entire feudal-comprador political system. For now, one may blame the BJP or Scindia for bringing down the Congress party’s rule, but then one must also not forget why such extreme right-wing feudal monarch was in the Congress party, which is now wearing a progressive mask, at the first place? As a party of feudal landlords, comprador capitalists and usurers, the Congress paved way for the BJP and both of them, along with the regional parties allied with either of them, overtly or covertly, have made mainstream politics a fiefdom of such classes. It’s infantile to harp the hope of emancipation from Hindutva fascism on parties that have such bigoted, ideologically hollow opportunists who are prone to switch camps at the slightest luring.

To counter them and to really defeat Hindutva fascism, it’s imperative to develop an alternative space for people’s politics, which will have a strong anti-fascist ideology and grassroots connection. Unless the democratic forces stop considering the Congress party or other such political parties from where the BJP buys its manpower, as an ally in anti-fascist movement, there can’t be any real step taken towards defeating Hindutva fascism. The beginning of the fall of Hindutva fascism will happen only when the class-relations, the production relations that give rise to the power structure in which the Scindias and the Gandhis, the Rajes and the Shahs thrive, their dynasties prosper, their hegemony prevails, is targetted and altered through effective and focused intervention. It’s only under the leadership of the exploited and oppressed section of the marginalised people that this task can be accomplished. Unless that’s done, a large number of Scindias and other dynasts will lampoon the common people, who fill their coffers with their labour, sweat and blood.