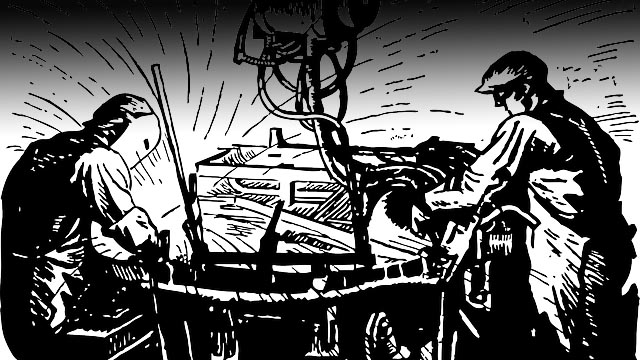 There was never a better time than this when Prime Minister Narendra Modi’s Bharatiya Janata Party (BJP) could prove its slavishness with so much vigour to the big foreign monopoly-finance capital-owned corporates and their Indian crony-comprador lackeys. Under the garb of combating the Coronavirus (COVID-19) menace, the Modi regime and the BJP have launched a war against the working class of India, to ensure the rich donors of the saffron camp continue to flourish, while the poor perish under the grinding wheel of grotesque economic exploitation. The BJP’s assault on labour rights through revocation of labour laws in states like Gujarat, Karnataka, Madhya Pradesh and Uttar Pradesh is one of the goriest atrocities against the working class, which even the colonial British rulers didn’t dare to launch.

The BJP’s assault on labour rights isn’t an isolated or a surprising phenomenon. Since coming to power in 2014, Modi has been liquidating the legal safeguards and rights that the working class won for itself through incessant class struggles since the colonial era. The Modi regime is doing exactly what the prime minister’s sponsors installed him on the throne for. Earlier, the Modi regime began its attempt to dismantle the Indian labour laws and replace them with anti-worker codes, which would allow capitalists an opportunity to exploit the workers without any obligation towards them. The Modi regime has been also trying to reduce the minimum wages, under its much-hyped “labour reform” drive. But, the advent of the COVID-19 global pandemic and the subsequently forced lockdown gave an unprecedented opportunity to the Modi regime to not just snatch the existing rights of the working class, but also to ensure that an undeclared emergency is imposed and a reign of panic is established to prevent any organised labour movement against these ghastly measures.

On April 17th 2020, the pro-BJP Gujarat Chamber of Commerce and Industry’s (GCCI) delegates pleaded with the Union labour ministry to ban the formation of labour unions for one year in view of the COVID-19 and the lockdown. A report by journalist Niyati Parikh in the Ahmedabad edition of The Times of India on April 18th 2020, cites the GCCI representatives complaining that the labour unions are ‘blackmailing the factory owners’ and ‘threatening industry with the law’. These became their excuses to blatantly demand the constitutional rights of the working class be done away with. For some unknown reason, The Times of India didn’t publish the story on its website.

This sermon from the GCCI wasn’t a fringe affair. The GCCI was echoed by the founder of Infosys, NR Narayana Murthy, who advised the Indian workforce to toil for 60 hours a week to revive the economy. Then the big capital continuously demanded the right to slash the wages of the working class, the right to suspend all labour rights that are mostly enjoyed by the organised workers, who are only 10% of the Indian labour force. Around 90% of India’s 500m-strong labour force is in the informal sector, devoid of any rights and are aloof from any legal protection from exploitation.

To appease these big capitalists, Hindutva fascist rabble-rouser Yogi Adityanath’s regime in Uttar Pradesh suspended the labour laws for a period of three years in the state. As per the ordinance brought by Adityanath’s regime, only the laws like Building and Other Construction Workers Act, 1996, Workmen Compensation Act, 1923, Bonded Labour Act, 1976 and Section 5 of the Payment of Wages Act, 1936, which deals with the right of a worker to timely wages, will remain in force during this period. All other laws – including laws regarding minimum wage, right-to-union, contract labour, health and working conditions, dispute settlement, pensions, etc, – won’t apply. Though Adityanath is lauded for this act by the corporate world, this report in Financial Express, published on May 9th 2020, suggests that the capitalists want such exemptions and amendments to be permanent, so that nothing can inhibit them from sucking the last drop of blood of the working class.

Similarly, the Madhya Pradesh government under table-turner Shivraj Singh Chouhan, whose attempt to topple an elected Congress government in the state stopped Modi from declaring a lockdown before March 24th, also brought similar relaxations to its labour laws and regulations. Now a plethora of industries can deny their workers right to use a toilet and the right to eat food. This will embolden the big capital, allied with the middle and small capital-owned units in the state, to oppress the working class severely during the lockdown, as the unemployment rate has reached an unprecedented level. In the month of April 2020, the unemployment rate was 23.5%, which is in itself an all-time-high. A large number of migrant workers are returning to Madhya Pradesh and the state government will quarantine them before using them as robots in the modern factories.

The BJP’s assault on labour rights isn’t just limited Uttar Pradesh and Madhya Pradesh, but states like Karnataka, Uttarakhand, etc, are introducing new ways to allow the big capital exploit the working class. Even states ruled by the non-BJP parties like Andhra Pradesh, Punjab, Rajasthan, Telangana, etc, are diluting their labour laws to serve big capital. The big corporate houses are lauding the BJP’s assault on labour rights and calling these measures necessary reforms that will unleash the development and speed-up economic growth. But the question is when in India did the much-celebrated economic growth engine bring transformation in the lives of the poor? Unless it’s for the worse? Unless it’s to evict them from their water, forests and land?

According to an Oxfam report, India’s richest 1% hold more than four-times the wealth held by 953m people who form the bottom 70% of the socio-economic pyramid. Who will benefit from this economic growth? The poor workers, who were forced to flee an inevitable starvation death in Indian cities – where they work – by walking for hundreds of miles to their native places, as the government announced a lockdown without considering their plight because it was keen to safeguard the interests of the rich and the upper-middle class society? Are these workers going to gain anything by working for unending hours, stripped of their minuscule rights and even basic human dignity?

Can the big corporate houses, the big crony-comprador capitalists, who have since plundered India’s resources to stack their coffers and got bailouts from the taxpayers’ hard-earned money, sacrifice their incomes by voluntarily opting for a pay-cut to the extent of at least 50% per month for a period of not less than three years and donate the rest of the money to Modi’s dream project Prime Minister’s Citizen Assistance and Relief in Emergency Situations Fund (PM CARES Fund)? These capitalists have been making symbolic donations to the PMCARES Fund, especially at the expenses of their employees, and hyping such incidents through their PR mechanism. Now is the time that they really exhibit their “philanthropic” character, which they religiously mention in their profiles on LinkedIn.

If the super-rich 1% can take a 50% pay-cut and work 72 hours a week while donating the rest of the money for the wages, social-security and medical insurance of the workers, then the country will be able to get out of the crisis faster than what experts could anticipate. But the capitalists won’t do this. Modi won’t force them to shell out money for the wellbeing of the working class and the BJP’s assault on labour rights will continue unabated because the core driving force of capitalism is the quest for maximum super-profit appropriation, which no capitalist can give up. The only people who will suffer the cuts are the workers, the government and non-government employees, and the toiling masses. Still, if there was a visible and quite assertive labour movement at the grassroots and considerable effort was taken by the labour leadership in organising the working class against the capitalists and their servile BJP, then a movement forcing the big capital to part away with the huge perks offered to the richest of the rich could have been realised.

If the BJP’s assault on labour rights show anything to us in this juncture then it’s the failure of the labour unions and organisations that claim to represent the cause of the working class. These organisations have ignominiously failed to innovate new methods of struggles to force the government and the big capitalists retreat from their onslaught. To ensure the working class survives and its rights are protected, the central trade unions should’ve called for a countrywide agitation against the BJP’s assault on labour rights and its apathy towards the workers stranded in different cities since the last 45 days. But they didn’t. Their lack of vigour and vitality at this crucial juncture shall be remembered as an act of betrayal.

The BJP’s assault on labour rights won’t end soon. These labour law amendments won’t be revoked in the future. These are long-term attacks on the working class and nothing else but a vigorous movement by the affected workers can turn the tide in their favour. Forcing the workers to bear the brunt of the economic catastrophe caused by the greed and lust of capitalism isn’t justified, like anything else under the reign of capital. It’s the capitalists who must pay for their crimes and for forcing the world into a sheer depression. It’s time for the labour movements to encircle the big corporate capital and force it to forego its booty. Unless there is a labour movement that can utilise the occasion and bring forth an end to the tyranny of the big corporate houses, the COVID-19 pandemic context will be used repeatedly by the big capitalists for years to suppress the working class under its juggernaut of inhuman exploitation.