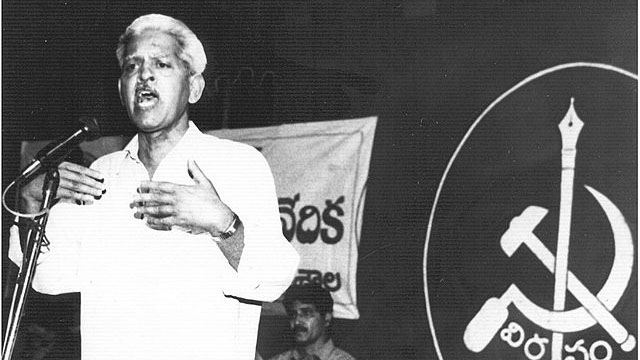 While the Indian mainstream press is incessantly broadcasting the news of Hindi film actor Amitabh Bachchan’s COVID-19 infection and treatment, there has been a conspicuous silence over the condition of Varavara Rao, a 79-year-old revolutionary poet and activist who sulked in his prison cell in Maharashtra’s Taloja Jail. It was only after Rao’s wife P Hemalatha and daughters organizing a press conference through Zoom Meeting app on Sunday, July 12th, that there has been a little coverage of his gloomy condition behind the bars, which forced the National Investigation Agency (NIA), which is controlled by the Union government led by Prime Minister Narendra Modi, to take him to Mumbai’s JJ Hospital for treatment on Monday night, and some basic tests have been conducted at the time of writing this report. Earlier too Rao was admitted in the JJ Hospital but was discharged on June 1st even before he fully recovered. The inhuman condition in jail is deteriorating his health.

Vernon Gonsalves, a prominent intellectual who is Rao’s co-accused and co-inmate, told the poet’s family on Saturday, July 11th, over a telephone call that the poet is hallucinating and is unable to even brush his teeth. This rang an eerie alarm and the poet’s family started reaching out to the press and the government. Apart from Rao’s wife and daughters, intellectuals like Romila Thapar, Prabhat Patnaik, Devaki Jain, Maja Daruwala and Satish Deshpande signed a petition to the government, urging it to take steps to get Rao treated in Mumbai’s JJ Hospital. The Telangana Forum Against Oppression also appealed to the Maharashtra authorities to ensure Rao is kept in the hospital until his treatment is fully over.

Rao is accused by the NIA of abetting the caste violence in Bhima Koregaon, near Pune, on January 1st 2018. The NIA has framed 10 activists, lawyers and intellectuals in a dubious case of plotting the murder of the prime minister. The erstwhile Bharatiya Janata Party (BJP) government in Maharashtra cooked up these charges to arrest and imprison activists from all over India, and the NIA has been in cahoots with the party. The change of guard in Maharashtra in October 2019 didn’t change the fate of these inmates as the Shiv Sena-Nationalist Congress Party-Congress party government didn’t want to irk the BJP. A writ petition from Thapar and others–– Romila Thapar & Others Vs Union of India & Others, Writ Petition 32319 of 2018––is still pending in the Supreme Court since the last two years, while these vocal critics of the government continue to languish behind the bars. Ironically, the cases of Ayodhya dispute, Modi’s lackey Arnab Goswami’s plea, etc, got fast-track hearing and resolution vis-à-vis writ petitions like this.

Despite cooperating with the NIA for 22 months, the agency is still persecuting the poet and other prominent activists, intellectuals, lawyers, etc, in the Elgar Parishad case. The botched up charges, the fake evidence like a letter written by some “Comrade M” of the Maoist party, etc, show how much the state machinery and the BJP government despise these critical voices and how, by trying to gag them, there is an attempt to suppress the truth. But the mainstream press, which is busy informing the audience about each trivial detail of Bachchan’s health, his diet, etc, considers silence on this issue, on the issue of Rao’s fragility and the threat to his life, as pure gold. Rather than standing for the rights of Rao, and other inmates framed by the NIA, rather than demanding the unconditional release of all political prisoners lodged in India’s jails, the so-called democratic press either follows a tight-lipped policy or vilifies such people who fought all their lives for the rights of others.

Due to the mainstream press’s conspicuous silence on the plight of Rao and his co-accused, their story couldn’t find any place in India’s mainstream discourse. The mainstream press’s revenue is dependent on the advertisements that come from corporates, and these corporates target the upper-caste Hindu elites and urban middle-class Indians as their audience. Therefore, the press creates content that titillates these classes and blunts their ability to critically think or analyse facts. Hence, for these sections of the society, where the majority lives on labour appropriated from others and parasitic in nature, the plight of Rao and other such political prisoners cut no ice. The 200-million-strong Modi supporters of India command the dominant narrative and the media amplifies their voice only. Expecting them to raise the issue of Rao and other left-wing and anti-fascist fighters for socio-economic equality and justice will be an infantile wish.

The state has decided to kill the arrested activists one by one and to destroy their morale by keeping them as undertrials for years behind the bars so that their ability to independently think can be blunted with incessant mental harassment and torture. The inhuman condition of the jails during the COVID-19 pandemic is known well by many, and even the governments of different states have allowed mass amnesty for hardened criminals. But these activists arrested for the Elgar Parishad case, the activists arrested by Delhi Police on false charges of instigating Delhi’s anti-Muslim pogrom, and other political prisoners languishing in the Indian jails remain condemned even without a trial. They are treated worst than a convict.

It’s an urgent task for all democratic and anti-fascist forces to demand not only proper treatment for all inmates lodged in Indian prisons but also to raise the demand for the unconditional release of all political prisoners who are thrown behind the bars to satiate the blood-lust of the Modi regime and the BJP’s zealot supporters. The movements against these falsified cases and charges should be intensified and the people’s media must come forward to amplify the voice of these movements. The demand for scrapping all cases against the political prisoners and a strong movement, from the grassroots, aligning with the mass struggles against privatisation of coal mines, railways, public sector enterprises, bank crisis and the Hindutva fascism’s juggernaut must combine to give a lethal strength to people’s democratic movement and to bring the change the people want to see. Only then can we save people like Rao and others.