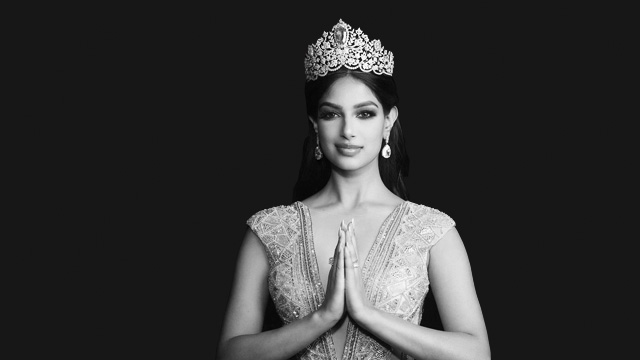 India got another Miss Universe after 21 years as Harnaaz Kaur Sandhu becomes the first Sikh woman to win the title at the 70th edition of the beauty pageant held at Eliat in the Zionist-occupied Palestinian territory. Earlier, Lara Dutta won the title in 2000 and Sushmita Sen had won it in 1994. Though Sandhu’s achievement has caused jubilation among many, especially elite and middle-class Indians, who happen to be the largest consumers of colour cosmetic and beauty-related products, it has also raised some disturbing ethical questions.

Though such beauty pageants have been criticised for decades by feminists for objectifying a woman’s body and defining “beauty” strictly according to the patriarchal notion, this year, the Miss Universe contest came under sharp criticism for choosing the Red Sea resort town as a venue.

The Palestinian Campaign for the Academic and Cultural Boycott of Israel (PACBI), which also runs the worldwide anti-Zionist Boycott, Divestment, Sanctions (BDS) movement, had criticised the Miss Universe contest at Eliat. The PACBI wrote: “Israel’s far-right apartheid regime is trying to exploit its hosting of the international Miss Universe beauty pageant in a desperate attempt to polish its tarnished image and cynically portray itself as a ‘tourist destination’ rather than a militarised occupier state.”

Around 80 contestants from different countries joined the Miss Universe contest at Eliat. Previous Miss Universe, Andrea Meza of Mexico, who crowned Harnaaz Kaur Sandhu as per the tradition, had earlier asserted in an interview to The Associated Press that the pageant wasn’t a place for politics. “Everyone with different beliefs, with different backgrounds, with different cultures, they all come together and when you are in there you forget about politics, about your religion”, Meza, 27, had commented, in a frantic bid to cover up Zionist crimes against women, children and humanity for the sake of her corporate contracts and future career.

Though several self-styled western ‘feminists’ call the beauty pageants as platforms that empower women, these platforms have been working only to provide capitalism with an opportunity to earn higher profits by selling colour cosmetics and beauty products to aspiring women, who consider modelling and titles like Miss Universe keys to liberation. Rather than empowering women, these pageants, sponsored by big corporations, end up helping capitalism, a patriarchal system, enslave women by creating a huge need for beauty products.

Amid the pandemic in 2020, when most industries have experienced a global contraction due to a steep fall in demand, the global colour cosmetic industry had a market size of US $68.41 bn. The market declined by 5.2% in 2020 vis-à-vis the year-on-year growth during 2017 to 2019. The global colour cosmetic market is projected to grow from $70.33 bn in 2021 to $90.76 bn in 2028. While an increasing number of beauty influencers on social media platforms like Instagram and YouTube have played a key role in driving up sales, the rising income of the propertied elites and urban middle-class in the developing countries, especially the global south, has also helped in the growth of the category. Aspiration plays an important role in this market.

Neither Miss World title winners like Reita Faria (1966), Aishwarya Rai (1994), Diana Hayden (1997), Yukta Mookhey (1999), Priyanka Chopra (2000), Manushi Chhillar (2017), nor Miss Universe title winners like Sen and Datta had done anything remarkable to empower Indian women, who suffer due to gender discrimination at all spheres of life, especially gender wage gap. None of these celebrities had taken any political standpoint, shown any solidarity to the women who fight for a dignified life with equal rights for the gender in India.

The Indian colour cosmetics market is valued at $13.19 bn in 2020, ie, 18.75% of the global market size, and is forecast to grow at a double-digit compound annual growth rate (CAGR) of 16.39% through 2026 to reach $28.99 bn. The burgeoning 300m-strong aspiring middle-class population out of a total 1.4 bn population, happens to be the driving force behind this growth. This CAGR projection shows why the global beauty product giants want India.

No wonder, Harnaaz Kaur Sandhu, the 21-year-old from Chandigarh, who earlier won the Miss Diva Universe 2021 and has been an actor and model, will follow her predecessors and build a career in the Hindi film industry while promising to work as an ambassador of development and women empowerment. The cliché mongering by the contestants in these pageant shows, about bringing social changes and uplifting women through education and healthcare, ebb away quickly, once the event is over.

Sandhu belongs to a Sikh family, which had its roots in Kohali village, Batala in Gurdaspur, Punjab and lives in Mittal Apartments in Shivalik City on Kharar Landran road in Sector 125, Chandigarh. While farmers of Punjab participated in a prolonged struggle against Prime Minister Narendra Modi’s three contentious farm laws, unlike other Punjab-based celebrities, Sandhu remained tight-lipped regarding the political turbulence.

Even though the Sikh community remained at the forefront of the struggle against Modi’s tyranny, the daughter of Punjab remained quiet to stay out of political trouble. Though many will say a 21-year-old need not have a say on everything under the sky, Sandhu’s hobnobbing with the Zionist diplomats in Delhi, especially her association with the Zionist “charitable” projects in healthcare to whitewash the gross human rights violation in Palestine, raises doubts about her apparent neutrality in political and world affairs.

Prime Minister Modi and his Bharatiya Janata Party (BJP)—led by the Rashtriya Swayamsevak Sangh (RSS), the fountainhead of global Hindutva fascism —have strong and unapologetic ties with the Zionist terrorist regime. The RSS wants to emulate the Zionist occupation template in India and officially establish a pro-corporate, theocratic dictatorship of the upper-caste Hindus, buttressed by feudal landlords, which will eventually subjugate the minorities, including the Sikhs, along with the marginalised and the ostracised Dalit community.

The Sikh farmers of Punjab, who remained at the forefront of the farmers’ protest movement, have been called “Khalistani” separatists by the RSS-led Hindutva ecosystem. They suffered brutal atrocities unleashed by the state machinery when the farmers carried out a tractor march in New Delhi on January 26th 2021, during which a group of farmers hoisted the sacred Nishan Sahib of the Sikhs atop the iconic Red Fort.

The farmers, especially the Sikhs, were further vilified by the Hindutva fascist camp and its servile media houses for this daring act. The amount of anti-Sikh hatred that the RSS and the BJP peddled to discredit the farmers’ protest movement, matched the vitriol against the community that led to the Sikh genocide of 1984.

The anti-Sikh genocide was organised in November 1984, when former prime minister Indira Gandhi was gunned down by two of her Sikh bodyguards to avenge the ‘Operation Blue Star’, a military operation that took place in Amritsar’s Golden Temple—a sacred Sikh shrine—under the guise of flushing out militants who were hiding there but ended up killing hundreds of pilgrims.

Gandhi’s Congress party and her son Rajiv Gandhi were accused of orchestrating the state-sponsored anti-Sikh genocide in November 1984, which killed thousands of Sikhs throughout India. The RSS, which otherwise opposed Gandhi, participated as an appendage of the Congress party in the massacre and enabled the persecution of the minority Sikhs, a charge that the saffron camp now vehemently denies.

The same RSS is an ardent fan of the Zionist terrorists. The Modi regime’s pro-corporate and anti-farmer policies have intrinsic ties with the RSS-BJP’s nefarious nexus with the US, its western allies and the Zionist terrorists. Since coming to power in 2014, Modi has unapologetically distanced India from Palestine and its cause of liberation, which even utmost reactionary statesmen like Indira Gandhi supported, at least in words. The bonhomie between Modi and former Zionist prime minister Benjamin Netanyahu is infamous. The Zionist forces are one of the biggest weapon suppliers of India and the Modi regime has opened the doors to cooperation in the fields of technology and agriculture with Tel Aviv.

The collaboration between Indian and Zionist forces on agriculture, defence, technology and other areas makes New Delhi a major partner of the Zionists in the global south as well as in the world. The ideological alliance between the Zionist forces and the Hindutva fascist camp has not only pushed the Palestinians under the bus, but it has also brought technologies like Pegasus in India, which had been allegedly used to snoop on activists, journalists and politicians critical of the Modi regime.

Due to a steep rise in crimes against humanity committed by the Zionist terrorists, unlike India’s Modi regime, many governments still don’t recognise it or have snapped ties with Tel Aviv. South Africa, which remains a staunch supporter of the Palestinian liberation cause, withdrew support for its Miss Universe contestant Lalela Mswane, who participated in the event despite calls for a boycott.

South Africa’s first black president Nelson Mandela’s grandson, Mandla Mandela, supported the boycott call of the Zionist terrorists under the BDS due to the “occupation and cruel treatment of Palestinians at the hands of apartheid Israel regime.” US-occupied Iraq’s Miss Universe contestant of 2017, Sarah Idan, appearing ignorant about the gory atrocities committed by the US imperialist forces and the Zionist-funded terrorists in her country, lambasted Mandela on social media, calling the Miss Universe a platform of “women empowerment”, which exposed how such pageant shows brainwash women and turn them into servile tools of capitalism.

From Asia, Indonesia and Malaysia, two Muslim-majority countries that take part in the pageant, didn’t send any representative, though they cited the COVID-19 pandemic and lack of time as issues. The General Union of Palestinian Women applauded them for the “boycott” of the event.

Africa’s Muslim-majority Morocco, for the first time since 1978, also sent its contestant Kawtar Benhalima to the pageant in the Zionist occupied territory. However, Rafaela Plastira, Miss World Greece 2019 winner, went against the tide and vehemently criticised the Miss Universe contest held in Eliat. She criticised the participants for their indifference towards the Zionist crimes against humanity in occupied Palestine. Plastira had to face harsh criticism from the Star GS Hellas that sent Sofia Arapogianni for the Miss Universe 2021 from Greece.

The crowning of Harnaaz Kaur Sandhu as Miss Universe 2021 not only exemplified how global beauty and cosmetic brands are drooling to expand their markets in India, by exploiting the desire of the aspirant women from affluent backgrounds to look beautiful as per the patriarchal definition of the term, it also exposed how the Modi regime and the Zionist terrorist regime have strengthened their fascistic ties over years.

On one hand, the Sikh farmers of India’s Punjab are celebrating their initial but major victory against the pro-corporate, Zionist ally Modi regime, on the other, the affluent elites and middle-class are celebrating Punjab’s Sikh girl Harnaaz Kaur Sandhu winning the Miss Universe 2021 title, in the Zionist occupied territory, where the blood of innocent Palestinians has been spilt in galore since years. The days to come will show which India will win and which one will lose in this confrontation. Until then, beauty shall lie in the eyes of the beholder.