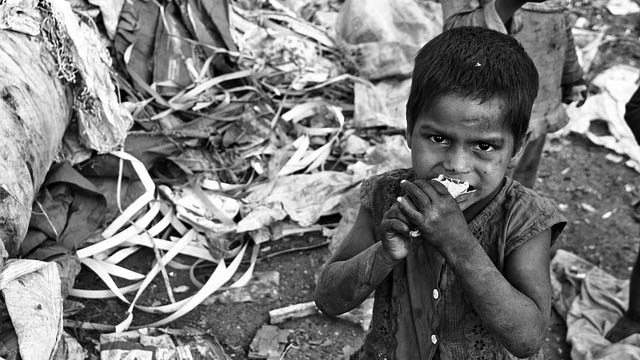 India’s ranks 102nd in the Global Hunger Index among 117 qualifying countries. India has a score of 30.03, which means it suffers from a “serious” level of hunger. India’s score is the lowest in South Asia and it’s only above neighbouring Afghanistan (108th) in the list. Neighbouring Bangladesh ranks at 88 and Prime Minister Narendra Modi’s punching bag Pakistan ranks 94 in the list. This fall in ranking to 102 in the Global Hunger Index was cited by those critical of Modi’s tyrannical rule on 16 October, which is, ironically, celebrated as World Food Day.

The United Nations’s Sustainable Development Goal has “zero hunger” as one of the key goals. India, which is now pursuing lunar mission spending billions of rupees, or providing excessive tax exemption to the richest of the rich, has no money to strengthen its public distribution system (PDS) and provide adequate food grains at a subsidised rate to the poor and the needy. Moreover, with an economic crisis that has tightened its grip on the economy and unemployment at its 45-year-peak, it’s evident that hunger will expand its net and engulf more people.

It’s an irony that despite having 194 million starving people in the country, 40% of the food produced in India goes waste. According to the Agriculture Ministry, food worth Rs 500 billion goes waste every year and this isn’t merely at the consumption stage but from harvesting, transporting, storing, packaging to cooking and consumption, in all these stages food is wasted.

Under such circumstances, despite boasting of food security, India is unable to meet the hunger eradication goal. One of the principal reasons behind this is the rapidly growing wealth inequality in India. With 1% rich owning 73% of its wealth and nearly 50 families owning 50% of its wealth, the access to food gets highly restricted in India, stratified by antagonistic class, compartmentalised castes and cocooned communal blocks. It’s not only the urban and rural poor but even those at the lower-bottom rung of the middle class, too, face the brunt when it comes to food.

Even the food-producing farmers aren’t immune to hunger as more than 82% of Indian farmers are either small or marginal farmers. The rural agricultural labour force, ie, the landless peasants, also live in semi-starvation even when the country keeps increasing budget allocations for building tall baroque statues of those whom the ruling dispensation, hold in high esteem. Rs 40 billion spent behind Modi’s advertisement campaigns alone, yet no one ever pays heed to the problem of hunger.

As India’s ranking drops in the Global Hunger Index, the problems of malnutrition and diseases related to the menace will subsequently increase. With a sheer lack of good public healthcare service, the unavailability of funds for food and nutrition research, the sheer apathy of the present regime towards the PDS and rationing of food items to the needy families and the constant cuts in subsidies following the diktats of the World Bank and the International Monetary Fund (IMF), it’s unlikely that the prevailing hunger situation in India will be resolved. There are more chances that from the present ranking India may skid to the alarming section, which may trigger massive rural and urban food crisis and fuel social unrest. However, the nonchalant government, busy in serving the big corporate honchos and implementing the World Bank and the IMF’s agenda, has got no time to delve into the issue of hunger.

The toady press that amplifies the Modi regime’s propaganda in a more dangerous way than the Rwanda Radio, didn’t even dare to discuss the issue of India’s ranking in the Global Hunger Index and its continuous fall. Rather, on the occasion of World Food Day, they offered their paid columns to corporate houses to talk about the importance of nutrition and harms of junk food consumption, ignoring the fact that 194 million people in India, more than Bangladesh’s population, suffer from sheer hunger.

There can’t be any solution to this threat unless the issues of inequality and wealth distribution created by the neo-liberal economy aren’t addressed through affirmative revolutionary actions. It’s only by addressing the issues like land reforms, better access from the farm to the fork, the equitable distribution of wealth and considerable public spending on the welfare of the working class and the farmers that the situation can become better. Until then the fall of India from one level to another in the Global Hunger Index will mock Modi’s rhetoric and tall talk on development.