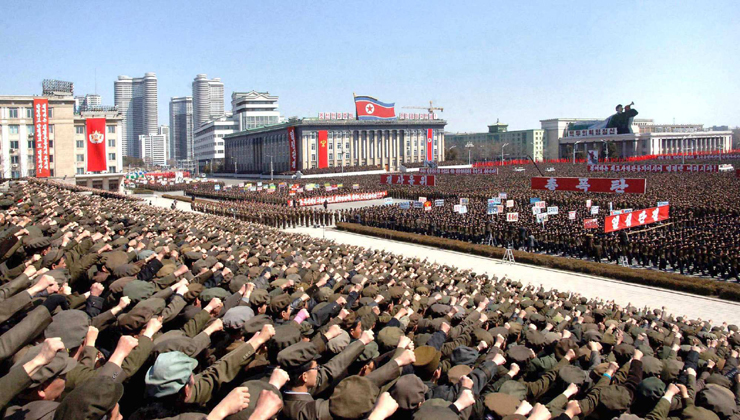 At the insistence of the US government, which has stationed large number of troops in the Korean peninsula, the puppet government in Seoul has launched a vicious campaign to escalate military tensions with the Democratic People’s Republic of Korea, also called North Korea. The US sponsored South Korean troops at the Demilitarized zone, which divides the country since the armistice was concluded between the socialist North and US colonised South in the 1950’s, after a humiliating defeat of the US army in the hands of the Korean and Chinese forces; has irked the DPR Korean forces and incited a war like situation.

On Thursday, 20th of August, the DPR Korean and South Korean forces exchanged volleys of fire, igniting the sparks of a greater war, which the US government is keen to see, to eliminate another government that it calls a part of ‘axis of evil’ and its corporate controlled world media runs slander campaigns against. The DPR Korea is the most isolated nation of the world, that is surviving despite long term sanctions and trade embargos imposed on it by the US administration and its allies. Throughout the world, the corporate media houses, led by the likes of Rupert Murdoch, carries on relentless slander campaigns against DPR Korea (North) with an intention to malign the leadership of the small country who dare the hegemony of the US and make the people believe that the DPR Korea is a country full of violence, intolerance, tyranny and autocracy. The classical campaigns that the US media is expert to run against any government, which does not toes the line of the US and surrenders before its endeavour for global hegemony, be it an Arab country like Iraq under Saddam Hussein, Syria under Baath rule, had been used in the case of the DPR Korea as well.

Though the Korean leadership of the ruling Worker’s Party has implemented several peace solutions and ensured that the People’s Army of the DPR Korea is restrained from retaliating to the incitement by the South Korean and US forces, the US led coalition has repeatedly tried to ignite the flames of a regional conflict in an area where the US has deep interests due to its proximity with China.

On the 20th August, when the South Korean forces restarted their slander campaign on high pitch, using loudspeakers to dissipate hate messages against the DPR Korea and its leadership, despite several requests and warnings from the DPR Korean forces, the People’s Army of DPR Korea strictly warned the Seoul controlled US puppet forces to refrain from making any derogatory statements. In response, the South Korean forces started firing mortars at the DPR Korean People’s Army positions across the Demilitarized Zone (DMZ). The DPR Korean People’s Army retaliated by firing mortars towards the Southern forces commanded by the US. The US controlled corporate and mainstream media of the world, the corporate controlled international news agencies, and the US army itself started milling Goebbels styled propaganda campaigns to dissipate lies and fake tales to garner support for its war efforts against the Pyongyang government.

Just a day after the volleys of fire were exchanged, the news media of the world, irrespective of their hues and pledge of loyalty, started publishing fake stories about the DPR Korea, following the line of malicious campaign fixed by the US ruling clique. They blamed the young President of the DPR Korea for the military tensions, called him war monger and started their usual spiteful character assassination drive against the leader of a nation that is fighting for its sovereignty since last six decades from the clutches of the aggressive US military that wants to turn the DPR Korea into its colony and war base against the China for the future.

Despite all tall claims of peace and tranquillity, the Democrat administration of Obama, is nevertheless a violent and psychopath government, undifferent from the previous regime of Clinton and Bush, and is keen to destabilise the nations that does not wants to be a satellite state of the US and allow it to plunder its resources and manpower. The Obama administration is the culprit for the agony of the people suffering under the ISIS jackboots, as this government funded and trained the fugitive Sunni’s under its secret service organisation CIA to destabilise the Syrian government led by the Baath Party. The Obama administration funded and supported the rise of the Ukrainian fascists, who have since caused havoc in the Eastern European state and has escalated war tensions in the region, as the US government wanted to chastise the Russian government and reduce its influence on the Eastern European region. The very same Obama administration is fuelling the formation of an anti China military entente in South East Asia by pulling the stooges of Washington DC from the region, like the Philippines, Taiwan, South Korea, Japan, Australia and lastly India. The goal of the US is to counter the growth of the Chinese nation, which has turned into an economic super power and to establish its own puppet regime in Beijing through an extensive large scale war.

The military entente against the Chinese government can only be strengthened by developing more semi and neo colonies in the neighbourhood of China, for which the US has penetrated in Myanmar by forming an alliance with the Junta and its puppet parliamentary bloc. For the very same reason the US has acted as a patron for the Japanese Prime Minister Shinzo Abe’s campaign to revive the Japanese militarist fascism, and to forward its cause the US will leave no stone unturned to attack the DPR Korea under false pretext.

The biggest challenge to this notorious aggression against a sovereign country will be the fake reporting by the biased corporate owned media, which showed its loyalty to the US during the 2003 Iraq aggression, during the 2014 Gaza holocaust by the Zionist Israeli regime. The corporate media, the ‘mill of lies’, is all set to build up public opinion in favour of an American sponsored aggression against the DPR Korea and will keep on fabricating facts and figures to establish its own causes.

During this period, it is very essential that we do not believe anything as gospel truth, which the corporate owned media will try to spoon feed us. The people must remember that the media houses are controlled by the big monopoly and finance a capital institute which has great interest in turning the DPR Korea and its neighbouring China into its own colony and exploit the work force and natural resources of the place to build up its own big fortune. The importance of the independence of DPR Korea remains in the fact that it seriously challenges the might of the US, which acts as the self styled principal of the global political-economic affairs due to its military and economic dominance on the whole world polity.

A war will be of course a choice of the US monopoly and finance capital to exploit more profit from such new colonies that they can acquire, however, the experience of Iraq and Afghanistan has made them more cunning, as they will thoroughly do an economic implication study before launching any unilateral campaigns against a sovereign state. Though they will take some to finalise the war plan, but it is certain from their engagements and aids to the South Korean regime that the US will ignite the war, and will shift the blame on the DPR Korean government.

The people of DPR Korea wants peace, however, they will never support peace at the condition of humiliation. Being a peace loving society the DPR Korean people will try all avenues to reach to a peaceful solution with their Southern brothers, but an act of aggression against them will definitely be retaliated by strong counter strike, with a strength that can wipe off the entire hostile forces from the Korean peninsula, in recent military briefings the Supreme Commander of the Korean People’s Army, Kim Jong Un declared.