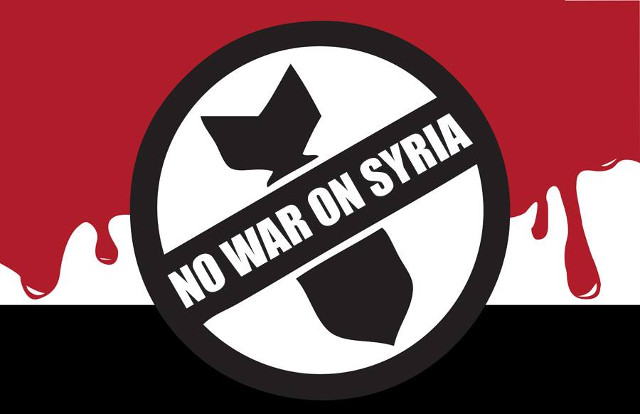 Following an alleged chemical attack in Khan Sheikhoun of ISIS held Idlib province in Syria on 4 April, the Donald Trump regime had launched a unilateral missile attack on Syria on 6 April. The chemical gas attack at the terrorist held Idlib province of Syria killed 60 and injured more than 120 people. Though the Syrian Arab Army and the government of Syria has denied any involvement in such a macabre crime against humanity, the US-led Western imperialist bloc that has been funding the terrorist campaign against the Syrian government, declined to accept it and without an iota of evidence kept levelling charges of genocide and war crimes against the government of Syria led by President Bashar al-Assad.

So far, the independent reportage claimed that an arsenal of chemical weapons stored by the terrorist auxiliaries, working on behalf of the US-led coalition to topple the government of Bashar al-Assad in Syria, may have been hit by an air strike by the Syrian government or the Russian Air Force. The attack may have released the toxic gas stored by the ISIS, Al Qaeda and other terror groups on Western payrolls in the air, which could have caused the death of the victims. Yet, the real incident is still under investigation and no report is placed with authentic details until now. But the corporate controlled mainstream media has already blamed Assad and Russia for the deaths due to Sarin gas, which is supplied by US puppet Turkey’s intelligence service to the ISIS terrorists. This is the hilarious part of the tragic story.

Fifty-nine Tomahawk missiles were fired at the Ash Sha’irat airbase of the Syrian Arab Army from the USS Ross and USS Porter located in the Eastern Mediterranean Sea, according to the official statement issued by Pentagon spokesman Captain Jeff Davis. According to the Russian Ministry of Defence, only 23 out of the 59 missiles could hit the airbase located 40 km south of Homs. Syrian sources claimed that nearly 10 military personnel and nine civilians, including four children were killed in the US missile attack on Homs. While the missile attack caused severe damages to the Syrian airbase at Ash Sha’irat and destroyed six Mig 23 fighters, the ISIS and the Al-Nusra (Al-Qaeda in Syria) were in a jubilant mood since the Donald Trump regime targeted an important airbase that played a key role in the anti-terrorist operations of the Syrian government.

The ISIS fighters in Syria used the US missile attack as a cover to intensify their attacks on Homs and Palmyra. The Syrian government led by President Bashar al-Assad has played a pivotal role, along with Russia, Iran and the Hezbollah guerillas, to thwart the dreaded terror outfits like ISIS, Al-Nusra, their auxiliaries like the Free Syrian Army and other terror groups funded by the US, the EU, the UK, and their lackeys in the Middle East like the Wahhabi Saudi Arabia, Zionist Israel, Jordan and Turkey. The US involvement in the Syrian war is increasing manifold since the fascist leader Donald Trump usurped power in Washington D.C. in January this year, contrary to the promises of the very fascist leader, to do otherwise, made during his election campaigning.

Just after the news of the purported chemical attack in Khan Sheikhoun became public and the Western mainstream media that Trump despised started producing fabricated tales of “war crimes by Assad regime”, Trump met the press and declared that he is going to make an 180° volte-face vis-a-vis President Assad and Syria and will eventually follow the lead of the Obama regime and John Kerry-Hillary Clinton formula.

Nikki Haley, the die-hard Zionist Israel supporter and the envoy of the Trump regime in the UN, performed a high pitch melodrama in the UNSC earlier on 5 April, which resembled the type of drama Colin Powell and the other henchmen of mass murderer and war criminal George W. Bush regime performed nearly 14 years back in the UNSC to pave the way for the aggression on Iraq. Surprisingly, neither the GOP nor the Trump regime changed anything in the script that the Bush-Powell duo used to rake up support for their criminal endeavour in Iraq that killed nearly one million people.

Nikki Haley performed poorly than the Powell and could not show any CIA created evidence, except few photographs her assistant downloaded from the internet stock image galleries, to prove that the government of Syria is complicit in the war crime. Her footsteps were followed soon by the other lapdogs of the US empire in the West; Matthew Rycroft, the British envoy to the UN, the French ruler Hollande, the German Chancellor Merkel, the British Prime Minister’s lackey cum former toady scribe of the monarchy, Boris Johnson, etc. hopped on the bandwagon of levelling allegations against the government of Syria by using the choicest words from their dictionary, used in the diplomatic parlance to vilify foes.

The Russian and the Syrian envoys kept denouncing these false allegations levelled against the Syrian government, which could not dare to lose the faith that the broad masses have on it by resorting to such grievous crimes. However, neither the Western terror funding governments nor the mainstream corporate media highlighted the logical points raised by Russia and Syria and kept babbling their own stories to hoodwink the common people and turn the Syrian war into a favourable opportunity for their lackeys like the ISIS and Al Nusra.

A few weeks ago the Russian air strike on the terror outfits in Idlib revealed the presence of chemical arsenal with the ISIS auxiliaries in the region. The deadly Sarin gas was also present in their arsenal and a chemical attack by these terrorists on the hospital cannot be ruled out for several reasons but one, it will raise a false flag and help these terror forces to wean away mass support from the camp of the Syrian government and the Syrian Arab Army.

All Western press and corporate neo-con puppet politicians are citing the reports published by the White Helmets, a criminal gang managed by the SIS of the UK to execute terrorist operations in the Syrian territory. The White Helmets are neither the official civil volunteer organisation of Syria nor are they involved in any real rescue and relief operations in Syria, except for in the ISIS-held areas where they work as the subsidiary of the Salafist terror organisation and provides it safe passage during severe attacks by the Syrian Arab Army.

The Western mainstream media is downplaying any attempt to raise questions about the authenticity of its stories as “conspiracy theories” and are constantly carrying out a vitriol against the Syrian government and the Russian presidency, which has now crossed the earlier set limits. Donald Trump suddenly became their man of honour and the entire American corporate world, the media tycoons, the Democrats, the liberals, etc. are plunging into the boat of Trump, who is acting as Noah for the monopoly capitalist system now at the moribund stage.

Bolivian envoy to the UN, Sacha Llorenti, vehemently criticised and condemned the US-led coalition’s attempt to forge information, fabricate tales to build up support for its military endeavour. Llorenti used the photograph of war criminal Colin Powell and reminded the UN the cost of the Iraq war. As the Russian envoy Safrontov also criticised the US for its unilateral actions and the Western hypocrisy in dealing with such war crimes, the US envoy Haley and the Trump regime’s representatives kept pursuing all courses they could to censure the Russian and other opposition views.

This unilateral and unprovoked US missile strike on Syria showed that the US government will increase its military intervention in Syria and may even reverse its previous strategy of staying officially aloof from the battleground and using the puppets like the ISIS, Al Qaeda, White Helmet, etc. to win the war against the Syrian government and President Bashar al-Assad. The increase of intervention will mean the deployment of ground troops and it cannot be successfully done until they secure some areas either by themselves by annexing Syrian territory, or they use the areas seized by their puppet Kurds and ISIS-led terror brigade. The military deployment and operation will also cost the US tax-payer a fortune and to ensure that the people don’t question, the Trump regime will seek help from the very mainstream media that the man called spineless propagandists, a few months back. The lies and deceits are the major weapons of the US and the corporate mainstream media houses with a global dominance are easily peddling the lies throughout the world to build the case against the government of Syria strongly.

An increase in military deployment in Syria must avoid any anti-war protests at home and thus the US, the British, the French, etc. are working hard to portray the Bashar al-Assad led Syrian government as a predator to build up mass support and to excommunicate those who raise the banner of protest against the US decision in their home turf. The allegations against the Syrian government will not stop at the purported chemical strike only, rather it will take up newly concocted tales by the SIS and CIA funded White Helmets and Syrian Observatory for Human Rights, who happen to be the only two Syrian news and information sources of the US-led Western coalition.

Very pleasantly, Donald Trump managed to rally the entire brigade of right-wing fanatics and fascists of the world under his banner as soon as he launched the attack on Syria. People like McCain, Hilary Clinton, Democrat leaders who called him a Russian puppet until yesterday, are now praising his efforts to punish, what they call a “barbarous regime” in Syria.

It seems finally Donald Trump has managed to get the entire US ruling class to support his endeavour and finally tore the mask of being an ally of the Syrian government’s war against terrorism. Trump revealed once more that the US regime is a decoy tool in the hands of the monopoly and finance capital controlled big corporations and no one can overturn the policies, especially the foreign policies of the empire, irrespective of their political rhetoric. The onus is now on the Syrian people to dig the graveyard for the US and its Western allies and their terrorist puppets like the ISIS and Al Qaeda in their country and they can do so only by rallying under the leadership of Bashar al-Assad led government that is battling the aggression on their nation with might and valour. The responsibility is now also upon Russia to prove its loyalty to the alliance not just by words, but deeds in the battlefield that will hasten the doom of the US plans in Syria.