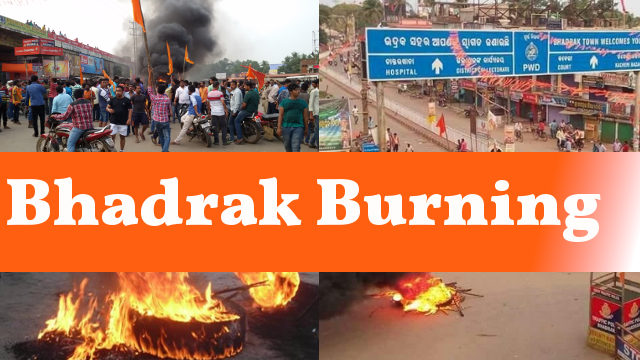 The coastal town of Bhadrak, Odisha, burned in a pyre of a communal riot following a state-sponsored rampage by the Bajrang Dal goons in the town on 6 April. Under the leadership of the RSS led units, mainly Bajrang Dal hooligans, many houses, temples, mosques and shops were gutted by the mob. The riots are doubted as planned and executed by the Bajrang Dal to ensure smooth polarisation of the Hindu voters, following its pan-India model, and to provide leverage to the Marwari business establishments in the town of 1.5 million people, where this migrant minority community owns more than 60 per cent of the businesses and trades. No one was seriously injured during the mob rampage.

Violence erupted after the Bajrang Dal leadership of Bhadrak alleged that three Muslim youth had posted some “objectionable comments” on their post on Ram Chandra in Facebook. The incident, which could have been resolved by simply filing a complaint with the police, was used to incite the incensed Hindutva mob to launch attacks on the Muslim areas of the town. The police remained mute spectators when the Muslim localities were looted and plundered and RSS activists sitting far away in Bengaluru and Mumbai kept fuelling the fire by using the social media platforms to broadcast lies and rumours. Local Biju Janta Dal members and leaders also supported the Bajrang Dal activists in their rampage, which impacted the law and order in the town.

It is not the first time that Bhadrak went through such a large-scale communal rampage organised primarily by the RSS led Hindutva family with an eye on the political power at Bhubaneswar. In 1991, a similar riot took place in Bhadrak around the same time of spring, after a group of non-Odia RSS activists started sloganeering threatening messages using a loudspeaker during a Ram Navami procession in the town, which irked the Muslim bystanders, who were earlier enjoying the show. The protests by the Muslims against such intimidating slogans of the RSS members kindled the fire of a riot that engulfed the whole town during the heydays of Advani’s Ram Mandir movement.

Twenty-six years later, the same scheme was re-applied by the RSS and the VHP outfits like Bajrang Dal. They have selectively posted anti-Muslim rhetoric on all social media channels so that any zinger by any Muslim or Christian social media user against such contents can be used to instigate mob violence against the whole community in Odisha. Bhadrak became the best choice for them as it has a sizeable Muslim presence.

Following the model they are now using in neighbouring West Bengal, the RSS functionaries used the local Marwari hoodlums and businessmen to carry out the violent attacks against the Muslim community, who traditionally lives in 14 localities, called Chaudah Mohallah in Bhadrak. Though Muslims are 2 per cent of the population in Odisha, nearly 35 per cent of Bhadrak’s population is Muslim, which makes it an easy target for the RSS and Bajrang Dal, as it gives them a volatile ground to acid-test Hindutva’s anti-Muslim schemes in Odisha, where the Hindutva brigade traditionally fought mostly against the Christian and Roman Catholics.

The Marwari community started migrating to Bhadrak since the mid-1960s and tricked their ways to monopolise the cloth, stationary, grocery and other trades in the town by ousting the Odia Muslim and Hindu business owners. By building up their communal dominance in Bhadrak and by bribing the administration with their ill-gotten wealth, these Marwari and non-Odia traders brought the RSS and VHP functionaries from different states like Rajasthan and Uttar Pradesh to build up their militaristic organisation in the town, which would act as the armed units for the Marwari traders against the Odia Hindu and Muslim communities and Urdu speaking Muslim community of Bhadrak.

A communal riot is a great opportunity for these Marwari businessmen of Bhadrak to take down the remnants of the Odia traders, both Hindus and Muslims, by burning down their shops, go-downs, warehouses, etc. While the Marwari funded RSS goons burn down both Hindu and Muslim properties, especially shops and establishments, hatred brews within these two pre-dominant communities, as each of them considers the other as the culprit that took away their bread and butter from them. As the age-old tradition of unity, love and fraternity between the Hindus and Muslims of goes for a toss in Bhadrak, the Marwari businessmen thank the RSS and their affiliates for providing a boon to their prospering business.

The Bajrang Dal activists and the leaders of other Sangh outfits affiliated with the RSS and the VHP are mostly non-Odia outsiders, mostly from Uttar Pradesh, Madhya Pradesh and Rajasthan. There are many Marwaris among them and the Ram Navami celebration is organised every year at the behest of the Marwari traders, who are the most liberal donors helping the saffron forces to consolidate their base in Bhadrak and other parts of Odisha. They are also the harbinger of the alien cultures like Ram Navami and Dussera to a state where people had different religious and spiritual aspirations two decades ago.

Odisha is a hotbed of the Bajrang Dal led Hindutva terror group and since the 1990s numerous attacks on the minority Christian, Roman Catholic and Muslim community were executed in the state and hundreds of Christians and Muslims were butchered by the saffron goons. It was Bajrang Dal again this time, plundering and vandalising properties when Bhadrak was put on flames and the common Hindus and Muslims were thrown into a tumultuous situation. The Bajrang Dal rowdies looted from both Muslim and Hindu shops and establishments to ensure that the local Odia traders, or the remnants of them, are thrown into abject poverty and are subjugated to the interests of the Marwari and non-Odia business establishments.

Over the last couple of years, the issue of derogatory remarks against Hindu gods and Muslim prophets are blown out of proportion and is used to rake up communal trouble at places where the communal elements are powerful. In Maharashtra, Karnataka, etc. riots are incited by using any loose cannon’s remarks against the Maratha or Hindu Kannada rulers and eventually such riots result in the death of numerous people and destruction of property worth millions. Similarly in West Bengal, Assam and Uttar Pradesh, communal tension is created by rallying incensed semi-literate Muslims by using any incident of derogatory remarks against the founder of Islam, Muhammad.

As these riots are planned, organised and executed, the state machinery remains mute spectators and often remains complicit in such crimes when the saffron brigade organises them. In the last couple of months, the Bajrang Dal and other outfits related to the VHP vigorously campaigned against the Muslims and Christians in different parts of Odisha and with the help of the biased Brahminical administration headed by the former BJP aide Naveen Pattnayak. The RSS lead Sangh family is opening new organisational fronts in each and every district of the poverty-ridden province of the country, especially in the areas inhabited by the tribal people to convert them to Hindutva.

On one hand, the RSS led Sangh Parivar is trying to promote the Hindutva of its brand throughout the state with full vigour and vitality so that the Naveen Pattnayak led Biju Janta Dal (BJD) government can be pulled down and a new government led by the BJP can be established in the state by polarising the majority Hindus and tribal voters under the Hindutva umbrella. On the other hand, these Hindutva agents are helping the corporate houses to annexe on the lands and resources of the poor tribals by tranquilising the latter using brute force of religious command through the Brahminical structure imposed on the newly-convert and indoctrinated tribal people.
To achieve this political goal and to strongly spread the message of communal hatred against Christians and Muslims, the Hindutva outfits led by RSS are continuously opening indoctrination camps in the remotest parts of the state, while the Bajrang Dal and other outfits linked with the VHP are actively forming cow vigilante and other militia in the state to ignite violent clashes between the majority Hindu and minority Muslim and Christian communities.

The riot in Bhadrak couldn’t have been successful if the BJD government’s administration acted with a vision to curb violence and nail down the culprits. Except imposing Sec. 144 in the town, the administration did nothing to quell fear reigning among the common residents and it let the culprits attached with the RSS and other Hindutva outfits roam freely. It showed the complicity of the BJD administration in this crime, which is very similar to its involvement in the brutal atrocities committed against the Christian community of Kandhamal by the RSS and Bajrang Dal led goons a decade ago. The BJD’s hand-in-glove relationship with the Modi government and its secret support for the agenda of its erstwhile partner BJP is going to cost the people of Odisha very dearly.

To prevent the recurrence of Bhadrak riot, the people of Odisha needs to be more vigilant against the conspiracies of the riot-monger forces coming to their land from other places, especially the cow belt of North India. Unless these goons are identified and resisted from carrying out the nefarious designs of the RSS led saffron camp, peace of Bhadrak, as well as Odisha, will be impacted very badly and violence will continue to affect the lives and properties of the people of the state.

If you want to contribute a story to People’s Review then send us your article and a short introduction to peoplesreviewin@gmail.com