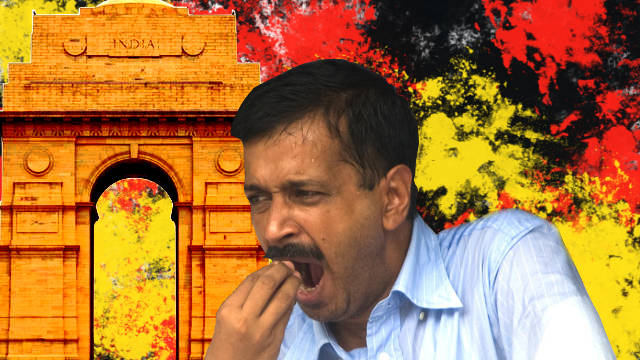 Delhi was a tight slap for the Modi government when amidst the rage of the Modi Tsunami the capital city-state gave three out of 70 seats to the BJP while giving a thumping majority to the Aam Aadmi Party (AAP) – 67. The BJP MLAs were ridiculed and said they just need a scooter to reach the assembly, citing the prevalent practice of triple riding on two-wheelers in the city. However, gradually over a period of three years, the Modi regime has ensured that the verdict is turned upside down and the AAP is left bewildered by exploiting the fissures within the party and now by using the Election Commission to disqualify 20 MLAs of the AAP using the office-of-profit accusation.

Now that the AAP, a right-wing party, which itself is a conglomerate of an elite and upper-middle-class political entity that looks up to the corporate world for support and assistance, feels that it is weakened in the Assembly by the Election Commission that works as an unapologetic puppet of the Modi regime. It’s evident that in case Arvind Kejriwal’s government is forced to go for a bypoll, the BJP will secure all of these 20 seats, thanks to the palms greased in the Election Commission by Manoj Tiwari and Amit Shah. The new and advanced EVMs that are blessed with technology sourced from Narendra Modi’s beloved Zionist Israeli terrorist Benjamin Netanyahu’s Mossad, can certainly help the BJP to sweep the bypolls by 20-0 and the Congress remaining a non-player as usual.

Communal polarisation of Delhi’s populace had never been this intense as it’s now under the Modi regime. Though the city had a severe communal psychosis since the new residents of the colonies of South Delhi formed after 1947 were refugees from West Punjab, their communal outlook was sheathed for long until the Emergency, when the RSS and the VHP took advantage of the absence of any genuine opposition to hijack the anti-Emergency political space, which later snowballed into a massive support for Madanlal Khurana-led Punjabi-Brahmin-Baniya alliance, formed in the backdrop of the Ram Mandir agitation after the 1984 Sikh genocide.

Thanks to the neo-liberal economic regime and the boom of the service sector, Delhi houses a major chunk of upper-caste elites and upper-middle class people who flocked to the city from Uttar Pradesh, Haryana, Punjab, Bihar, Jharkhand and other parts of the country. As the neo-liberal economy demarcated the class distinctions and antagonisms more acutely than ever, the rich and the super-rich started to flaunt their political clout and using the new-found power to tweak and turn things to benefit them. The Congress and the BJP continued to feed to these evil aspirations of the super rich and rich of the capital city, who also have a greater share in the political discourse of India.

Aam Aadmi Party capitalised on the anger and frustration that brewed in the middle-class, lower-middle class and among the beleaguered poor of the city, exasperating due to the severe socio-economic exploitation they have been subjected to by the rich, upper-caste Hindu ruling class. The AAP exploited the immense anti-establishment sentiments among the people and drove them towards the greater goal of consolidating power in its own hands.

For the BJP, it was crucial to bring the majority of Delhi’s middle-class Hindus to its favour and consolidate the gains of Hindutva polarisation that started with a rejig since 1992 in the city. The massive victory of the party in all Lok Sabha constituencies during the 2014 election couldn’t be consolidated in the 2015 Delhi Assembly Election as the poor and the middle-class, defying the Hindutva threats and bully, rallied behind the AAP.

When AAP formed the government and Narendra Modi was ridiculed, before he could even complete a year in office, the BJP decided to pull down the AAP government with force to comply with its policy of one country, one religion, one language and one party. The ambition of AAP chief Arvind Kejriwal to become a significant opposition player in all states where the BJP is in power irked the RSS and since then it pulled the strings to pave the way for toppling Kejriwal government.

Be it the contention between Lt. Governor Najeeb Jung and Arvind Kejriwal or the dissent within the ranks and files of the AAP, especially those led by ex-RSS men Kapil Mishra and Kumar Vishwas, the incumbent regime was exposed for its opportunism and its policy paralysis to the middle-class, who started buying more Hindutva dosage and loathing the AAP. Few pro-poor measures of the AAP also divorced the party from its largely middle-class support base because due to an extreme class contradiction prevailing between the privileged middle-class and oppressed poor, any good done to either will irk the other.

The rich and the middle-class of Delhi, the latter can be termed as super-rich in tier-2 and tier-3 cities, are publicly anti-poor and they are antagonistic to any political party that works for the cause of the poor in reality. Even small cosmetic measures of the AAP like improving government school education, public health system, promoting poor children’s education in public schools, providing discount on electricity bills up to 200 units, general amnesty for water bills, etc. are looked upon with despise by the rich and the middle-class, majority of whom are upper-caste privileged Hindus, who would demand quite unapologetically that the government stop spending on welfare programmes for the poor and rather spend the money behind them to help them live a more luxurious life than ever.

Moreover, the guerilla propaganda of the Modi regime, which aims at discrediting AAP government for everything, even for the faults of the Modi regime, has paid good dividends as now Kejriwal’s rating has fallen significantly among the politically influential elites and upper-middle class of Delhi, who despise Kejriwal for his secular rhetorics. These upper-caste Hindu elites and middle-class, who are the political decision makers of Delhi, are desperately rallying under the Hindutva flag to ensure the establishment of a fascist, Hindutva-dominated vegetarian regime in Delhi.

It will be a tough job for the AAP to fight these waves of Hindutva at a time when the Modi regime has monopolised its grip over each and every institution of the executive and judiciary to see things mould the way the RSS wants them to. The Election Commission and the Rashtrapati Bhawan are now appendix of the Modi regime and pleading with them will bear no significant fruits for the AAP.

Narendra Modi and his sycophants based in Delhi and outside wants to turn AAP and Arvind Kejriwal into political non-factors to secure the lead in Delhi and other states, where the people have clearly refused to consider the Congress’ plea that it’s the only party capable of providing an alternative to the BJP. The Modi government is compelled to decimate the right-wing AAP in order to make the right-wing space largely shared by it and the ailing Congress Party, which is easier to be blamed for all the woes of India.

If AAP loses Delhi in the bypoll then there will be no coming back of Arvind Kejriwal and his political movement, a right-wing anti-establishment movement that harped on the support of the rich, middle-class and the corporate houses. The collapse of the AAP and its so-called politics of social change by operating within a predatory anti-people system will make it clear to the working class, the peasantry and the toiled people that neither the system can be cleaned from within and nor the BJP and the entire Hindutva fascist camp led by the RSS can be defeated through the path shown by AAP. Rather the system needs to smashing, only to be replaced with a better one and the BJP and the RSS must be fought through large-scale political struggle that will aim to seize power for the poor and establish a people’s democracy instead of a quasi-democracy of the upper-caste Brahminical bigots.