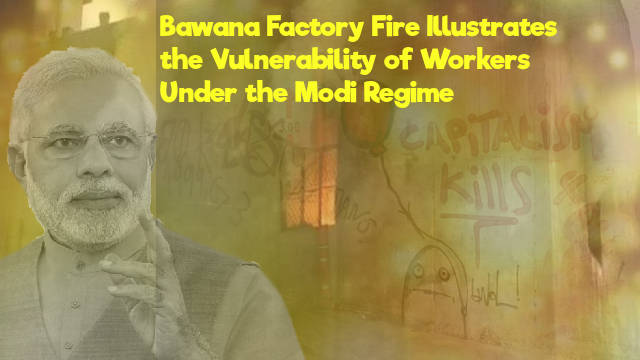 The fire never judges people or things by their value or class, it just burns them and burns them quite unmercifully. The 17 workers charred and choked to death due to the fire in their factory in Bawana of North Delhi, became the collateral damage that the neo-liberal economy has paid to appease its ever growing greed and its desire to exploit more human lives to maximise its profit ratio. Fire safety is merely a standard, a license one can buy by paying some quick bribe. Bawana factory fire is a steady reminder to the exploited working class – they can be grilled, if necessary, to appease the every greedy comprador capitalists and foreign corporations.

Though the police arrested the man who owns the unit, there is certainly a lacklustre attitude on part of the entire administration to crack whips on the comprador capitalists and corporations that run their factories in Delhi’s poorest locality by exploiting the labour of the unorganised hapless workers and by utilising cheap electricity and water provided to them by the Delhi government. Due to the lack of trade union rights, the unorganised workers and the employees of small and middle-scale units aren’t able to organise and protest against the inhuman working condition in which they are forced to work in.

The corporate-controlled mainstream media kept milling the story of the North Delhi Municipal Corporation chief asking her officers to remain quiet on the issue as her municipal corporation granted the license to the factory. It’s not a very rare thing to see a BJP municipal chief, Priti Aggarwal, asking her men to remain quiet on an issue that could be embarrassing for the party and its absolute hegemony in the various municipal corporations that rule and loot Delhi and its poor. There cannot be a second thought on the fact that during each catastrophe, the RSS and the BJP men will stand by the side of the comprador and crony capitalists who fill their coffer with ill-gotten wealth. The skeletons find their place behind the walls.  The skeletons are of the poor, the oppressed and the marginalised.

Mrs Aggarwal is an upper-caste Brahminical Hindutva fanatic, whose sole reason of joining the BJP and becoming the Mayor of North Delhi Municipal Corporation is to help her family accumulate immense wealth by tweaking and twisting the laws and by using the Indian nepotism policy, which allows the family members of people in power a highway to economic growth. She wasn’t doing anything abnormal when she was asking her men to not utter anything against the factory to which her organisation had provided a license to operate. Priti Aggarwal was doing exactly what she and other parliamentary politicians across hues and shades are meant to do, protect the ruling class and its business interest to earn financial and other benefits. There is no scope of ambiguity here because it’s merely the poor workers who are held hostage, their death and injury don’t count for a country that needs double-digit growth by sacrificing its poor at the altar of development.

Narendra Modi government has been fond of fireworks, be it at the border with Pakistan, where shelling is killing soldiers randomly, be it in promoting the usage of firecrackers among the poor children to ensure the people of Delhi choke to death due to smog or be it the firework used to cleanse the cities by physically eliminating the Muslim community, as done in Gujarat, Muzaffarnagar or elsewhere. The Modi government likes firework and therefore, it will allow any industry to violate the fire safety rules and operate under its nose, without delving into the violations to punish the culprits. This is indeed the ease of doing business. It doesn’t matter how many workers are killed, at the end of the day what matters is that the RSS and its offspring receive their share of the booty from the capitalists and crooked corporate tycoons.

More people died due to asphyxiation caused by the carbon monoxide than due to fire in the factory of Bawana on 20 January because the entire building had one narrow exit door and all panicked workers couldn’t get out. These 17 workers were actually murdered by the conspiracy hatched by the BJP-ruled North Delhi municipality and the crooked unscrupulous crony capitalists who run the small, medium and big units in Bawana and other industrial areas of Delhi like Narela, Okhla, Mayapuri, etc.

This grotesque dance of death, caused by the Bawana factory fire, could have been avoided if the government agencies did not stoop before the might of the money paid to them by the comprador capitalists. The lives of these 17 workers could have been saved if the North Delhi Municipal Corporation and Priti Aggarwal had played their role honestly and uprightly. Again, to wish honesty and credibility from RSS-trained Hindutva bullies will be like expecting honey from mosquitos.

The sheer lack of empathy for the cause of the poor, the downtrodden and the working class is a trademark of the BJP’s ultra-chauvinist and jingoistic politics. It’s one of the main reasons why the rich and the upper middle-class love the BJP as their own party. The class contradiction raging between the upper-caste Hindu elite and upper-middle class on one hand and the workers, toiled people and lower-middle-class on the other, is skyrocketing the support for the BJP’s fascist rule at each tier, sans the Delhi Assembly, as the rich and the upper middle-class want to see the swift victory and monopolisation of the political power in the hands of the RSS and the BJP. This means more workers will be forced to die in such places from where the Hindutva camp earns huge commission.

Bawana factory fire tragedy is a reminder for the entire society and the poor people of Delhi that the rich people have decided to do away with them. They will raze the settlements of the poor, demolish hostels for the blind, burn down factories where the exploited workers are tapped, so on and so forth. In the coming days, the greed of the comprador capitalists for excessive profit extraction will compromise more on infrastructure and quality of construction to set-up factories that will be death-traps for the working class.

It’s the foremost duty of the working class to resist the attempt of the comprador capitalists and foreign corporations to kill their class-brethren by forcing them to work in factories that have no security system in place. Only a strong vigorous movement of the working class can force the corporate lackey BJP and its local municipal heads to retreat and take a stock of the situation to prevent such mishaps that can cause large-scale death and destruction. Only a vigorous class struggle of the working class can get it carved in the minds of the unscrupulous capitalist thugs that they cannot consider the workers to be expendable anymore, rather they must treat them with dignity or perish.