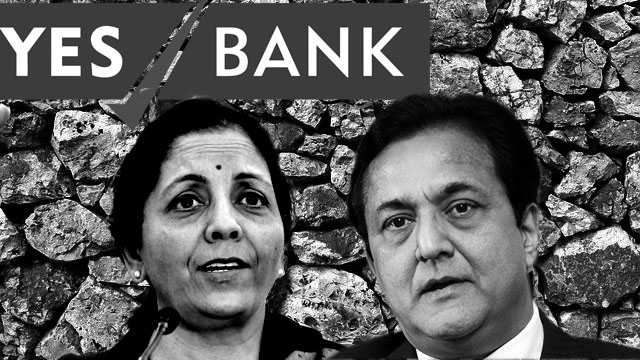 The Yes Bank crisis has given a severe shock to the Indian economy as well as the stock markets, where the bank’s share price fell by 80%. On Thursday, 5 March, the Reserve Bank of India (RBI) imposed a moratorium on money withdrawal from Yes Bank by setting a limit of Rs 50,000 per month for a period of one month. Even an owner of multiple accounts in the bank can withdraw a maximum of Rs 50,000 per month only. The same limits are applied on current account owners as well. A government gazette notification was published with the same information panicking the customers, especially the savings bank and salary account holders.

Finance Minister Nirmala Sitharaman has assured, not quite convincingly though, that the money of the depositors is safe, however, the customers, especially those with no other bank accounts, are fearfully waiting outside the bank’s branches and ATMs. Though the RBI has declared that to pay for medical expenses, education fees, wedding expenses, etc, it will extend the cap to Rs 500,000, the customers aren’t in peace. The collapse of the Yes Bank shows how the non-performing assets (NPAs) of private banks are pushing them towards utmost crisis.

The failure to manage the NPAs is one of the principal reasons that has pushed the Indian banking sector into an abysmal crisis with no sign of recovery. So far, the narrative over the NPA crisis was fixed around the public sector banks (PSBs), which helped both Prime Minister Narendra Modi’s Bharatiya Janata Party (BJP)-led government and the big corporate houses to plant stories in their toady press about the inefficiency of such banks and vociferously advocate for their privatisation. As the Yes Bank crisis opened a Pandora’s box, it caused severe ignominy for those big corporate houses and their associations that have demanded privatisation of PSBs to manage their NPAs. The cats demanding the right to guard the fish was also discussed at the time of the Punjab National Bank scam orchestrated by Modi’s close corporate tycoon Nirav Modi and his uncle Mehul Choksi two years ago.

Now, ironically, the same corporate houses, which hold a significant amount of shares — directly and indirectly — in major private banks as well as in PSBs, are demanding the government to bail out the crisis-ridden Yes Bank, rather than holding the bank’s promoter Rana Kapoor responsible for the chaos. The Modi regime is, unsurprisingly, obliging these corporate houses’ demand for government bail-out of a private bank, which sank due to gross corrupt practices and corporate greed.

On 13 February 2020, Yes Bank said that the RBI has found no divergences from its norms in the bank’s asset classification and provisioning. The RBI even placed its deputy governor, R Gandhi, as a director in the Yes Bank’s board in May 2019, after the bank filed its first-ever quarterly loss in April 2019. Then how the Yes Bank crisis worsened under an RBI deputy governor’s watch?

The Yes Bank crisis is a result of the extreme greed of Indian comprador capitalists and their masters, the foreign monopoly-finance capital-owned corporate houses, who took huge loans from the bank and others, without bothering to return the amount, leave alone paying the interest. The estimated NPA of PSBs in India is Rs 9.5 trillion. The PSBs are the most vulnerable ones as they have liberally untied their purse strings to appease the corporate houses that oiled the ruling parties of India since the early 2000s. The private sector banks aren’t in a better position and have been portraying a rosy picture in their books to hoodwink investors and customers.

In December, the RBI stated that after rising for seven years, the NPAs of the PSBs started falling from March 2019. The RBI thanked the Modi regime’s Insolvency and Bankruptcy Code (IBC) for the fall of the NPAs to 9.1% in March 2019 from 11.2% in March 2018. However, if the IBC was as effective then the Yes Bank crisis wouldn’t have happened.

Sitharaman named Anil Ambani’s crisis-ridden Reliance ADA-linked companies, the debt-ridden IL&FS, the DHFL, Vodafone, etc, of being defaulters, whose loans hiked the NPAs of the Yes Bank. So if the Yes Bank is accused of gross financial mismanagement by granting loans without due diligence, then there is also a big question on the intention of these companies.

Why did these companies, the top corporate entities, take loans when their internal financial situation is known well to them? Why would the highly-paid highly-qualified risk analysers and finance experts at both the banks’ side and that of the borrower corporate houses raise the red flag during such borrowings that would become NPAs?

To appease the corporate houses demanding a bailout of Yes Bank from the mire, the Modi regime is forcing the PSB major State Bank of India (SBI) to invest in 49% stakes of the crisis-ridden bank. The investment will be of Rs 24.50 billion and will stress the SBI’s own resources and impact its own liquidity. The RBI has placed Prashant Kumar, a former deputy managing director of SBI, at the helm of Yes Bank, and it’s clear that through the SBI, using its money, the Modi regime will catapult Yes Bank, while it itself moves ahead with the catastrophic plan of PSB mergers to pave way for large-scale privatisation of these banks.

The Yes Bank crisis has exhibited two major points. Firstly, private banks are vulnerable to NPA crisis and that’s because the corporate entities that own these banks, mismanage the funds and push the banks to an absolute crisis. Secondly, even though the corporate houses oppose the philosophy of bank nationalisation, they won’t show an iota of shame demanding a bail-out from the government at the time of crisis. This calamity won’t end at Yes Bank only. Rather, almost all of the top-notch private banks, starting with ICICI Bank — notorious due to Chanda Kochhar’s corrupt dealings with Videocon’s Venugopal Dhoot — are at the brink of a major crisis, which is ticking like a time bomb. With the private banking sector’s crisis, the middle class, which remained immune so far from the banking sector’s crippling and cheered for communalism, will also reel under the juggernaut of the BJP’s gross financial debauchery.